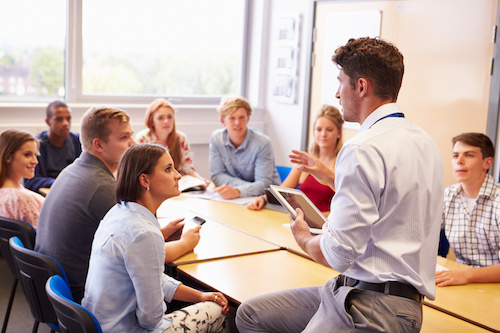 The “adjunctification” phenomenon is a familiar concern to most recent Ph.D. graduates, as well as a recurring criticism of perceived trends in faculty employment. One professor recently wrote that it was a professional “shame.”

This issue seems to have hit a boiling point in the past few years, with a multitude of articles and reports putting forth a narrative about tenure track faculty positions being replaced by part-time adjuncts as a cost-saving measure. The combination of lower pay and less job security resonates among scholars who have attempted to make a living from one or more of these positions.

Some simple statistics lend credence to the adjunctification thesis. The percentage of faculty who hold adjunct appointments increased precipitously over the past four decades. According to Department of Education, adjuncts made up approximately 22 percent of the instructional workforce in 1970. Today that number sits just shy of half of all faculty, leading many critics and activists to conclude that traditional full-time academic employment is being phased out.

But what if a fundamental assumption of the adjunctification narrative is wrong? What if there were a different explanation for the growth of the adjunct market, or one that did not involve replacing full-time faculty?

As concerns about the adjunctification of the universities reach a fever pitch, the statistics unambiguously point to a continuously shrinking adjunct workforce.

Despite the common narrative’s intuitive resonance, the instructional workforce of higher education is not being “adjunctified” in any conventional sense. In fact, full-time hiring in U.S. academia has increased every year since the early 1990s. While adjunct hiring rates grew as well for most of this period, they actually peaked in 2011 and have been on the decline ever since.

This pattern reversal has gone almost entirely unnoticed and many higher education commentators remain in denial. The American Association of University Professors, for example, recently asserted that adjunct hiring “continued to trend higher” in its most recent academic employment report—even though its own cited statistical source shows otherwise.

Six years ago adjuncts reached almost perfect parity with full-time faculty, with about 762,000 professors employed in each type of position according to the Department of Education’s IPEDS survey. Recently released preliminary numbers for 2015 reveal that full time faculty positions have surpassed the 800,000 mark. The most recent adjunct numbers dropped to a position just shy of 740,000, meaning the university system has actually shed over 20,000 adjunct positions on net during the same period.

These data reveal a strange paradox of academic employment. As concerns about the adjunctification of the universities reach a fever pitch, the statistics unambiguously point to a continuously shrinking adjunct workforce. The main reason sits just beneath the surface of the data and derives from another well-known pattern in U.S. higher education: the bursting of the for-profit university bubble over the same period of time as the recent adjunct contraction.

Now that the for-profit bubble is bursting due to issues of fiscal solvency and a government crackdown on the standards used by for-profit accrediting bodies, the adjunct workforce is experiencing its own parallel contraction.

For-profit institutions were in fact a primary driver in the adjunct boom that started the early 1990s. While colleges and universities of this type differ widely in product quality and accreditation standards, they also tend to rely upon adjunct instructors at disproportionately high rates. The adjunct workforce at a typical not-for-profit college or university averages between roughly 30 to 40 percent of the faculty, depending on the institution type. By contrast, the typical for-profit institution relies on adjuncts for more than 90 percent of its teaching duties.

As for-profit institutions grew, so did the concentration of adjunct positions they brought with them. Now that the for-profit bubble is bursting due to issues of fiscal solvency and a government crackdown on the standards used by for-profit accrediting bodies, the adjunct workforce is experiencing its own parallel contraction.

The statistics support this alternative explanation for the adjunctification phenomenon. At the start of the boom in 1994, there were 345 for-profit campuses in the United States. This figure blossomed to 1,451 campuses in 2012, but then dropped to 1,262 for-profit campuses at the start of the 2015 school year. It has likely declined even further with the closing of for-profit giant ITT Tech amid accreditation issues in September 2016, and with similar ongoing financial problems at other for-profit colleges.

As Figure 1 shows, the for-profit sector was the largest contributor to the adjunct boom that happened between the mid-1990s and its peak in 2011. When for-profit adjunct positions are separated from the totals, adjunct hiring growth in the same period assumes a relatively stable pattern that directly parallels the expansion of full-time faculty positions.

Note that this finding does not diminish the many problems of salary, rank, and job security that often characterize adjunct employment. Rather, it shows that these problems are acutely felt in for-profit institutions.

Traditional not-for-profit colleges and universities have proven more resistant to adjunctification on the whole. While adjunct use at these institutions has increased numerically, it is nowhere near the boiling point that much of the adjunctification rhetoric claims.

What, then, drives academic employment trends? A recent study of the education workforce by Jason Brennan and myself suggests they follow demand for college degrees. For the past 40 years, university hiring of full-time faculty has closely tracked overall student enrollment numbers. When for-profit campuses are excluded from the picture, American universities have consistently maintained a stable ratio of about 1 full-time professor to every 25 students.

These figures are representative of the entire university system. This does not mean that there are 25 students in every classroom, or that large public universities adhere to the same ratio as small liberal arts colleges. The ratio does however reflect a system-wide responsiveness to student enrollment demands. By implication, full-time positions on the whole are not being “adjunctified” and replaced by lower-paid part-time jobs, though additional adjunct hiring suggests that many universities are trying to offer supplemental course times and additional subjects of instruction through the use of a greater number of part-time instructors.

Many issues still arise from the changing higher education employment market. Issues of adjunct pay, job security, and work conditions remain a concern. The full-time academic market also faces separate issues of contingent employment and the growth of non-tenure track faculty. Adjunct ranks are not actually exploding in numbers though, despite this common belief. And if the current trajectory of the for-profit education sector continues, we should expect a further contraction in the size of the adjunct workforce.

No, There Is Not a “Neoliberal” Poltergeist in Higher Ed