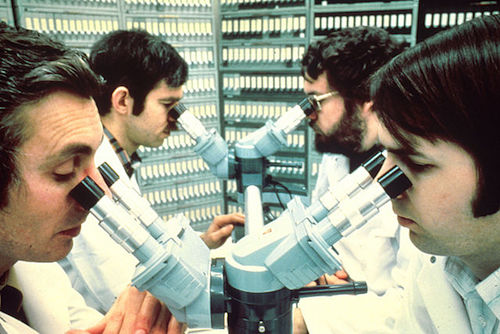 The term “microaggression” was coined in 1970 by Harvard professor Chester Pierce, who declared that “Every Black must recognize the offensive mechanisms used by the collective White society, usually by means of cumulative proracist microaggressions, which keep him psychologically accepting of the disenfranchised state.”

His phrase lay dormant until 2007, when a number of professors began watering it, fertilizing it, and giving it a perfect environment to grow in—the academic world. So successful were their efforts that in 2015, “microaggression” was the Word of the Year according to the Global Language Monitor.

It has become extremely popular on college campuses. Students have leveled complaints against faculty members for their insensitive microaggressions against them, such as correcting their grammar. And college officials have eagerly embraced the concept, instituting workshops and seminars for faculty on how they must avoid microaggressions.

Some schools have created lists of words or phrases deemed to be microaggressions since they might conceivably cause offense to someone in a protected group. For example, it is a microaggression to say “America is a land of opportunity” because a member of some group might take issue with that idea.

The microaggression concept has been used by progressive student groups to demand changes they want, such as including items on student end-of-term evaluations of professors relating to their use of microaggressions—and that faculty members who use them be punished.

But what is the basis for this beehive of activity? The proponents claim that there is evidence to show that microaggression is a real concept and that members of minority groups suffer mental health problems as a result of them. Now, some scholars are taking a critical look at all of this and concluding that there is little or no basis for the microaggression furor.

One scholar who thinks that the microaggression concept is much ado about nothing is Althea Nagai, a research fellow at the Center for Equal Opportunity. She specializes in statistical analysis and has written a sharply critical article for the journal Academic Questions entitled “The Pseudo-Science of Microaggressions.”

Nagai writes that a “tsunami” of microaggressions has swamped American higher education and now even targets liberal and progressive faculty and administrators. The problem is that the scholarly foundation of research into microaggression is feeble. Scholars working in this field openly declare that they reject what they call “Eurocentric epistemologies” and objectivity. What that means, Nagai observes, “is that they reject the methodology and standards of modern science.” (Italics in original.)

The scientific method calls for sufficient sample sizes, unbiased questions, replicability of results, and modern statistical analysis. The research done to prove the validity of the microaggression concept and its policy implications, on the other hand, is rooted in subjective storytelling that “enables the implementation of a highly politicized agenda and places a social change agenda above objective research.”

Take the basic question of whether members of minority groups perceive and are damaged by the microaggressions that supposedly swirl around them. The researchers claim that this has been established, but has it? Nagai looks at the research here and immediately notes that the way it has been conducted relies on the use of biased questions. For instance, a small group of people might be asked, “In what ways have others made you feel ‘put down’ because of your cultural values or communication style?”

Nagai explains the problem with that approach. “After such prompting by the interviewer, respondents would be more likely to find what the research is looking for.” This isn’t the way to find truth, but it is a way to “prove” what you’ve decided you want others to believe.

Another defect in this research is that it relies on small focus groups where peer pressure dynamics and a desire to please the interviewer can lead to very unreliable results. “One or two participants may end up controlling the whole group,” Nagai writes.

Making matters still worse is the fact that microaggression “research” is mostly done on college campuses with people from the academic community. That fact, Nagai argues, further contaminates the studies: “At minimum,” she writes, “any student, faculty member, or employee could be turned in and face administrative inquiry, or worse, should they give an ‘unapproved’ answer.” It’s bad enough that the people whose responses provide the data for microaggression research are led to give certain answers, but worse still that some of the people may fear to register any contrary responses.

Summing up, Nagai thinks the science behind the microaggression project is very weak. Nevertheless it suffices for the interests of the researchers and activists who count on compliant college officials to fund more research, add more “diversity” staff, and hire more consultants and trainers in their quixotic campaign against microaggressions.

In the same vein as Nagai’s article, Emory University psychology professor Scott Lilienfeld has recently published a paper in the journal Perspectives on Psychological Science entitled “Microaggressions: Strong Claims, Inadequate Evidence.” (The paper at this time is only freely available to researchers.)

Lilienfeld points out that while overt racial prejudice apparently has to a great extent died out in the U.S., microaggression proponents claim that it has not really declined, but merely “manifests in subtler forms than it did decades ago.” The fight against “color-blind racism” must therefore continue the work of the work of the original civil rights movement.

After careful analysis, Lilienfeld finds “negligible support” for all of those suppositions.

One of his many criticisms of the MRP matches Nagai’s point that the research foundation is biased. Lilienfeld writes, “The focus groups used to generate candidate microaggression items…have consistently been self-selected to include group leaders and participants who are strongly predisposed to believe in microaggressions….” The research program, he argues, is badly undermined by its “mono-source” bias.

Another problem he sees is the claim that microaggressions cause adverse mental health consequences—e.g., that those who suffer the cumulative effects of microaggressions will have shorter life expectancies. What the research neglects, Lilienfeld observes, is the impact of “negative emotionality” (which is the “pervasive temperamental disposition to experience adversive  emotions including…hostility, irritability, and perceived victimization”) in the people studied.

“In light of the virtually wholesale neglect of negative emotionality in the MPR,” Lilienfeld writes, “it seems premature to advance strong causal assertions regarding ties between microaggressions and mental health outcomes.”

Summing up these two scholarly critiques, there is no justification for the frenzy to prevent microaggressions on campus.

But could it perhaps be true that the frenzy itself leads to bad outcomes?

In this 2016 Wall Street Journal article, psychologists Jonathan Haidt and Lee Jussim argued that the constant emphasis on race and group identity found on many campuses, including microaggressions, was harmful. Programs to increase “diversity” are likely, they wrote, “to damage race relations and make campus life more uncomfortable for everyone, particularly black students.”

Specifically regarding programs and policies meant to eliminate microaggressions, they write that they will “backfire and increase racial tensions.” How so? “The term itself,” they write, “encourages moralistic responses to actions that are often unintentional and sometimes even well-meaning. Once something is labeled as an act of aggression, it activates an oppressor-victim narrative, which calls out to members of the aggrieved group to rally around the victim.”

The frenzy over microaggressions seems to be another instance of the damaging trend Professor Clay Routledge recently wrote about—harping on tiny things that may divide us rather than on the common humanity that should bring us together.