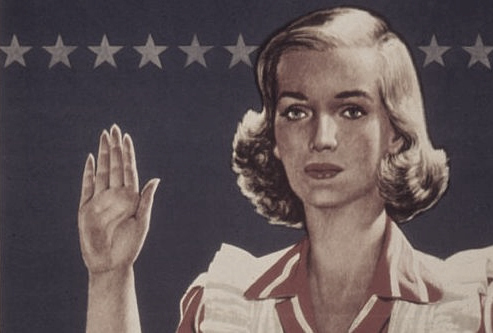 One of the worst features of America in the 1940s and 50s was the persistent demand for national loyalty oaths. In those days, people were expected to declare their support for the U.S. and if they didn’t, they could be blackballed, expelled, or otherwise punished.

The ideological fervor for conformity abated for decades, but has recently returned on our college campuses in the form of mandatory “diversity statements” by faculty members and especially prospective faculty members. The difference is that instead of having to pledge adherence to America in its battle with communism, the new pledge is adherence to the “diversity” agenda in its battle against a color-blind, merit-driven academia.

This recent paper by the Oregon Association of Scholars illuminates the problem of mandatory diversity statements. While the paper focuses chiefly on schools in the Oregon higher education system, it observes that more than twenty major universities and systems across the nation now require diversity statements for hiring or promotion, including the University of California, Carnegie-Mellon University, and Virginia Tech.

Traditionally, faculty candidates have been evaluated on the basis of four documents: a cover letter, their curriculum vitae, research statement, and teaching statement. Now, a fifth document is being added—a statement in which the individual expresses his or her commitment to “diversity.” That is, how important it is to the individual, how he or she acts to further diversity, and so on.

This is not merely idle curiosity, of course. The diversity statement has a purpose. That purpose, writes the paper’s author, Professor Bruce Gilley of Portland State University, is to weed out non-leftist scholars.

At many universities, he explains, there is an unspoken ideology that “emphasizes group identity, an assumption of group victimization, and a claim for group based entitlements.” On the other hand, “Classical liberal approaches that emphasize the pluralism of a free society, the universalism of human experience, and the importance of equality before the law have been regarded as invalid.”

Scholars who don’t demonstrate enough zeal for the former or any sympathy for the latter are put under a great disadvantage. The ideological purists who often dominate in hiring and promotion decisions don’t want dissidents in their schools if they can be kept out.

They disagree with former Stanford provost John Etchemendy, who recently wrote, “Universities must remain forums for contentious debate and they cannot do so while officially espousing one side of that debate.” Contentious debate (at least over many political issues) is not what they want at all and diversity statements help them achieve that dubious goal.

What sort of statements are good in the eyes of the diversity regulators? Here is one example, from the statement of an anthropology professor. She said that she focuses “on how not to thoughtlessly reproduce the standard white and Western model of legitimate knowledge.” It’s a leftist cliché that there are other, superior ways of knowing than those of the “white and Western model,” but professing that notion does nothing to help students of any race to learn. Sadly, statements like that earn the faculty member high marks.

We have reached the point where there are workshops on how to write an effective diversity statement, one that will help a hiring committee “determine whether you are going to be the kind of colleague the department wants to have.” In an article for Inside Higher Ed, “The Effective Diversity Statement,” Professor Tanya Golash-Boza of the University of California advises candidates to focus on “racial oppression, sexism, homophobia, transphobia, ableism and other commonly recognized forms of oppression.”

But what about scholars who have just devoted their time and energy to mastering a discipline and teaching it? Golash-Boza suggests that they shouldn’t waste time trying to craft a strong diversity statement. Don’t try to fake a commitment to diversity if you don’t really have it. Unless you’re truly obsessed with the world’s problems as she sees them, go somewhere else.

Within the Oregon higher education system, the paper notes many disturbing trends involving both diversity statements and the wider ideological agenda they help to facilitate.

At the Oregon Health and Science University, faculty and prospective members are evaluated on their “cultural competency.” That is measured by the individual’s “professed and demonstrated participation in ‘diversity and inclusion’ activities, rather than by evidence of effectiveness in pluralistic settings.” And the school’s Diversity Action Plan calls upon administrators to track and report on “participation in diversity events” by members of their departments.

In 2015, Oregon State instituted a required statement from faculty on their “contributions to equity, inclusion, and diversity.” Among other things, individuals are expected to discuss their plans to spend time “advocating for normative and policy change.” The message delivered is quite clear: show that you are an enthusiastic diversity supporter if you value your job.

At Portland State, the school’s Diversity Action Council has a list of 44 questions that are to be asked of faculty applicants including “the role of diversity in shaping your social style,” and how he or she will combat “the pervasive belief that diversity and excellence are somehow in conflict.” Obviously, any candidate who answers that diversity and excellence actually can conflict has painted a target on his back.

The paper’s conclusion is strong and simple: “Universities must eschew diversity statements altogether, along with any forms of ideological signaling.”

Absolutely, but how do we accomplish that, given the fact that diversity zealots are firmly entrenched at many colleges?

Perhaps diversity statements can be challenged on First Amendment grounds. In a famous rebuke to ideology intruding on education, the Supreme Court held in the 1943 case West Virginia Board of Education v. Barnette that the state could not penalize Jehovah’s Witness students for failure to recite the Pledge of Allegiance. Justice Jackson’s majority opinion speaks to the same issues raised by mandatory diversity statements. He wrote:

Struggles to coerce uniformity of sentiment in support of some end thought essential to their time and country have been waged by many good, as well as evil men…. It seems trite but necessary to say that the First Amendment to our Constitution was designed to avoid these ends by avoiding these beginnings…. If there is any fixed star in our constitutional constellation, it is that no official, high or petty, can prescribe what shall be orthodox in politics, nationalism, religion, or other matters of opinion, or force citizens to confess by word or act their faith therein.

Therefore, these mandatory diversity statements, which operate as methods for prescribing orthodoxy among college faculty members, might be vulnerable to a First Amendment challenge.

Rather than waiting for a legal challenge, though, this nasty phenomenon could be stopped quickly by legislation.

The Higher Education Act is currently before Congress for reauthorization and quite a few good amendments have already been suggested. (Here, for example, are several suggested by the National Association of Scholars.) We could end the use of “diversity statements” if Congress amended Title IV to say that no school that receives federal funds may require any current or prospective faculty member to declare his or her position on or actions regarding any political or social issue.

After that, perhaps the Department of Education could send out a “Dear Colleague” letter explaining what that means: no ideological screening for faculty members and a commitment to enforcing it.

In short, let’s exchange the Education Department’s vicious crusade to force colleges into using unfair procedures for handling allegations of sexual assault for a noble one to make them evaluate faculty members only on grounds that actually relate to teaching and research.