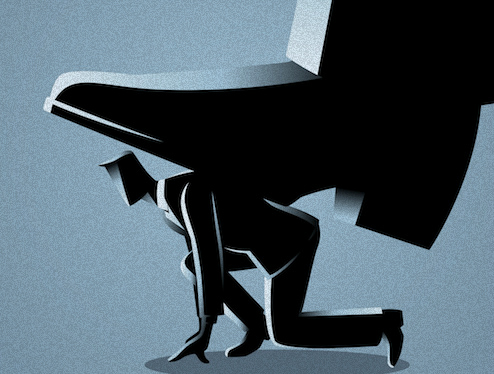 The authoritarianism that increasingly characterizes the American professoriate is on full display in a case involving the master’s program in social work at Rhode Island College (RIC). A student who did not believe that lobbying the state legislature for “progressive” causes was properly a part of his education and suffered for it has filed suit against the school in state court.

This remarkable case started way back in 2004 when William Felkner, a graduate student in the college’s social work program, objected to an internship requirement that called for all students to work to “advance social change.” To the faculty, that meant advocating the sorts of “progressive” policies they favor, but the conservative Felkner did not wish to advocate policies he found philosophically repugnant. He therefore accepted instead an internship in the administration of then-governor Donald Carcieri, a Republican.

That bit of independence was too much for Professor James Ryczek, who reported Felkner’s deviance to the chair of the master’s program, Lenore Olsen. She then informed Felkner that he could no longer pursue his degree at RIC.

Writing here in 2005, Greg Lukianoff, then the director of legal and public advocacy at the Foundation for Individual Rights in Education (FIRE), said, “Forcing a person to publicly state one thing when he or she privately believes something else is one of the hallmarks of a totalitarian state. It is shocking that (RIC) President Nazarian would allow this.”

Felkner filed suit against the college in Rhode Island superior court in December 2007, where the legal skirmishing lasted for years. Finally, in October 2015, the judge dismissed his complaint. Was she right to do so?

Arguing that she was not and that the Rhode Island Supreme Court should take the case are FIRE, the Cato Institute, and the National Association of Scholars. In their amicus brief to the Court, those organizations contend that the U.S. Supreme Court’s First Amendment jurisprudence makes it clear that the college (a state entity) trampled on Felkner’s rights.

“The entirety of the record shows that Defendants required Felkner to engage in lobbying related to a partisan issue,” the brief states. “While RIC social work students could choose among a range of issues to lobby the Rhode Island General Assembly, the Social Work 531 syllabus explicitly required students to engage in ‘policy advocacy’ in order to ‘achieve social justice.’”

Going back many decades, the Supreme Court has held that government may not compel belief among citizens, especially in schools. In 1943, the Court ruled against West Virginia for punishing students who were Jehovah’s Witnesses when they wouldn’t salute the flag and recite the Pledge of Allegiance. The Court declared that such a requirement by a state “transcends constitutional limitations on their power and invades the sphere of intellect and spirit which it is the purpose of the First Amendment to reserve from all official control.” And in the 1972 case Healy v. James, which involved a decision by the administration of Central Connecticut State University to forbid establishment of a chapter of Students for a Democratic Society on campus, the Court declared that there is “no room for the view that First Amendment protections should apply with less force on college campuses than in the community at large.”

And in U.S. v. United Foods, the Court held that government cannot require anyone to lobby in support of a position with which he disagrees. Justice Kennedy wrote, “First Amendment values are at serious risk if the government can compel a particular citizen, or a discrete group of citizens, to pay special subsidies for speech on the side it favors….”

RIC’s requirement that students in its school of social work must participate in specific kinds of advocacy fits in poorly with the Court’s views on the First Amendment. It is analogous to the compulsory Pledge of Allegiance in the West Virginia case, except that rather than giving a pledge to support a governmental symbol, here the college requires its students to pledge their allegiance to the idea that activist government is essential to helping people in need. Why can’t a student just master the course material without being forced to advocate policies that he believes to be wrong and counterproductive?

That is exactly what RIC is trying to do. It seeks to dragoon all of its students into social activism, provided that it is the “right” kind of activism—the kind that favors increased governmental spending and control.

Imagine the consequences if the case stands with the trial court’s dismissal of the claim that the college has violated Felkner’s rights under the First Amendment. That would embolden professors across the nation to push ahead with their desires to make “social justice” activism an integral part of the curriculum. Mandatory student participation in a host of political conduct would get the green light. Aggressive professors would fear no legal difficulties if they say to students, “You can either work to push our political agenda or go somewhere else.”

That illiberal, unscholarly approach should not be acceptable anywhere and shouldn’t be legal in any public educational institution.

The amicus brief sums up the stakes in Felkner precisely: “If the trial judge’s decision is allowed to stand, public college administrators will be presented with a road map for an end-run around decades of First Amendment jurisprudence governing student speech rights.”