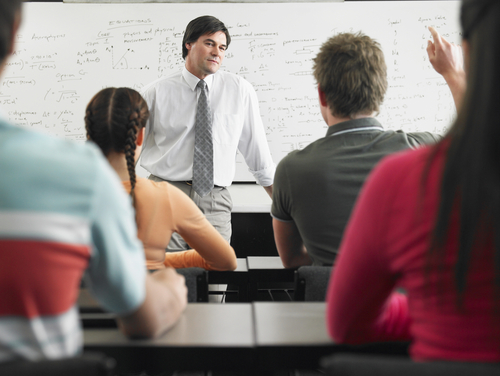 I doubt that many people think of college professors as harried and overburdened to the point where they’re putting their very health at risk, but two Canadian English professors, Maggie Berg and Barbara Seeber, say they are in their book The Slow Professor: Challenging the Culture of Speed in the Academy.

Even though most professors teach no more than three three-hour courses per semester, the authors allege that they’re being run off their feet by the insatiable time demands of what they call “the corporate university.”

Berg and Seeber state, “Academic work is by its nature never done; while flexibility of hours is one of the privileges of our work, it can easily translate into working all the time, or feeling that one should.” Moreover, academics are drawn into their careers out of idealism, but “The very idealism that drives intellectual and pedagogic endeavors is easily manipulated by the university, which, like many other corporations, uses the rhetoric of family and community…to boost productivity.”

That’s an interesting take on the environment of higher education. Those in charge, the presidents, provosts, and deans, allegedly take advantage of the idealism of faculty members to get them do more than they need to or should. They’re exploiting the workers for their own gain, since higher productivity helps the university’s bottom line.

Perhaps that seems overwrought, but Berg and Seeber have come to the same conclusion that the late Professor Henry Manne did, namely that the supposed distinction between for-profit and non-profit management is spurious. In this 2014 Pope Center essay, he argued that all education is for-profit education.

Oddly, Berg and Seeber present data showing that actual corporate chief executive officers feel less stress and more ability to get their work done than do college professors working in their non-profit environment from which people are rarely fired. According to an MIT study they cite, 62 percent of college faculty reported that they feel “physically or emotionally drained at the end of the day,” while only 55 percent of the CEOs said that they felt that way.

Berg and Seeber maintain that the typical college professor is worked to the point of near exhaustion with the relentless and unreasonable demands on their time made by the corporate university—for research and publications, for meetings, for documents quantifying their performance via student learning outcomes, for grading papers and student conferences, for course design and preparation.

Things are so out of balance in the current climate, they state, “that we need to give ourselves permission to eat, bathe, and pay bills.” Professors supposedly never have time now for conversations with colleagues, meaningful interactions with students, and especially for deep, creative thinking.

The argument that the typical college professor is overworked, incidentally, runs contrary to what many others say. David C. Levy, a former university chancellor, wrote in this 2012 Washington Post article, ”Faculty members teaching 12 to 15 hours per week for 30 weeks spend only 360 to 450 hours per year in the classroom. Even in the unlikely event that they devote an equal amount of time to grading and class preparation, their workload is still only 36 to 45 percent of that of non-academic professionals.”

For the sake of argument, however, let’s accept that professors are overworked and consider the damage that it’s said to cause.

Berg and Seeber claim that students are harmed by the way the corporate university overworks the faculty. “Faculty stress,” they write, “directly affects student learning. We know from experience that when we walk into a classroom breathless, rushed, and preoccupied, the class doesn’t go well; we struggle to make connections with the material and our students.”

Of course, un-stressed professors might also show up at class in that condition (I have known some), but Berg and Seeber probably have a point here. It’s bad management that works the employees to the point where customer service suffers and it may well be true that professors teach less effectively when they’re frazzled.

Students probably would be better off if their professors could concentrate more on them and less on other things that administrators demand. The trouble is that effective teaching is something that can’t be measured, so it tends to be overlooked in favor of things that can, especially research publications.

One might conclude that universities should stop demanding research and publication quotas from the faculty, or at least scale those demands back. Allow idealistic scholars like Berg (here’s her CV) and Seeber (here’s her page) to take all the time they need for research. “This ‘supermarket’ model of research,” they write, “is what the corporate university promulgates and what we need to resist. Corporate time speeds up and instrumentalizes research as well as objectifies those who produce knowledge and the ‘subject’ studied.”

And what “subject” do Berg and Seeber study? You can see that they share a strong interest in animals in literature. I can’t say how valuable further research they’d do in their field would be, but if they believe that they could have all the time they want for it without the financial support of their corporate universities, they’re mistaken.

Their “Slow Professor” manifesto calls for academics to “alleviate work stress, preserve humanistic education, and resist the corporate university.” Exactly how those goals are to be accomplished is, however, left rather murky.

A threat the authors see to “humanistic education” is the growth of online courses. (They don’t say that such courses are part of the “speed” problem; they just don’t like the idea.) If professors don’t want to participate in distance learning, they shouldn’t have to, but that isn’t going to stop its growth.

How about alleviating stress? That may be important for more than a few professors. Sadly, however, the book is of scant value as a self-help manual in stress reduction.

Berg and Seeber say that one of the best things a professor can do in that regard is to enjoy teaching. If you aren’t enjoying your teaching, how can you start? Their chapter “Pedagogy and Pleasure” contains advice such as, how to enter class (especially, how to deal with nervousness), how to pause for effect (a pause before beginning “improves the teacher’s confidence and delivery, the atmosphere in the room, and the students’ attention”), how to breathe (shallow breathing signals anxiety whereas easy breathing conveys confidence and helps students to concentrate), and using humor.

I’d be very surprised if any overly busy professor who wants to slow down and fight stress finds the key to his or her serenity in the book.

The Slow Professor is a tedious, self-absorbed, word-salad of a book. Still, it prompts this thought: Why have colleges and universities become so “corporate”?

Fifty years ago, such a complaint would have been inconceivable. College leaders were true-bred scholars, far more concerned about the school’s academic standards and offerings than rankings or “productivity.” They didn’t pester the faculty with demands for data on student outcomes. What changed?

In the U.S. at least, it was government policy. When the federal government started pushing “access” to higher education in 1965, the formerly slow, scholarly college world began changing. We got more and more students spending much more money. College presidents who knew how to maximize the money intake became hot properties; those who didn’t were gradually put out to pasture. And as the benefit of college degrees started to become questionable, legislators began demanding “accountability” measures.

In short, the old, rather laissez-faire world of higher education was undone by government intrusion.

So, paradoxically, what’s at the root of the complaints aired by these ultra-progressive professors is the progressive project of turning college from a market good into a mass entitlement for all. To the extent that the dreaded “speed culture” exists, it’s one of the unintended consequences of that intervention.