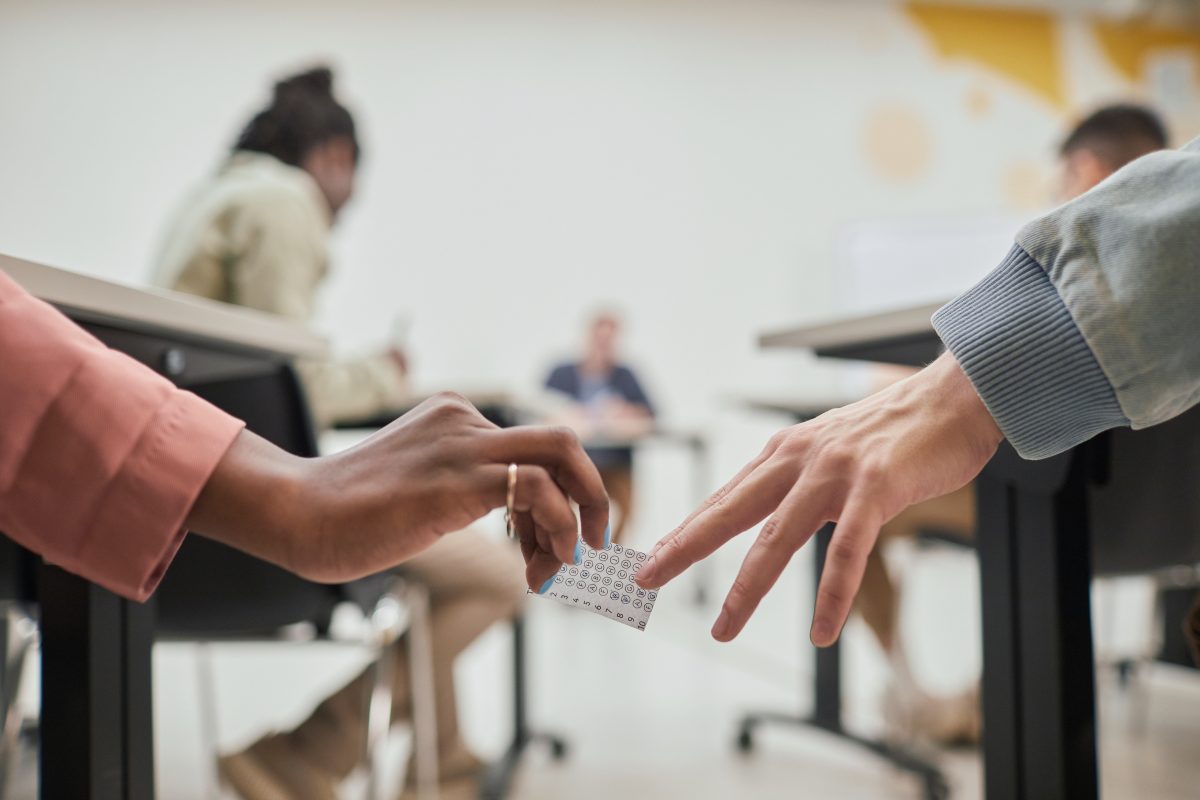 Students can survive by cheating unless their professors enforce academic integrity standards. We presume such enforcement exists, but my personal experience suggests otherwise. Let’s be honest: professors face unpleasant consequences if they resist cheating, but no consequences if they look the other way. Professors respond to their incentive structure like other living beings.

I was naive to the culture of cheating when I was a student, so I was naive as a professor. My odyssey into the cheating world began when a student complained after an exam. She’d witnessed many infractions while I just sat there reading a book—everything from whispering to passing notes to passing a whole scantron test. I was tempted to dismiss her the way “tattlers” are often dismissed on the playground, but then she said the words I cannot forget: “It’s unfair to students who study.”

So I asked her for details, and she made it clear that this was not an isolated incident. From then on, I could not collect my salary in good conscience unless I did what I could to run a classroom with integrity.

It felt very awkward at first. I hated staring at the class during tests. Such surveillance seemed to violate campus norms, and I didn’t know what I’d do if I saw a lapse in integrity. I would rather be reading a book, but that wouldn’t be fair to students who study.

I looked to colleagues for support, but I got just the opposite. The professors I asked were quick to insist that preventing cheating is not their job. “I’m not a policeman,” they’d say. “It’s up to them if they want to learn.” They’d say this in almost the same words, which I found eerie. And they’d say it with high-mindedness, as if their indifference to cheating served a greater good.

I could not agree because I had young children. To me, it was not “up to them if they want to learn.” I wanted my children’s teachers to uphold academic integrity because I saw how easily bad habits take hold when permitted. That means I owed as much to other people’s children.

I focused on prevention. I created multiple versions of tests so that copying from a neighbor wouldn’t work, I spaced our seating during tests, and I methodically collected tests afterward so they couldn’t be shared with people coming for makeups. But each preventive measure led to another mode of cheating and another preventive measure. It reminded me of the roaches in my Manhattan apartment: the more you look, the more you see. In Manhattan, I had trained myself not to look. I averted my gaze so automatically that the roaches no longer existed for me. Is this what faculty do with cheating?

Despite my focus on prevention, I saw egregious evidence of cheating sometimes. Once I caught two students whispering during a test, and when I checked their scantron afterward, they had the same wrong answers for half of the questions. I couldn’t just ignore this, so I asked a colleague about the procedure for reporting it. She said, “you don’t want to report it.” I asked why, and she cited the paperwork. Was she really suggesting that I neglect my responsibility out of laziness? Or was there more that she wouldn’t say? I asked another colleague and got the same answer. So I went straight to the department chair and asked for the official policy.

He told me which administrative department to get the forms from, and then said “but can’t you compromise?” I was taken aback by this comment because “compromise” implies that I was partially to blame. The word has a double meaning, of course, so if I compromised by neglecting to report it, I would ironically be compromising my integrity. In fact, I was glad to fill out the forms. It seemed a small price to pay for dumping the problem onto someone else’s lap.

In the midst of these events, the administration announced a new policy on cheating. It forbade any punishment of cheating unless the course syllabus includes a definition of cheating and a description of potential consequences.  Fine, I thought, and added that to my syllabus.

I asked colleagues how they were wording it and was shocked to find that no one intended to do it. They were effectively binding themselves to ignore cheating. And again, they’d present this as a virtue in almost identical words: “The students don’t think of it as cheating. They think of it as cooperating, and isn’t that really better than our individualistic culture?” I knew this mindset well, having spent my whole adult life in it. But I knew they were hiding behind the greater-good argument to protect themselves from the risk of conflict.

And I knew that the greater good was not really served. I saw how students had trouble with basic skills. I saw my own children, and the children of colleagues, slide into bad habits when there was no push-back. I lost confidence in our institution and took early retirement.

That was fifteen years ago, and since then, I’ve seen new hurdles appear in the path to academic integrity. For example, the quest for higher graduation and retention rates has led to the practice of publicly shaming professors who give Ds, Fs, and Ws. But there’s no shaming of professors who tolerate cheating to get off the DFW list. The implicit incentive structure is obvious.

Incentive structures have more power than we realize. No one consciously admits to lowering standards to avoid conflict, but our conscious brain is literally not on speaking terms with our limbic brain. The limbic system we’ve inherited from earlier mammals cannot process language. It responds to the world by releasing threat chemicals or reward chemicals. These chemicals are so motivating that we find them hard to resist. When these impulses conflict with social goals, our verbal brain resolves the dissonance by constructing a socially acceptable motivation. Then, we believe our own spin because the limbic brain doesn’t report its impulses in words. You can honestly say “I didn’t lower standards to protect myself from conflict” because your limbic brain never explicitly said that.

I began studying the limbic brain when I retired. I trained to be a docent at my local zoo and studied the animal-training methods needed to run a zoo. Animal management professionals design incentive structures carefully to create desired behaviors. Reward chemicals and threat chemicals do the job without the need for conscious cognition.

The more I learned, the more I thought about the reward structures that teachers face. Teachers are rewarded for lowering standards and threatened for upholding standards. No one says this in words, and everyone can construct a polite verbal veneer to hide it from their own consciousness. Students pay the price, and they don’t know what they don’t know.

Because administrators face the same incentive structure. They know they will be rewarded if they turn a blind eye to integrity problems, and they will face threats if they uphold standards.

So it is ultimately up to the taxpaying public. The taxpayer must look beneath the fine words that academics generate to see the real incentive structures. Public policymakers must design an incentive structure that rewards learning rather than statistical outcomes.

Of course, “the public” is made of humans with the same limbic brain. When your grade is at stake, or your child’s grade, you may like a bit of lowered standards. But if you “learn to think,” as academics are fond of saying, you can see how that affects the greater good.

We humans are tempted by short-run rewards and panicked by short-run threats. It has always been that way. Yet people have learned to look beyond that in order to educate their children.

Loretta G. Breuning, PhD, is Founder of the Inner Mammal Institute and Professor Emerita of Management at California State University, East Bay. She is the author of many personal development books, including Habits of a Happy Brain: Retrain Your Brain to Boost Your Serotonin, Dopamine, Oxytocin and Endorphin Levels. Dr. Breuning’s work has been translated into eight languages and is cited in major media. Before teaching, she worked for the United Nations in Africa. Loretta gives zoo tours on animal behavior, after serving as a Docent at the Oakland Zoo. She is a graduate of Cornell University and Tufts. The Inner Mammal Institute offers videos, podcasts, books, blogs, multimedia, a training program, and a free five-day happy-chemical jumpstart. Details are available at InnerMammalInstitute.org.

Cheaters Never Prosper—Or Do They?