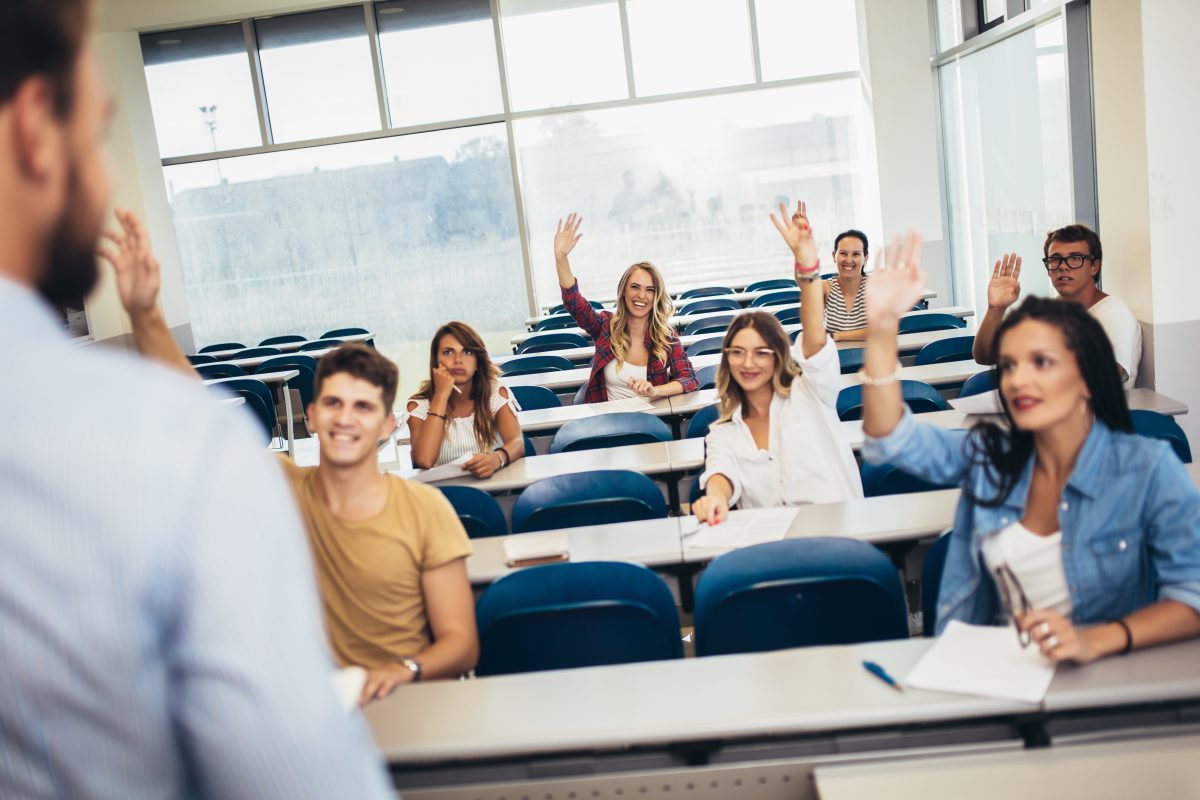 Many college campuses aren’t as hospitable to open inquiry and free expression as they should be. However, there is reason for hope. Numerous individuals and organizations across the country have dedicated themselves to the task of helping policymakers, administrators, faculty, and students understand the value of civil dialogue and disagreement.

One of those organizations is the Bipartisan Policy Center (BPC) in Washington DC, which has its own Campus Free Expression Project. The project is headed by Jacqueline Pfeffer Merrill, who works to promote a campus culture that is “diverse, inclusive, and open to robust intellectual exchange.” Before coming to BPC,  Pfeffer Merrill was the executive director of the Fund for Academic Renewal, which is a program of the American Council of Trustees and Alumni (ACTA). She has also previously been a faculty member at St. John’s College and the College of William & Mary.

The Martin Center recently spoke with Pfeffer Merrill to learn more about BPC’s work to improve dialogue on college campuses. This transcription has been edited for clarity and length.

Could you give me a little bit of background on the Bipartisan Policy Center, what is its mission, and its goals?

The Bipartisan Policy Center is a Washington DC think tank that strives to bring the best ideas from both parties to promote security and opportunity for American families. We have a wide variety of issue areas in which we bring together experts from across the political spectrum. And we know from that work that bipartisanship is really difficult. In fact, we’re the only organization in Washington DC that has bipartisan in its name. Almost three years ago now, BPC decided that it wanted to have a Campus Free Expression Project.

Tell me a little bit about the Campus Free Expression Project.

The Campus Free Expression Project works with campus leaders to develop policies, programs, and curricula that make for a welcoming environment for robust intellectual exchange. We’re really concerned that colleges prepare students to be able to have conversations across principled disagreements and to work constructively with people with whom one might have a very different point of view. That’s why BPC was interested in starting this project and the spirit in which we’re undertaking this work.

As you said, this initiative is only a few years old. What were some of the first projects that you undertook?

Unfortunately, people aren’t as comfortable as we would like for them to be in order to have a fruitful conversation.

We wanted to start working with those who had experience in this area and learn to be a convener in this area, which is one of the things that I think BPC is an expert in. One of our first panels featured a number of speakers who had been disinvited from giving a presentation on a college campus. We had on that panel Bob Kerrey, senator and governor of Nebraska, who had been disinvited from giving an address at a university due to his pro-choice stance.

On that same panel, we also had noted constitutional and political theory scholar Harvey Mansfield, who had been disinvited from giving a commencement address. That panel shows that restrictions on freedom of expression are not just of concern to those on the right or those on the left. We’ve seen challenges to open exchange from the right and from the left.

What are some other specific obstacles to free expression on college campuses?

There are a lot of challenges to open exchange on college campuses, which is why we need a lot of strategies to try to restore a campus culture of freedom of expression and frank and open dialogue. One of the challenges that we find— this an important one today—is social media. It has really transformed conversation on college campuses, even on residential campuses where people could be face to face. A Knight Gallup 2020 survey of undergraduates found that 58 percent of students said that most discussion of social and political ideas takes place on social media, even though only 29 percent of the students said that such conversation is usually civil.

That means that people are engaged in fractious and uncivil conversation [on social media]. It’s a medium that encourages outrage, that silos those who think a certain way, and encourages one to think that people who have different views are bad people. Certainly, it’s not a forum that supports nuanced discussion and debate; you can’t develop an academically robust position in 140 characters.

No, you certainly can’t. How’s the climate on campus when students are in the classroom or attending events in-person? Maybe some of that rhetoric is less intense than it would be online.

Related to that is this phenomenon of self-censorship. Sixty-eight percent of students in the College Pulse survey said that the climate on their campus keeps some students from expressing some of the views that they hold. And if that’s the case— 68 percent of students feel like their classmates can’t express their views on campus—it really means that 100 percent of students aren’t having the experience that they should have on a college campus.

In your own state of North Carolina, [there was the] UNC-Chapel Hill survey of freedom of expression. Real kudos to UNC for that research and for making it so available as a resource for those of us who are concerned about this issue. That survey showed all kinds of challenges to a culture of open inquiry, including in the classroom, where it found that 43 percent of conservatives and 10 percent of liberal students said they were worried about their classroom comments appearing on social media.

That means that students are holding back even when there’s a faculty member in the room providing guidance and guardrails for difficult conversations where people might express different points of view. If self-censorship is taking place in that setting, then what’s worrying is that on the quad, in the dorms, and in other settings— people may be even more cautious about saying what they think. It’s a real obstacle to colleges and universities accomplishing their mission of making students independent thinkers, people who are able to stress test their views and have them challenged, and to graduate as people who are ready to be citizens and civic leaders who can work with people with all kinds of views.

I did hear that the UNC system is going to expand that survey to a few other UNC system schools, so there may be some interesting data there.

And one thing I want to mention about the UNC survey: there is a trope that faculty use their classrooms to indoctrinate students. That was not supported by the survey at Chapel Hill, where students overwhelmingly said that faculty make it comfortable for people to express views across the political spectrum.

Have there been any victories when it comes to campus free speech?

There’s a greater variety of views on college campuses than sometimes appears to be the case. I know that the Martin Center has done terrific work on this question of viewpoint diversity, [including] your work with George La Noue. It’s an area where senior campus leadership can really make a difference on campus by showcasing different points of view and showing that people can have conversations across all kinds of different viewpoints.

Ronald Crutcher, who just finished his term as president of the University of Richmond and serves on BPC’s Academic Leaders Task Force, hosted two series, the Sharp Viewpoint Series and “Spider Talks”— spiders are the mascot of the University of Richmond. Among the many speakers he hosted were pairs like Robby George and Cornel West, two scholars who are friends but who really disagree with one another, and who, in their conversations, model how people can have serious conversations with people who understand the world in a really different way.

Are there any other policy recommendations that you have for campuses?

The BPC has convened an Academic Leaders Task Force on campus free expression. I don’t want to get ahead of our findings and recommendations in our report that will come out later in 2021, but we are looking at a range of recommendations and policies among all the components of the university community. One thing that you and I haven’t discussed yet in our conversation today is the role of faculty. The leadership at the top really matters, but it’s also the faculty who are the ones in the classroom, who are with students. They have the opportunity to model how to have a conversation and present students with all kinds of different ideas. I think that the faculty role is essential to cultivating a free expression culture.

Absolutely. Is there anything else that you would like our viewers to look to for how to improve campus free expression?

I think there’s a lot of work to be done to increase the skills that students arrive on campus with. Eighteen-year-olds arrive on campus, often from communities and neighborhoods where most people were like their own family—that had similar news sources, backgrounds, and political views. It’s hard for students, when they arrive on campus, to learn to have conversations with people who are really different—they have to take more risks in those conversations. I appreciate the work that many colleges and universities are doing to focus on that skill-set: to be a good listener, to be empathetic, and to know that, when you give somebody a hearing, you’re not necessarily endorsing what they have to say.

On FIRE’s website, there’s an interview with one of our task force members, Dan Cullen, who’s a professor of philosophy at Rhodes College, about how he used some of those modules with a class that was not just for first-year students. I think that building those skills is an essential piece of having a robust free expression culture on campus. It’s not enough to have no “speech code” and no restrictions, you need to have people ready and willing and eager to have their ideas stress tested.

I absolutely agree. Those are all my questions, is there anything else that you’d like to add?

I’m looking forward to the release of our report later this year. I think it is so important for colleges and universities to not only transmit a certain body of knowledge to their students, but to cultivate within them the virtues of skepticism, helping them ask: Am I wrong? Is there another point of view that might be better or more complete than my own? [Students need to be taught] to be resilient when they hear ideas with which they disagree, and to have the civic courage to present their own ideas and to challenge others. I think that is how colleges and universities have an important role in contributing to the development of our young people as citizens and civic leaders.