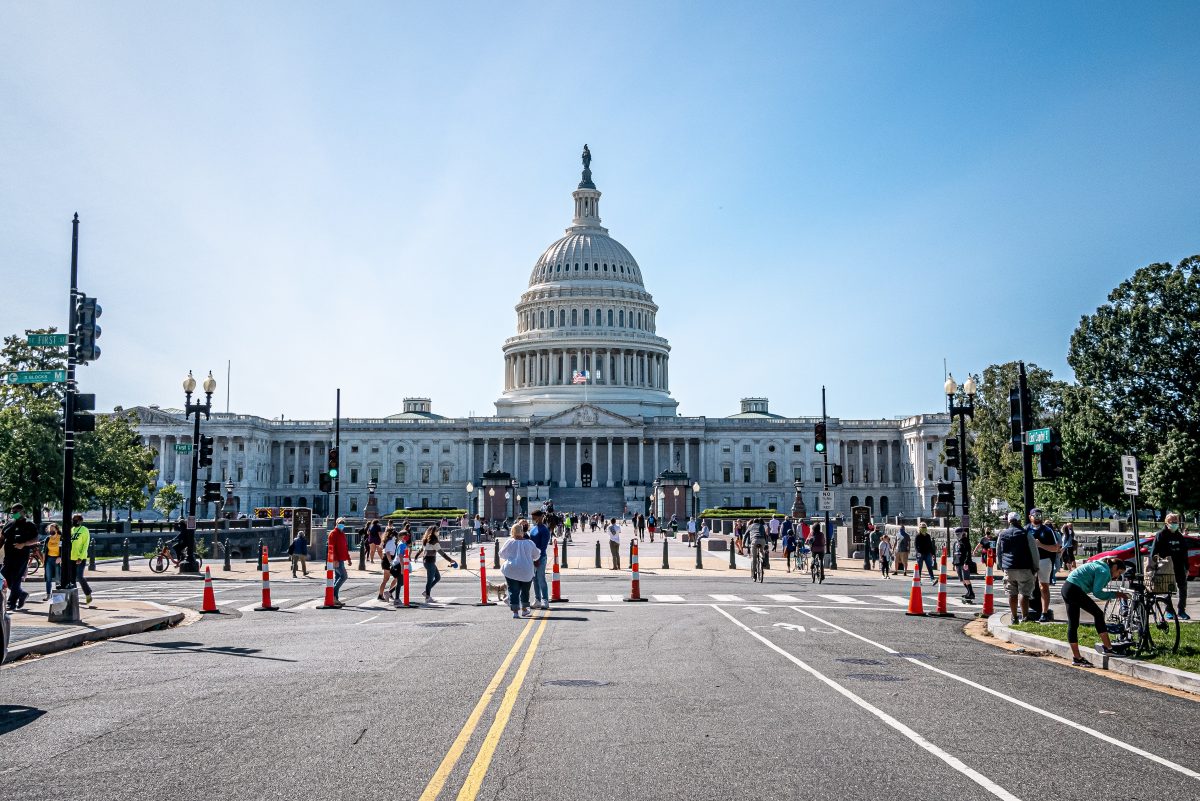 During the Obama administration, Catherine Lhamon worked in the Department of Education as Assistant Secretary for Civil Rights. She was known for her hyper-aggressive approach to Title IX. Now she has been nominated by President Biden for her old position.

Her fate now rests in the hands of Senate Majority Leader Charles Schumer, after her nomination deadlocked before the Senate Health, Education, Labor and Pensions Committee. Schumer can file a discharge petition to bring her nomination to the floor, but that would consume valuable time that Senate Democrats might need for other items.

So we soon will find out how committed Senate Democrats are to restoring the symbol of Obama-era kangaroo courts.

The debate over the Lhamon nomination also has, perhaps unintentionally, revealed a significant shift in the media and legal culture surrounding Title IX and campus sexual assault.

Between 2013 and 2016, press coverage of Lhamon’s crusade was fawning, and only one Appeals Court had issued a ruling favorable to an accused student in a sexual assault case. In Lhamon’s current confirmation fight, by contrast, her supporters have been mostly silent, with her critics on the offensive, amidst a legal environment that has grown far more favorable to accused students.

During her first stint in office, Lhamon rarely if ever received political or media pressure. In her four years, she was subjected to a mere six minutes of meaningful congressional oversight at a hearing (questions from former Tennessee senator Lamar Alexander) and one skeptical congressional inquiry about her policies (from Oklahoma senator James Lankford).

The mainstream media framed Title IX issues in terms sympathetic to her crusade, suggesting that the nation faced an epidemic of campus sexual assault that otherwise left-leaning universities refused to address.

Lhamon was portrayed as a courageous fighter against university bureaucracies indifferent to the suffering of sexual assault victims in their midst. Even an unusually even-handed article, this 2015 offering from the Los Angeles Times, described Lhamon as heading an office of plucky lawyers who “have redefined campus sexual assault as a federal civil rights issue, changed the standard by which allegations must be judged and publicized the names of a growing number of schools under investigation for allegedly failing to respond properly to complaints of sexual misconduct.”

In an extraordinary move on his way out of office, President Obama named this ardent foe of campus civil liberties as the new chair of the U.S. Commission on Civil Rights.

By the time that Biden nominated Lhamon, the policy and legal debate around campus sexual assault had dramatically changed. Amidst a wave of lawsuits from accused students, state and federal courts have issued more than 200 rulings unfavorable to universities. (Lhamon has never publicly acknowledged even one of these court decisions.)

These rulings have included favorable offerings for accused students in the Third, Sixth (three decisions), Seventh, Eighth (two decisions), Ninth, and Tenth Circuits, covering a majority of states in the country. In many of these rulings, courts have cited the actions of OCR during Lhamon’s tenure as possibly contributing to gender-biased campus environments for accused students.

Reflecting this new legal reality, former Education Secretary Betsy DeVos oversaw a painstaking process that created new Title IX regulations that would be fair to both sides. DeVos’ approach earned grudging praise even from liberal editorial boards such as those of the Washington Post and the Los Angeles Times.

Lhamon, by contrast, fumed that the DeVos regulations—which ensured notice, access to evidence, and the right to cross-examination through an advocate—would take “us back to the bad old days, that predate my birth, when it was permissible to rape and sexually harass students with impunity.”

In her Senate confirmation hearing, Lhamon informed Louisiana senator John Kennedy that she still believed the argument presented in her tweet—even as she preposterously maintained that, if confirmed, she would enforce the very regulations she believed empowered rape “with impunity.” (The exchange illustrated how poorly Lhamon handles meaningful oversight.) She was no more persuasive in responding to the committee’s ranking member, Richard Burr, repeatedly refusing to say whether she personally supports a variety of procedural protections for accused students.

During her time in office, there’s no record of Lhamon ever publicly defending the due process rights of accused students in Title IX proceedings.

It’s no wonder that every Republican on the committee—including moderates Susan Collins, Lisa Murkowski, and Mitt Romney—voted no on her confirmation. Committee Democrats, who have a long record of opposing campus due process, unanimously backed Lhamon, although the most moderate Democrat in the Senate, West Virginia’s Joe Manchin, doesn’t serve on this committee and hasn’t publicly made known his position.

Unlike her first stint under Obama, Lhamon also has come in for substantial criticism in the media. The Wall Street Journal has run several editorials urging the Senate to reject her, with the editorial board noting its amazement that after “one of the worst excesses of the Obama years”—efforts to limit “due process in sexual misconduct cases on campus”— Biden had “nominated the same woman for the same job to impose the same standard of injustice.”

National Review ran a piece from me making a similar argument. DeVos herself returned to engage on the issue, arguing that Lhamon’s record disqualified her from service. No major newspaper editorial board, by contrast, has come out in favor of Lhamon’s confirmation. The silence of the New York Times, which so aggressively championed Lhamon’s policies during the Obama years, has been particularly conspicuous.

With her nomination dependent on Schumer’s good graces and the willingness of every Senate Democrat to endorse her tough-to-defend record, Lhamon’s supporters have finally activated themselves. It’s no surprise that accusers’ rights activists would want Lhamon back in charge; after all, no public figure other than Biden himself played a greater role in tilting Title IX procedures in favor of campus accusers than Lhamon.

The line of argument offered to rescue the Lhamon nomination is nothing short of Orwellian.

Brett Sokolow, president of ATIXA (an organization that sells sexual assault adjudication services to colleges and universities), has penned a template letter for Lhamon advocates to send to the Senate’s 50 Democrats. Lhamon, according to the letter, was a “transparency” advocate at the Office for Civil Rights (OCR) who “eschewed ideological dogmatism.”

And then, in the document’s most risible passage, the letter claimed that Lhamon’s “team at OCR also demonstrated that when circumstances indicated a need for Title IX to also be protective of the rights of respondents, including due process rights,” they acted to ensure “fairness to all, not just to victims.”

For this latter proposition, the pressure letter cited a single, obscure resolution letter with Wesley College issued a few months before Lhamon left office. This document was issued not by Lhamon (indeed, there’s no indication that Lhamon had any involvement at all in the case), but by a staffer based in OCR’s Philadelphia office. The letter did not represent OCR guidance and applied only to Wesley; it never was cited by Lhamon during her time in office.

It is, perhaps, the nature of any lobbying letter to senators to be misleading. After all, a strong nominee wouldn’t need rescuing. But the degree of shamelessness in Sokolow’s line of argument (claims that Lhamon was not dogmatic, suggesting that she was a defender of due process) is amazing.

During her time in office, there’s no record of Lhamon ever publicly defending the due process rights of accused students in Title IX proceedings. Indeed, the most significant Title IX guidance document that she issued downplayed the significance of due process, arguing that “a school should ensure that steps to accord any due process rights do not restrict or unnecessarily delay the protections provided by Title IX to the complainant.”

That even Lhamon’s advocates are trying to label her a due process advocate shows that we’ve moved beyond the Obama era in terms of public relations, and that outright indifference to the rights of accused students no longer is acceptable. But there’s no reason to believe that, if confirmed, Lhamon will adopt policies any different from her first, disastrous stint at OCR.

KC Johnson is a history professor at Brooklyn College and the City University of New York Graduate Center. He is the author, along with Stuart Taylor, of The Campus Rape Frenzy: The Attack on Due Process at America’s Universities.

How Badly Do the Democrats Want Catherine Lhamon Back in Power?