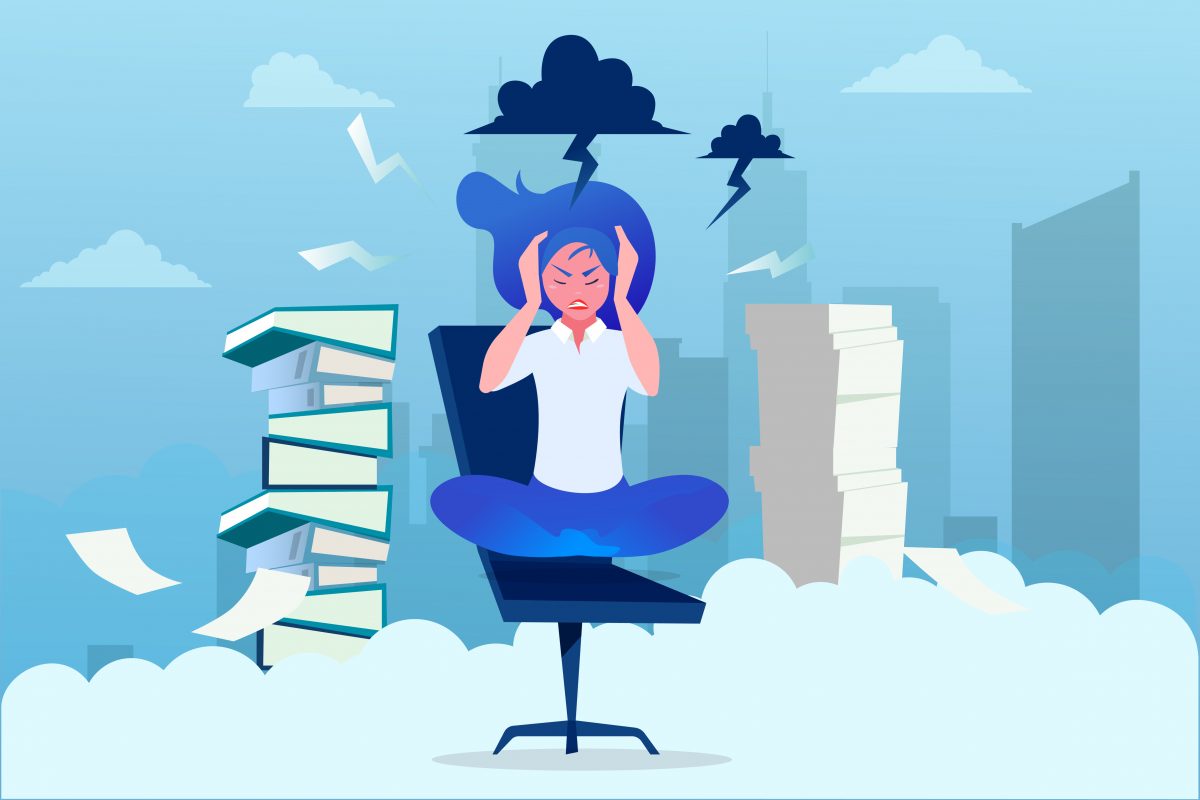 Students have had to make many sacrifices over the past year, be they financial, academic, or personal. The sudden changes and conflicting campus policies have taken a significant toll on their well-being and mental health. After a lifetime of in-class learning alongside their peers, colleges pushed them off-campus and into de facto isolation via Zoom.

After six months, the effects became clear: students were stressed and anxious, struggling to adapt to new circumstances. Those were the results of one study published by the Journal of Medical Internet Research (JMIR) of about 2,000 college students. “Zoom fatigue” became a common feeling as students spent even more time in front of a computer screen.

In the first months of the pandemic, professors were quick to be understanding. Deadlines were delayed and college officials talked about the importance of mental health; many colleges told their students that they have “continued to invest in our mental health and counseling programs.”

However, after three semesters, students feel as if the mental health rhetoric was all for show. The short-term changes did not become long-term policy. Since spring 2020, little more has been done to help struggling students. And students feel unsupported, left to fend for themselves.

An April survey found that 87 percent of professors believe that they are witnessing a severe decline in student mental health during the pandemic, showing that professors are aware of this worsening issue. But many of them lack the mental health training to help students, and colleges didn’t anticipate a long pandemic that would require long-term changes.

On a practical level, college officials need to streamline communication so students 1) know what’s expected of them and 2) can give feedback that helps professors, provosts, and presidents make necessary changes.

Lauren Rosen, a senior at Hunter College in New York City who studies sociology, describes feeling close to abandoned by her professors. A year on, deadline extensions are no longer given, and the same amount of work and effort is expected as if students were back in dorms and on campus. With limited dorms opening up and classes still primarily online, the majority of students are getting a degree from home.

The return home forced students to adjust to more than online classes. “It was really difficult to focus on school when I was back home and living with my family again,” Rosen said. “It felt weird to lose all of the freedom that my college campus granted me.” Rosen isn’t alone in that feeling.

Many students who participated in the JMIR study had similar troubles. “A vast majority of participants (173/195, 89%) indicated difficulty in concentrating on academic work due to various sources of distraction,” such as being interrupted by their family members or being distracted by Netflix or their phone, the study noted.

One way Rosen found some normality was by getting away from her computer. She said a sense of self is lost from spending most of her day staring at a screen. “Walking genuinely saved me during this time,” Rosen said. It helped “just being outside and remembering that I can exist outside of my computer screen.”

When they can’t walk away, students have taken to social media to air grievances. Bella Zamora, a junior studying public health at the University of Miami, posted a TikTok criticizing her school’s use of “Wellness Wednesdays” as students have said, “they are hanging on by a thread due to the pandemic.” It went viral and gained 1.2 million views. (Wellness Wednesdays are free days colleges added so students can have a break from coursework and recover without the risk of spreading COVID-19 as a spring break would present.) 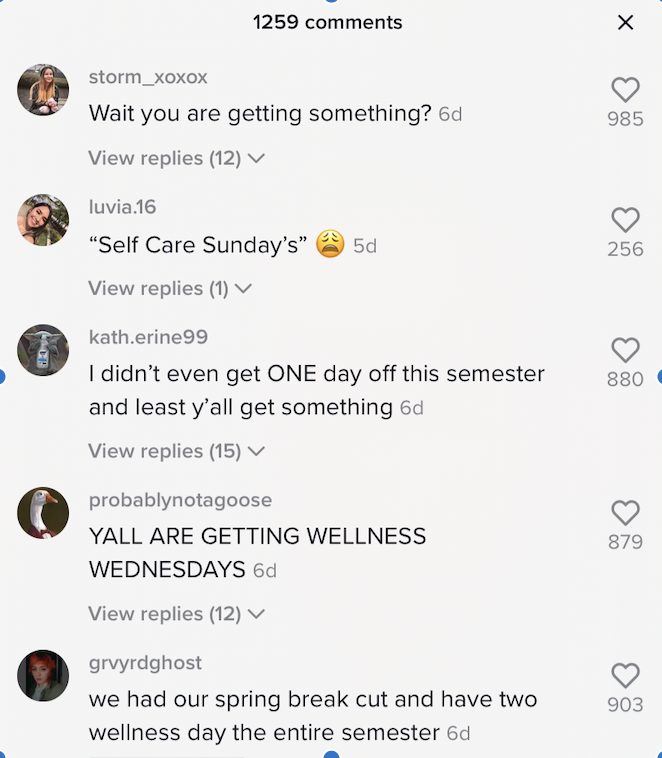 However, the comments on her TikTok revealed that Miami isn’t the only school where students are upset. Other students said they did not have Wellness Wednesdays at all. Instead, they lost spring break entirely. New research from the College Crisis Initiative at Davidson College reports that about 60 percent of colleges have canceled spring break this year.

Zabora said she knew her school did not mean any ill intent when they added mental wellness days for their students, but their delivery was botched. It had to do more because schools were over-assigning work, as they were assuming students would have more time. After all, online classes didn’t require a commute. Yet students have not gained extra time—only extra work in their view.

The scramble to finish assignments has meant that wellness days can’t be used as recovery days. To help herself cope, Zamora sets timers to give herself breaks every half-hour when doing her work. To avoid overwhelming students, she’d like to see campus officials grant students more days off.

This disconnect in coursework may derive from miscommunication between professors and students. Professors may believe that they are accommodating their students and not overburdening them with extra assignments, but the same amount of work has now become taxing for students. Other professors fear a lack of participation due to not being in-person, leading to extra assignments to prove that they are paying attention to the lecture.

The pandemic continues, but short-term assistance to students has not developed into long-term resources.

Betsy Barre, executive director at Wake Forest University’s Center for the Advancement of Teaching, explained how coursework problems might be coming from professors and students alike—poor assignment instructions, students overworking themselves, and miscommunication are contributing to burnout and “the workload dilemma.”

Beyond classwork, some students have also struggled with who they are. “This pandemic gave me a bit of an identity crisis. Everything just kind of stopped, and the entire world was unsure of what was going to happen next,” said Kelly, a recent graduate who studied nutrition and food science and wished to stay pseudonymous. Before the pandemic, she wasn’t anxious but now found herself in therapy to cope with her anxiety and rushed to apply for a graduate program that she was not fully invested in.

Within a month, she withdrew from her classes and wasn’t sure what to do next. Taking away the in-person aspect of school (and life in general) had created a fear of stagnation which manifested into impulsive decision-making.

While many students can relate to Kelly’s experience, she sees her struggles in other students, as she now works for her alma mater’s athletics department. Working in athletics, Kelly has realized the impact that sports have on students; for some, it’s why they’re attending college. When the NCAA canceled games, athletics officials knew they had to motivate their students differently.

In-person practices became bi-weekly Zoom meetings that were interactive to help students destress (they were also offered resources for virtual mental health counseling). “We would have students join in on games such as scavenger hunts, where they were timed to grab random objects in their house or other activities that allowed them to get to know their fellow teammates since being able to see each other daily was taken away from them,” Kelly said.

Zoom meetings became something light-hearted and gave students something to look forward to.

The pandemic continues, but short-term assistance to students has not developed into long-term resources. Some colleges have learned and improved their mental health offerings, however.

The University of Florida has made excellent strides by creating programs to improve student well-being through programs like Good Night Gator and Resilient Gator. The Good Night Gator program was created for students with poor sleep habits (84 percent of participants in a JMIR study have experienced trouble sleeping) to coach them into a better routine. The Resilient Gator program was implemented for mentally exhausted students and aims to build resiliency as they continue in their studies. Targeted initiatives like these help students and show that the administrators understand the difficulties of pursuing a degree during a pandemic.

Universities could, for example, be more lenient with deadlines and keep—not cancel—academic breaks. They could also reach out to students to ensure everyone taking classes is aware of the mental health resources that are available. The end of the pandemic is almost near—it is important that colleges don’t get complacent as normality returns.

Tahra Jirari is a communications associate at the Center for Growth and Opportunity where she helps promote the CGO brand. In her free time she enjoys reading, writing and staying active.

The Pandemic May Be Ending, But Student Anxiety Isn’t