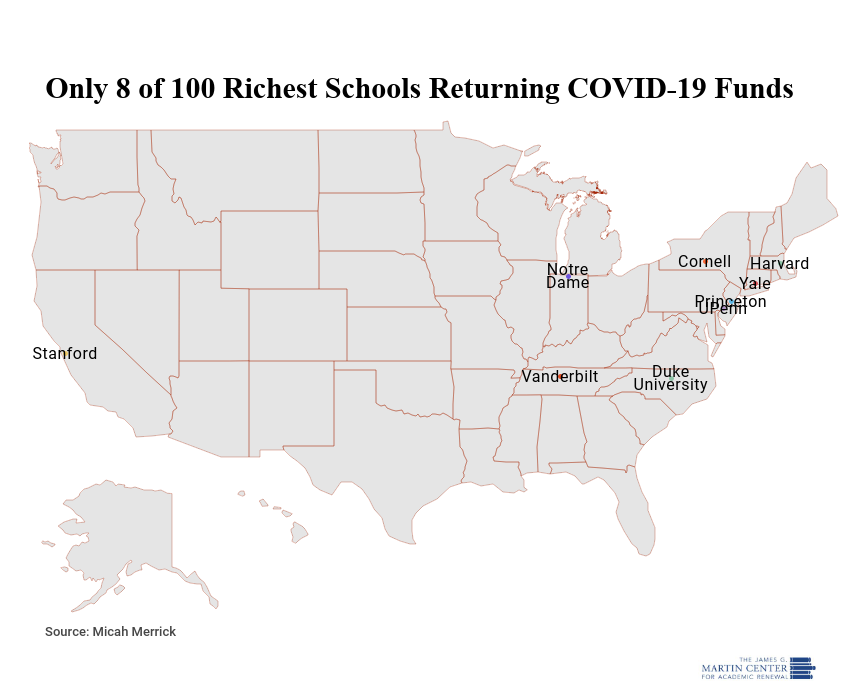 Most of the wealthiest universities in the country have accepted money from the CARES Act, meant to help university students weather the economic consequences of COVID-19 and state shut-downs. The money is part of the Higher Education Emergency Relief Fund.

Education reformer Micah Merrick has been tracking CARES Act money that was allocated to universities directly (excluding money for student scholarships). Of the 100 wealthiest universities in the country, 98 were originally allocated federal bailout money. Only the Rockefeller University and the Kansas University endowments were left out of the original CARES Act largesse.

The largest allocation is more than $86 million, which will go to the University of Texas system. UNC-Chapel Hill will receive more than $8.6 million.

But public pressure persuaded some universities to either refund the money to the government or give it directly to students. Harvard, with an endowment worth more than $39 billion in 2019, was allocated more than $4 million from the CARES Act. But on April 22, Harvard announced that it would not accept federal funds. Harvard also stated that it did not “apply for, request, receive, or access” the funding at any point.

Merrick’s full documentation of CARES Act funds for universities can be found here.

Beauty and Wisdom: Renew the Culture by Restoring the Liberal Arts

It’s Not About ‘Politics’—The Brouhaha over Nikole Hannah-Jones