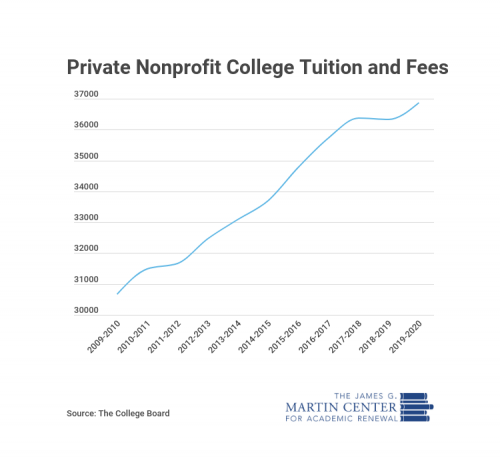 Private colleges that compete with public schools are scrambling to find a way to keep attracting students. To do so, freezing or lowering tuition rates have grown in popularity to bring in cost-conscious young people. Colleges such as St John’s in Maryland and New Mexico, Wells College in New York, and Utica College in New York have made major budget cuts to lower their tuition.

Tuition freezes keep tuition at a plateau for a set number of years. Expenses for room and board, though, can still increase. When a private school instead opts for a tuition cut, such as Wells College, the one-time cuts are usually more dramatic: Tuition can fall by 20 percent to 50 percent. Students rarely paid the full advertised price (the sticker price), so by cutting tuition, students and their parents don’t experience such “sticker shock.”

Cuts don’t always make college more affordable, though: financial aid is often cut simultaneously. It can still be difficult for lower- and middle-income students to afford a private school. The initial publicity of cutting tuition rates can boost enrollment because a school looks cheaper. When the University of the Cumberlands in Kentucky announced a 57 percent tuition cut for the 2019-2020 school year, it dropped the small Baptist university’s advertised tuition from $23,000 to just $9,875 per year.

The tuition cut approach is not yet dominant. Between 2006 and 2017, the average private college increased its tuition by 29 percent, according to the College Board.

When they happen, though, tuition cuts can hide other costs. Albright College in Pennsylvania announced a 45 percent tuition cut starting in 2019, dropping tuition from $44,206 to $24,500. Although they cut tuition, Albright stated that “they increased the room, board, and student services fee for all students, thus, a number of current students still see an increase in overall cost.” And when Utica lowered their tuition by $14,000 in 2016, president Laura Casamento noted that “nearly three-quarters of our families were telling us that we were too expensive.” The school then attempted to price the tuition slightly more than the price of a public school.

While tuition cuts are becoming popular within private colleges, tuition freezes are happening at public universities.

Some universities increase tuition and fees before freezing it. Ohio State University raised its tuition and fees by 3.3 percent, then froze it for the next four years. The university also increased aid so that “students with high financial need are unaffected by the change,” according to a press release.

Though a tuition cut or freeze might look like a win for students, it’s not always the full story. Students, parents, and the media need to ask whether fees, student services, and financial aid are changing as well. Otherwise, the real cost may not be dropping as much as a college claims it is.