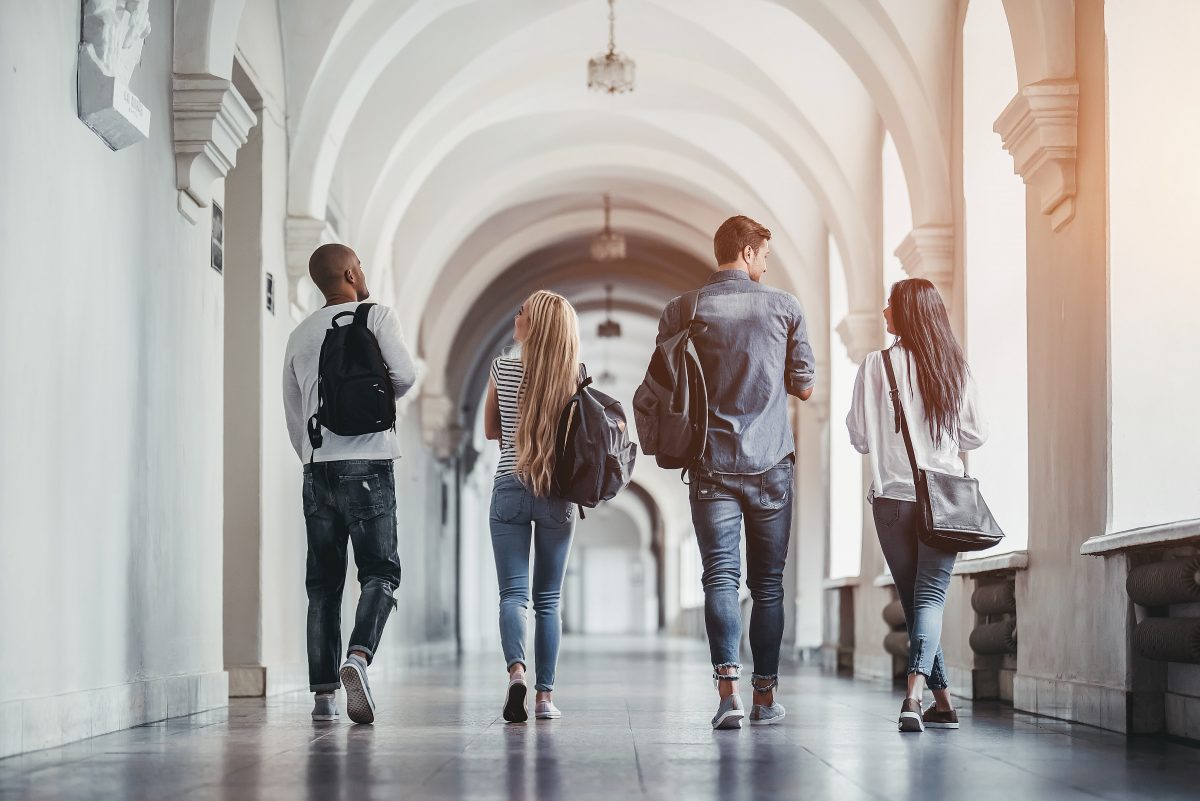 Higher ed gets a lot of criticism from supporters and reformers alike. Sometimes it’s necessary, though, to look at its benefits and note the strengths of colleges.

Steven Brint, distinguished professor of sociology and public policy at the University of California, Riverside, has given the public a reminder of why so many students value a college degree. He is an organizational sociologist who focuses on the sociology of higher education; in his most recent book, Two Cheers for Higher Education (Princeton University Press), he defends the university system against the concerns of the current zeitgeist.

1) Professor Brint, you seem to be cautiously optimistic about American Universities. How did you arrive at this conclusion, or am I wrong?

Yes, I am optimistic. Undoubtedly, American universities are plagued by many problems. The most notable are high cost, the very uneven quality of undergraduate education, and the fraught climate for speech on campus. But the critics who focus exclusively on these problems miss the big picture. Between 1980 and 2015, American universities contributed greatly both to our economy and our society.

They produced a huge number of technological innovations and even new industries such as biotechnology and nanotechnology. They trained hundreds of thousands of scientists, engineers, doctors, lawyers, and businesspeople. Enrollments nearly doubled at both the undergraduate and graduate level, providing mobility opportunities that otherwise would not have existed for many students born into low-income families. This does not sound like an institutional sector that is failing.

2) American universities have been attacked by some as promoting socialism, communism and all kinds of other isms—What is the truth here?

University faculty members tend to be on the liberal side of the political spectrum. There are many reasons why this is true. They tend to be more interested in solving puzzles, conducting research, and teaching than in making money. Other very intelligent people who are more interested in making money tend to gravitate to business, law, medicine, and engineering instead.

Universities are about making new discoveries and that may encourage a kind of elective affinity between professors and progressive social attitudes.

Social movements that advanced the cause of minorities and women have had a continuing influence in academe, perhaps to a greater degree than in some other American institutions. And, yes, there are some radical critics of American society who hold professorial positions. Some of these people are ideologically rigid. But ideologically rigid leftists are a small minority of the total faculty – surely under 5 percent.

The answer to this question depends on what you mean by standards. This has been a golden age of research. University faculty at the top 200 universities have produced much more research over the last few decades than at any other time in American history. They dominate internationally in highly cited research. The level of sophistication in working with data is unmatched. So standards in research are much better than in the past. Something similar would be true of doctoral training and probably also training in the leading professional fields. All of this is heads and shoulders above what we saw in the past.

On the other hand, if the focus is on undergraduate education, the standards are not high enough. There’s been a dramatic drop in study time among undergraduate students since the 1960s. Reading lists have been pared down and grade inflation is rampant. I discuss these problems at length in my book. We will not make progress in undergraduate education unless more professors take seriously the findings of the now large literature on how students learn.

4) There seems to be a plethora of varying “majors” and “minors” that did not exist back in the 60s, 70s, 80s. Will students be able to get employment with these “frivolous” majors and minors?

As I show in Two Cheers, the largest growth in majors and minors has been in business, computer science, and health professions. Are these frivolous? You’d have to look more carefully at business majors on individual campuses. At some schools, business is a weak major. But at other colleges, business is among the most rigorous majors on campus. Only the top undergraduate students at UC Berkeley are able to be accepted into the Haas Business School, for example.

More generally, yes, there are undoubtedly some majors that sound frivolous to me. Recreation and leisure seems at first like a good example. Even so, I would want to look more carefully at what is taught in the required courses for these majors before I would feel comfortable categorizing them as frivolous. Kinesthesiology is certainly a reputable field and courses in that field make up a fair amount of the work in some recreation and leisure majors.

5) Let’s talk learning for learning’s sake—A veteran comes back from 20 years in the military and just wants to learn about the world: What advice would you give him or her?

The answer would have to be highly individualized. I believe in a liberal arts education as the best preparation for seeing the world in its full complexity. But some liberal arts courses are not very good. So it is a matter of finding professors who can make their subjects come alive. I would invest a lot of time in finding out which faculty members were the strongest teachers and I would take as many courses as I could from these master teachers. I was very fortunate to study with some of the greatest teachers in the social sciences in my era.

I would have had an even better experience if I had asked students and teaching assistants about who the best teachers were in the fields I studied. In some cases, the reading material required can carry the course in spite of mediocre performance by the teacher. I had a 17th– and 18th-century English literature course that I found deeply engaging because of the quality of the material we read (Dryden, Donne, Pope, Swift, and others). The relatively dull professor in charge of the course could not reduce the interest of the material.

6) Recently there was some news about Hollywood parents attempting to buy their children entrance into various prestigious universities. How will this impact higher education?

The category of “development admits” has been around for a long time, as Daniel Golden established in his 2006 book, The Price of Admission. The President’s son-in-law Jared Kushner may have been one of these development admits – meaning that he was admitted with lower qualifications because his family was wealthy and could help the college’s development efforts. Public universities tend to police these admissions violations pretty well, but privates have leeway. And a case can be made that a few developmental admits should be acceptable; private colleges, after all, require constant infusions of donations to maintain their excellence.

In the case of the Varsity Blues scandal, parents paid coaches to advocate for their children or found ways to allow their children to cheat on entrance examinations. That’s a more overt violation of rules than the implied quid pro quo found in the case of development admits. Obviously, none of what occurred in the Varsity Blues scandal is acceptable.

7) What were some of the main points that you wanted to make in your book?

Critics say that the United States is falling behind the rest of the world in human capital development because a higher proportion of young people have baccalaureate level degrees in 16 countries. But the European degree is a three-year degree, so the comparison is not entirely apt. In fact, enrollments at baccalaureate, masters, and doctoral levels have increased fairly steadily in the United States, with baccalaureates nearly doubling since 1980 and master’s degrees increasing by 60 percent.

I argue that the success of the American system is due to high levels of investment by federal and private donors and individual families combined with the interplay of three propulsive logics of development.

First, with respect to investment: Compared to the state-dependent systems in most of the world, the U.S. system is distinctive with respect to the variety of revenue sources on which institutions can draw, including federal and state research funds, state subsidies, student tuition, and philanthropic support. By 2015, the federal government alone poured $65 billion into student financial aid and made hundreds of billions available in subsidized loans, and it disbursed more than $30 billion to universities for research and development. Donors provided billions of dollars more. It is hard to overestimate the importance of these multiple and comparatively abundant sources of revenue.

By “logics of development,” I mean guiding ideas joined to institutionalized practices. The first of these logics is the traditional one: the commitment to knowledge discovery and transmission in the disciplines (and at their interstices). I refer to this commitment as academic professionalism. It remains fundamental and provides a necessary autonomy for universities from the priorities of the state and the economy.

During the period I cover (1980-2015), I argue that two movements hit colleges and universities with great force. One was the movement to meet new market demands, and especially to use university research to advance economic development through the inventions of new technologies with commercial potential. The other was to use colleges and universities as instruments of social inclusion, providing opportunities to members of marginalized groups. These movements, in conjunction to the traditional aims of higher education, created a new dynamism because of the strength of partisan commitments to them, backed up by high levels of patronage.

I show that tensions arose at times between these three logics of development, as when faculty entrepreneurs seemed to flout their academic responsibilities in favor of building their enterprises or when the racial or gender backgrounds of candidates seemed to supersede their scholarly achievements as a basis for advancement.

But, I argue, accommodation was the norm. Deans of engineering, for example, found themselves promoting colleagues who made fundamental advances, but also encouraging those who worked with industry and sponsoring programs for minorities and women in engineering. Chairs of sociology departments found that they celebrated scholars who accumulated influence through the citation of their research, while at the same time seeking to diversify their faculty and graduate student bodies and adding new “self-supporting” master’s degree programs in subjects like applied social statistics.

The book also addresses the most serious problems facing American higher education and provides evidence-based recommendations for policy changes to address them. These include the problems of increasing cost, under-performance in undergraduate teaching, the growth of the adjunct labor force, and online competition. I am very much aware of the problems that festered during the period, and I examine them in detail drawing on my own and others’ research.

Michael Shaughnessy is a professor of special education at Eastern New Mexico University.

My Pangs of Conscience