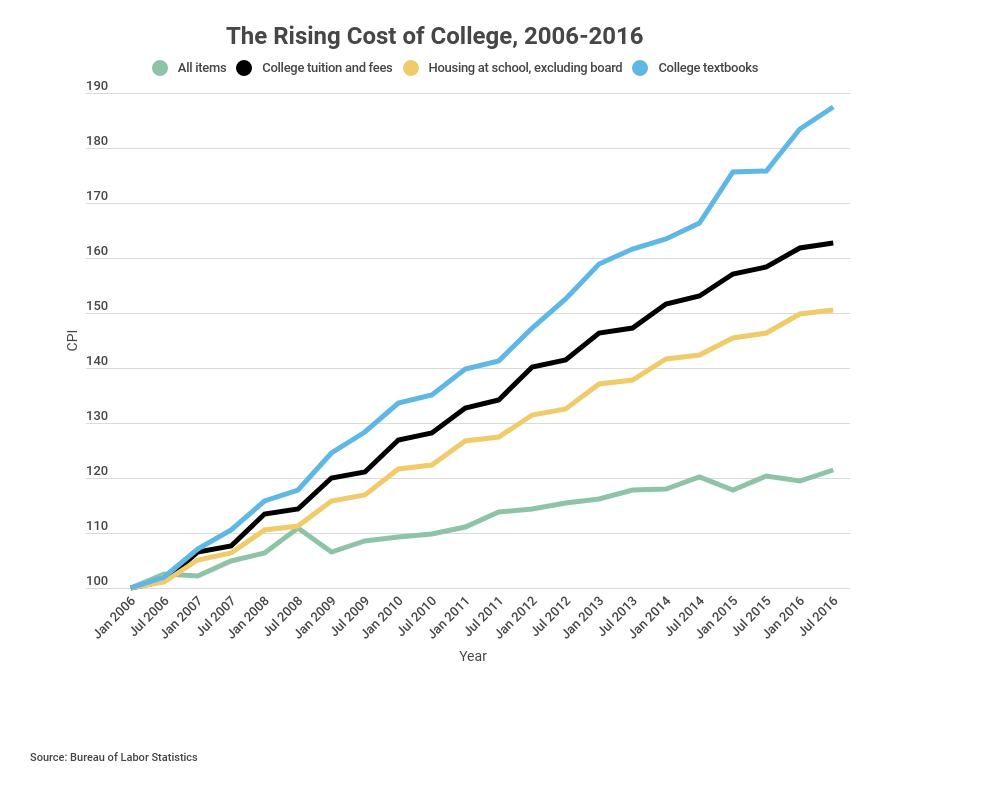 Among presidential candidates, many campaign platforms have a plan to lower college costs. There’s no question that college costs have increased, but textbook prices have seen the sharpest increase—88 percent since 2006, according to the Bureau of Labor Statistics.

Textbook companies work the same as any other large corporation: They strive to maximize their profits. When researchers at the University of Michigan looked into why prices have increased so much, they found that the textbook market has some similarities to the prescription drug market. Both markets rely on third parties (student loans or health insurance companies) to pay for textbooks or drugs for the consumer. When the person paying for something isn’t the person using it, the seller can increase their price without losing a customer.

As journalist Noam Cohen explained in The New York Times:

A final similarity, in the words of R. Preston McAfee, an economics professor at Cal Tech, is that both textbook publishers and drug makers benefit from the problem of “moral hazards” — that is, the doctor who prescribes medication and the professor who requires a textbook don’t have to bear the cost and thus usually don’t think twice about it.

Statehouses have tried to control pricing by legislative action. Since 2007, more than 85 bills in 27 states have been proposed to deal with high textbook prices. And many universities have begun taking matters into their own hands by creating affordable textbook options, such as digital textbooks, renting textbooks, and open textbooks that are free to use. On an individual level, professors have also taken action to keep textbook prices low for students by being more judicious in what books they assign.

If colleges made policies to purchase books directly from publishers, it could help students avoid higher prices in bookstores. They could also create a student marketplace where textbooks could be resold to students who need them. Already, 67 percent of students buy used textbooks, according to a 2017 survey, so the demand exists. But state laws and more action by college officials and professors can’t rein in textbook prices. So long as buying textbooks are a requirement for class, and students have the ability to pay thanks to student loans, prices will remain high.