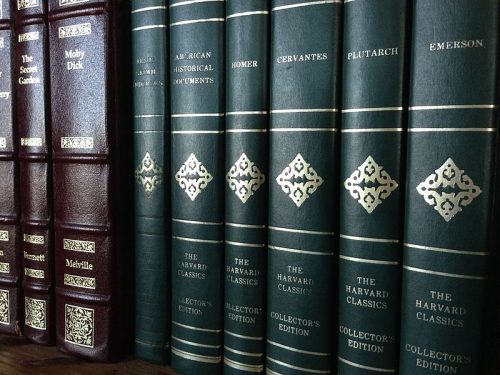 Editor’s Note: This article is adapted from the 1910 introduction to The Harvard Classics by Charles W. Eliot, a long-serving president of Harvard and an advocate of a liberal arts education. In light of its wisdom about the value of the liberal arts and Eliot’s goal in making the classics accessible to every American, the Martin Center is reprinting an abridged form of his essay. This is the first of a Martin Center “History of Higher Ed” series where the Center will republish overlooked writings that shaped American higher education.

My purpose in selecting The Harvard Classics was to provide the literary materials from which a careful and persistent reader might gain a fair view of the progress of man observing, recording, inventing, and imagining from the earliest historical times to the close of the 19th century.

Within the limits of 50 volumes, containing about 22,000 pages, I was to provide the means of obtaining such a knowledge of ancient and modern literature as seems essential to the 20th-century idea of a cultivated man. The best acquisition of a cultivated man is a liberal frame of mind or way of thinking; but there must be added to that possession acquaintance with the prodigious store of recorded discoveries, experiences, and reflections which humanity in its intermittent and irregular progress from barbarism to civilization has acquired and laid up.

From that store I proposed to make such a selection as any intellectually ambitious American family might use to advantage, even if their early opportunities of education had been scanty.

The purpose of The Harvard Classics is, therefore, one very different from that of the many collections in which the editor’s aim has been to select the 100 or the 50 best books in the world; it is nothing less than the purpose to present so ample and characteristic a record of the stream of the world’s thought that the observant reader’s mind shall be enriched, refined, and fertilized by it.

With such objects in view it was essential that the whole series should be in the English language; and this limitation to English necessitated the free use of translations, in spite of the fact that it is impossible to reproduce perfectly in a translation the style and flavor of the original.

The reader of this collection must not imagine that he can find in an English translation of Homer, Dante, Cervantes, or Goethe all the beauty and charm of the original. Nevertheless, translations can yield much genuine cultivation to the student who attends to the substance of the author’s thought, although he knows all the time that he is missing some of the elegance and beauty of the original form. Since it is impossible to give in translation the rhythm and sweetness of poetry—and particularly of lyric poetry—far the larger part of the poetry in The Harvard Classics will be found to be poetry which was written in English.

While with very few exceptions every piece of writing included in the series is complete in itself—that is, is a whole book, narrative, document, essay, or poem–there are many volumes which are made up of numerous short, though complete, works. Thus, three volumes contain an anthology of English poetry comprising specimens of the work of over 200 writers. There is also a volume of memorable prefaces, and another of important American historical documents.

Five volumes are made up of essays, representing several centuries and several nationalities. The principal subjects embraced in the series are history, biography, philosophy, religion, voyages and travels, natural science, government and politics, education, criticism, the drama, epic and lyric poetry, and prose fiction—in short, all the main subdivisions of literature.

The principal literatures represented in the collection are those of Greece, Rome, France, Italy, Spain, England, Scotland, Germany, and the United States; but important contributions have been drawn also from Chinese, Hindu, Hebrew, Arabian, Scandinavian, and Irish sources.

Since the series is intended primarily for American readers, it contains a somewhat disproportionate amount of English and American literature, and of documents and discussions relating to American history and to the development of American social and political ideas.

Nothing has been included in the series which does not possess good literary form; but the collection illustrates the variations of literary form and taste from century to century, the wide separation in time of the recurrent climaxes in the various forms of literary expression in both prose and verse, and the immense widening of the range and scope of both letters and science during the 17th, 18th, and 19th centuries.

The works of living authors were in general excluded, because the verdict of the educated world has not yet been pronounced upon them.

Although a good part of the reading provided in The Harvard Classics may fairly be called interesting, there are also volumes or portions of volumes which make hard reading, even for a practised student. In the literature of other days some of the topics treated are unfamiliar, and, moreover, the state of mind of the authors is apt to be strange to the present generation. The sentiments and opinions these authors express are frequently not acceptable to present-day readers, who have to be often saying to themselves: “This is not true, or not correct, or not in accordance with our beliefs.”

It is, however, precisely this encounter with the mental states of other generations which enlarges the outlook and sympathies of the cultivated man, and persuades him of the upward tendency of the human race.

The Harvard Classics, as a whole, require close attention and a resolute spirit on the part of the reader. Nevertheless large parts of the collection were undoubtedly composed just to give delight, or to show people how to win rational pleasures. Thus, the real values of almost all the tales, dramas, fiction, and poetry in the series are esthetic, not didactic, values. The interested reader ought to gain from them enjoyment and new power to enjoy.

There is no mode of using The Harvard Classics which can be recommended as the best for all readers. Every student who proposes to master the series must choose his own way through it.

Some readers may be inclined to follow the chronological order; but shall they begin with the oldest book and read down through the centuries, or begin with the youngest and read backward? Another method would be to read by subjects, and under each subject chronologically. A good field for this method is the collection of voyages and travels.

There is also merit in the chronological order in reading the documents taken from the sacred books of the world. Still another method is that of comparison or of contrast. The collection gives many opportunities of comparing the views of contemporaneous writers on the same subject, and also of contrasting  the prevailing opinions in different nations or different social states at the same epoch. In government and politics, for example, the collection supplies much material for comparing the opinions of writers nearly contemporary but of different nationality, and for contrasting the different social states at the same epoch in nations not far apart geographically, but distinct as regards their history, traditions, and habits.

The anthology of English poetry is one of the most important parts of the collection, in respect to its function of providing reading competent to impart liberal culture to a devoted reader; but those volumes should not be read in course, but rather by authors, and a little at a time.

The main function of the collection should be to develop and foster in many thousands of people a taste for serious reading of the highest quality.

The poems of John Milton and Robert Burns are given in full; because the works of these two very unlike poets contain social, religious, and governmental teachings of vital concern for modern democracies. Milton was the great poet of civil and religious liberty, Puritanism, and the English Commonwealth, and Burns was the great poet of democracy.

The two together cover the fundamental principles of free government, education, and democratic social structure, and will serve as guides to much good reading on those subjects provided in the collection. The poetry contained in The Harvard Classics from Homer to Tennyson will by itself give any appreciative reader a vivid conception of the permanent, elemental sentiments and passions of mankind, and of the gradually developed ethical means of purifying those sentiments and controlling those passions.

In order to make the best use of The Harvard Classics it will be desirable for the young reader to reread those volumes or passages which he finds most interesting, and to commit to memory many of the pieces of poetry which stir or uplift him. It is a source of exquisite and enduring delight to have one’s mind stored with many melodious expressions of high thoughts and beautiful imagery.

I hope that many readers who are obliged to give eight or ten hours a day to the labors through which they earn their livelihood will use The Harvard Classics, and particularly young men and women whose early education was cut short, and who must therefore reach the standing of a cultivated man or woman through the pleasurable devotion of a few minutes a day through many years to the reading of good literature.

The main function of the collection should be to develop and foster in many thousands of people a taste for serious reading of the highest quality, outside of The Harvard Classics as well as within them.

It remains to describe the manner in which The Harvard Classics have been made up. I had more than once stated in public that in my opinion a five-foot shelf would hold books enough to give in the course of years a good substitute for a liberal education in youth to anyone who would read them with devotion, even if he could spare but 15 minutes a day for reading.

Rather more than a year ago the firm of P. F. Collier & Son proposed that I undertake to make a selection of fifty volumes, containing 400-450 pages each, which would approximately fill my five-foot shelf, and be well adapted to accomplish the educational object I had in mind. I was invited to take the entire responsibility of making the selection, and was to be provided with a competent assistant of my own choice.

Charles W. Eliot was president of Harvard University from 1869-1909.