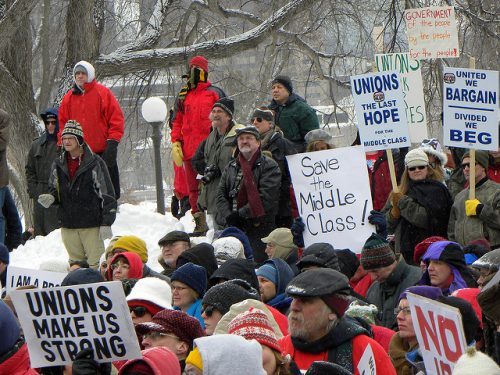 It’s a simple principle, really: In a free society, government cannot force an individual to belong to any group. Instead, each of us chooses with whom we will associate, and under what conditions. What is the point of freedom of association, if not this?

Almost all of us understand and accept this basic tenet of American democracy. We would be outraged if the federal government or a state government required us to join a political party, or forced us to become a member of a particular religion, or authorized those organizations to speak for us against our will. Government shouldn’t have that power, and thankfully it doesn’t—with the glaring exception of forced union representation. Forced union representation is an affront to the freedom of individuals to choose how and with whom they wish to associate. As we enter the mid-21st century, government continues to mandate that its employees accept union representation, whether they want it or not.

I am a professor of political science at St. Cloud State University, one of seven universities in the Minnesota State University System. Since joining the faculty in 1999, I have been forced to accept union representation and have continuously fought for reform.

Many of my union colleagues believe that I’m anti-union. Nothing could be further from the truth. I have strong blue-collar roots, including a long history of union membership in my family. My father was a truck driver for 30 years—a Chicago Teamster no less. My grandfather spent his career in the auto industry; he belonged to the United Automobile Workers. My husband and three generations of his family were members of the steel workers’ union. When I was growing up, most of my relatives belonged to a labor union.

That was fine for them, but it’s not fine for me.

So, what’s my objection? Again, it’s pretty simple: I have the right to choose with whom I associate except for my public employment. That choice was taken from me and other public employees decades ago, for reasons that were questionable then and are unsupportable now. That’s why I’m challenging Minnesota’s authority to appoint a labor union to speak for me as my “exclusive representative.”

I have partnered with The Buckeye Institute to end the forced union representation of faculty members and public universities—and all other public employees—once and for all.

The lawsuit has nothing to do with the merits of labor unions. I want the Supreme Court to recognize that public employees who aren’t union members have the right to associate (or not) with whomever we choose, as well as the right to choose for ourselves who speaks for us.

Last summer, the Supreme Court freed non-union public employees from paying compulsory union dues. In Janus v. AFSCME, the justices concluded that it was unconstitutional to force unwilling public employees to subsidize union collective bargaining activities. The day the decision came down, my labor union, the Inter Faculty Organization (IFO), finally released non-members from being forced to fund the union’s speech. I celebrated that decision.

Unfortunately, the State of Minnesota wouldn’t let me go. State law mandates that the IFO serve as the “exclusive representative” of all faculty members in the Minnesota State System. That means the union continues to represent me, even though I decided not to join it as a member. So, while I don’t have to pay the union, the law still regards it as my “representative.”

The result of this “representation” is a two-tiered system of faculty employment that rewards union employees and punishes non-union employees.

For example, non-union faculty members are barred from serving on all university committees, including search, service, and governance committees. These committees make policy on everything from strategic planning and budgeting to curriculum. Even our Faculty Senate is union-only. These prohibitions severely curtail our participation in our careers, and in the life of our universities generally.

Non-union faculty members also are prohibited from serving on System committees. We have no formal ability to interact with its administrators or participate in its planning or decision-making. Sadly, the System and the IFO define this exclusion broadly, banning non-union faculty members from serving on anything that even remotely resembles a committee, including “task forces” and “working groups.”

These prohibitions also mean that non-union faculty members are not eligible for the extra compensation that can accompany committee work. This compensation takes the form of additional salary or stipends or job duty reassignments.

My rights of free association and free speech should not be subject to the System’s preference for the status quo.

The sum total of this discrimination is that non-union faculty members are denied professional opportunities that their union counterparts take for granted—namely to make academic policies, form relationships with administrators, join professional networks, and gain the experience necessary for professional advancement within higher education.

I don’t blame the IFO for acting on behalf of its members; that’s what unions do. I blame my employer—the State of Minnesota—for defending a law that compels me to accept the IFO as my representative, even when I don’t want that, and anoints the IFO to be my voice, even though it negotiates employment terms that harm my career.

My opposition to forced union representation is now entering its third decade. I’ve lost track of the number of system chancellors, general counsels, university presidents, and elected officials that I have reached out to in an effort to explain why the IFO should not speak for me.

My disagreements with the IFO are wide in scope and fundamental in nature. I categorically reject the IFO’s definition of “shared governance” because it’s not shared with me. I disagree with all of the contractual provisions that the IFO and my employer have negotiated against my interests. I disagree with its professional priorities for faculty members and its treatment of non-union faculty members. I oppose its political positions and its candidate endorsements. I’m not even a member of the IFO—but Minnesota doesn’t care. State law inextricably binds me to the union; my 20 years of objections do not matter.

It’s time for the State of Minnesota to end this unconstitutional charade. My rights of free association and free speech should not be subject to the System’s preference for the status quo, or to the inertia of the Minnesota legislature.

I am grateful to The Buckeye Institute and its brilliant legal team for standing with me and making it possible to take this fight to the Supreme Court. We earnestly hope that the High Court will accept our pending petition and grant us full review.

Regardless, we will continue to fight for the rights of non-union public employees in an effort to fulfill the Constitution’s promise of free association and free speech for all. No exceptions!