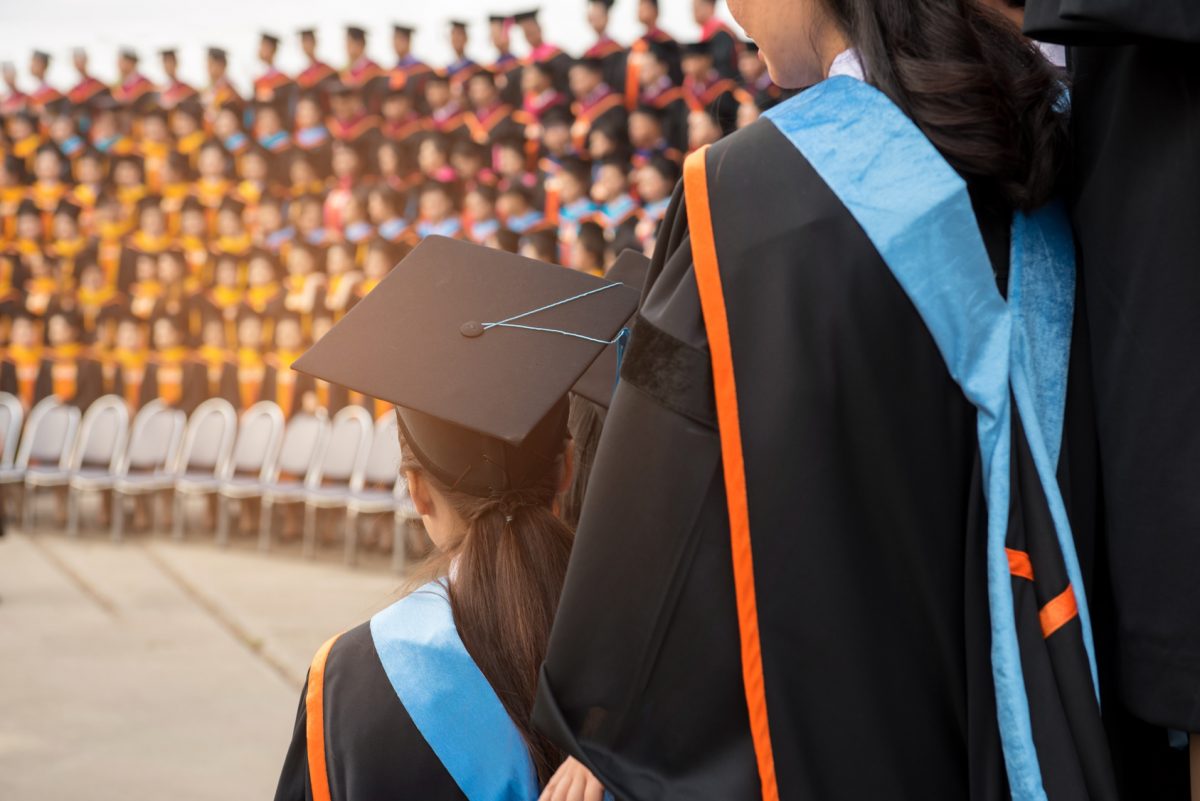 An important voice is missing in today’s colleges and universities: that of their alumni. Their absence does a disservice to both students and the general public because, in many ways, alumni are the missing link that connects universities to the larger communities they serve. After all, alumni work in the “real world” after graduation and are usually more in-tune with the public than those who make a career in academia.

In addition, alumni serve as a vehicle of transparency and accountability in university governance. Without that oversight, university administrators are free to make important decisions—and hide unseemly ones—with few consequences. Such free rein can lead to a fraught system of governance. University leaders without proper oversight may enforce ideological agendas at odds with higher education’s purpose.

Fortunately, the lack of alumni influence might be changing at two universities. In recent months, alumni groups at George Washington University (GW) in Washington, D.C. and the University of Texas at Austin (UT) are refusing to be ignored. But in both cases, university officials appear reluctant to share their decision-making powers with other stakeholders.

An Unexpected Turn of Events at GW

The alumni group at GW is the most recent to hit the news. Just last month, the university completely cut ties with its alumni association, which was established in 1960 and had been its main alumni group since then. According to the school’s independent newspaper, The Hatchet, the recent drama between the alumni association and the university was preceded by a series of disagreements over power-sharing and financial control.

The story starts with the election of the association’s former president, Venessa Perry, in June 2017. In her capacity as president, Perry had two main goals for the alumni association:

However, during board discussions about the possibility of integration, some members expressed concern that the association would lose too much of its independence. The general understanding appeared to be that, if the board chose to go forward with the process, the conditions of the partnership would need to be discussed and agreed upon. Nevertheless, according to then-board treasurer Martin Baum, that discussion never took place.

Instead, in May 2018, Perry announced to GW’s Board of Trustees that the alumni association would integrate with the university July 1. She joked that the move for integration had made her “unpopular,” but said it was “necessary for growth.”

Soon after, members of the alumni association voted Perry off its board. However, Baum told the Martin Center that the real point of contention was the fact that Perry chose to officially carry the process forward without the backing of the board and without discussing the terms of integration with the board. This unitary action concerned board members who wanted to ensure they were acting on behalf of their alumni.

After Perry’s dismissal, Baum became interim president. As president, he decided to continue conversations about integrating the association with the university, but this time he sought the input of alumni on and off the board.

Additionally, the board hired a lawyer to compose a proposal to present to the university. That proposal contained terms and conditions—in Baum’s words, “safeguards”—to ensure that the association maintained a certain level of independence. In particular, there were two key safeguards.

One was the association’s “gift agreement” policy. The proposed policy would allow donors to choose where their funds would be directed—instead of leaving that decision up to the university. The association also requested that it be permitted to choose who would fill a few of the seats on the alumni board once it merged with the university. Those requests seem reasonable, especially since the association was already willing to relinquish a great deal of its independence.

After composing its terms and conditions, the association turned in a seven-page proposal to the university’s Office of Alumni Affairs in August. Baum said that he received a positive verbal response from the university and awaited its official response, which he expected would kick off negotiations between the two entities.

However, negotiations never took place. Matthew Manfra, senior associate vice president for alumni relations & annual giving of the office, and the association’s key contact during integration discussions came to Baum’s office a month later and handed him an envelope stating that the university was cutting all ties with the alumni association. Instead, the university would create its own internal alumni group.

Baum said he felt “blindsided” by the university and wrote letters to several officials, including university president Thomas LeBlanc, to ask why GW made such a sudden and dramatic decision.

He received no explanation.

It appears that the association’s willingness to give up some of its power was not enough for the university—which seems to operate on an “all or nothing” basis when it comes to control. If true, such action is nothing less than a power grab.

On the other hand, if the university does not fear limitations on its power, then it is unclear why it so abruptly ended a relationship with an alumni group that had been serving alumni for almost 60 years—and with which it had been discussing the possibility of integration. Since the university has ignored multiple inquiries from the Martin Center, one can only speculate that the university preferred to remain a closed system—away from any sunlight.

Whatever the case may be, Baum and his alumni association aren’t going anywhere. Going forward, the group will continue to serve alumni—only without the right to claim any formal relationship with the university (no use of the university mascot, email domain, etc.). It also has to change its name from the George Washington University Alumni Association to the “Independent Alumni Association of George Washington University.”

Reflecting on the turn of events, Baum told the Martin Center:

[Integrating with the university] would have been a little bit of a trade off—we would maybe lose a little bit of our independence—but at least we would have a seat at the table and be very involved with the [university’s] strategic direction. And now, we don’t have a direct seat at the table, but we’re totally unburdened to communicate [with] and represent alums, and try to influence what the university decides going forward.

Fortunately, Baum seems to recognize the value of being an independent voice. Hopefully, this next chapter of the group’s history will be that of holding the administration’s “feet to the fire” and serving as a faithful mediator between the university and its graduates. Ironically, the university’s distasteful actions might have been the wake-up call alumni needed to take a more critical look at GW’s governance practices.

UT Forced into the Sunlight

Questionable governance practices, however, are not limited to GW: the University of Texas at Austin (UT) appears to be heading down a similar path. As a consequence, the institution has been mired in mismanagement scandals and ubiquitous political bias.

For example, former university president William Powers lost his job in 2015 after it was discovered that he granted special admissions privileges to important legislators and donors. Nonetheless, Powers still holds a prestigious position in UT’s law school. In addition, current president Gregory Fenves retained and rewarded a high-ranking employee who was implicated in the scandal.

Furthermore, since Fenves took the reins, the university has increasingly embraced the progressive agenda. Examples of the politicization of UT are seemingly endless. One stark example of the university’s casual acceptance of mob rule was when a group of activist students attacked a peaceful demonstration for then-Supreme Court nominee Brett Kavanaugh. The university was slow to comment and never directly condemned the mob’s violent conduct. Not surprisingly, UT has a red-light free speech rating from the Foundation for Individual Rights in Education—meaning it has “at least one policy that both clearly and substantially restricts freedom of speech.”

Other examples include the uptick of “grievance studies” (such as new programs that focus on race, gender, and inequality) and other social justice programs (such as MasculinUT which encourages male students to wear makeup and dresses).

To make matters worse, UT’s official alumni association appears to be an extension of the university. According to Saurabh Sharma, the chairman of UT’s Young Conservatives of Texas chapter,

Texas Exes [the alumni association] is the main portal through which alumni get information on what’s going on at the school, and they are remarkably controversy-shy. They don’t want to bring anything that could be perceived as negative attention to UT and so they hide a lot of stories that really matter.

And Mark Pulliam, a retired attorney and an alumnus of UT’s law school, said that even the media fail to keep the university accountable: “The media, the newspapers, are very liberal and pro-UT. Everything either doesn’t get covered or gets covered with a particular spin.”

University officials prefer to carry forth their visions unencumbered by checks and balances.

To call attention to the questionable governance practices and pervasive liberal bent at his alma mater, Pulliam started an alternative alumni group on Facebook called Stop the Insanity at UT—which gained 1,000 followers in less than a month. Soon after, the group moved into what Pulliam called the “action phase,” where the group’s followers reached out to the state governor and other elected officials to protest what was happening at UT. The group’s rallying cry is: “don’t California-ize UT.”

If the events at UT Austin and George Washington illustrate anything, it’s that university officials prefer to carry forth their visions unencumbered by checks and balances. That’s why independent entities with an invested interest in higher education’s future—such as alumni groups—are vitally needed to ensure that all colleges and universities remain faithful to the larger communities they serve.

More alumni should emulate GW’s and UT’s independent alumni groups by refusing to be silenced and taking direct action to ensure their alma maters stay on course.

Otherwise, if those at the helm are left to their own devices, they run the risk of capsizing the entire higher education enterprise.