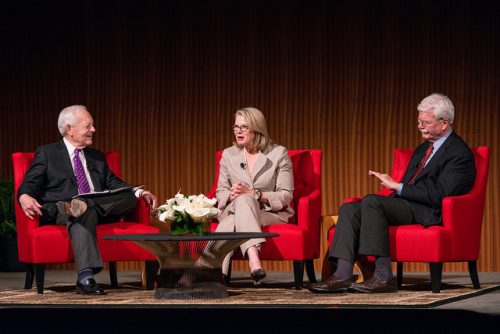 Although Margaret Spellings will be leaving her post as president of the University of North Carolina system prematurely on January 15, she started several programs in her three years on the job. One of those programs is NC Promise, which went into effect this fall semester.

NC Promise lowers the cost of tuition to $500 per semester at Elizabeth City State University, Western Carolina University, and the University of North Carolina at Pembroke. NC Promise—along with the system’s detailed strategic plan—will likely be among the accomplishments for which Spellings will be remembered.

One of her last efforts as system president has been to raise awareness of NC Promise, as well as the Fixed Tuition Program, through the “We Promise” campaign.

The Martin Center sat down with President Spellings to discuss We Promise and NC Promise, and her thoughts on the future of higher education—in North Carolina and nationally.

Part of; that, coupled with accountability and transparency and data—where we’re super clear about what we would want to have happened—closing the gaps between our low-income students and disadvantaged students in terms of access and completion and all those sorts of things. Access, affordability, and accountability I would say are my three pillars.

The We Promise campaign was something that the legislature asked us to do and something, in my humble opinion, that we should do more of: and that is, market our offerings and what a great deal NC Promise is for students.

Most of the Martin Center’s readers are familiar with We Promise and NC Promise. Is there evidence that these initiatives have been successful in encouraging students to go to college who otherwise wouldn’t go?

Freshman enrollments are also up significantly, in the double digits and more. There have been big increases of transfer students and enrollments. I met a student at Western a few weeks ago, who wanted to be an EMT, an EMS type of career, and he didn’t really think it was possible for him. Now he’s at Western pursuing that as a result of NC Promise. There’s a lot of personal stories. Affordability—even as affordable as we are—continues to be an issue. As I say sometimes in my speeches, $500 is still a lot of money if you don’t have $500 in your checking account or any savings.

What are the anticipated costs of NC Promise to North Carolina taxpayers?

About $51-$52 million—that’s what the legislature has appropriated to “buy down” the cost of tuition to the $500 level. That number is likely to go up given the fact that more people are finding out about NC Promise. This is why we launched the campaign because we want people to know that college is available, close to them, and affordable.

Confidence in higher education is low as these polls show, and you’ve certainly seen your share of turbulence. Higher ed is obviously going through some changes; what do you see going on in the future?

There is a lot in that question, the first is: people do believe in higher education and they do believe that it’s the key to a successful and prosperous life. We’ve got some polling data that we’ll release fairly soon from Gallup that says that people—a high percentage, somewhere in the 80s—think that higher education is key to a better life; they buy into that proposition. But higher education is under stress, pressure, and change—like pretty much every area of American life. People want it, yes affordably, but they also want it conveniently for themselves because we’re in a 24/7 world and the non-traditional student is becoming the traditional student.

These are students who have families, children, jobs—we’re all a nation of lifelong learners now. Perhaps you’ve been involved in manufacturing, and now you want to come in and retool your career and become more tech-savvy. All of those things are changing and that means that higher education has to be more adaptable to people. Maybe when you went to college, you had to go Monday through Thursday between 10 and 2 p.m.—and take it or leave it. Now, we have to be more available through technology and in many other ways. So higher ed, like everything, is under pressure.

Well, we’re kind of talking about several issues. One is: are we adapting to the needs of people who need and want to pursue higher education? That’s a set of issues. The second set of issues is: do people see their own values reflected in this institution, in terms of orthodoxy? I think we need to do a better job of heartening that balance—I don’t think we have enough of it; we need to work on it. We talk about diversity: diversity of thought, diversity of viewpoint, and civil discourse. People need to see those kinds of things in the institutions that taxpayers support.

And what advice do you have for your successor?

Well, I’m giving my successor advice in real-time—and that is: we have a strong strategic plan that was developed through a process that has a lot of buy-in through the institutions, and in their own strategic plan; it’s simple, it’s coherent, it’s measurable, it’s laying a foundation for charting our progress over time.

Is there anything else you would like to tell the Martin Center readers?

Thanks for paying attention to higher education. As chairman Harry Smith says, it’s the state’s number one asset—and I agree with that. It’s what has distinguished North Carolina from many other states, and it’s this strong and mighty unified platform that has been heavily invested in by the legislature and by taxpayers. And it’s paid huge dividends for the state in terms of research, economic growth, quality of life, cultural richness, and on and on and on.