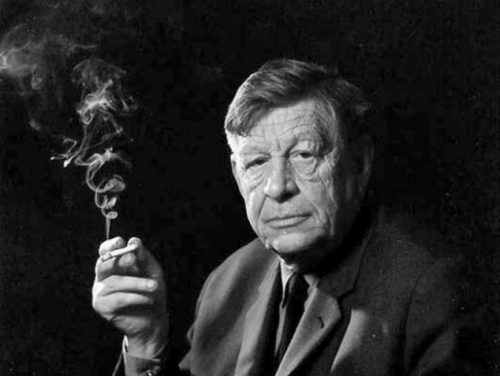 We’re used to hearing that American college students don’t like reading and avoid tough courses where they have to. But a new course at the University of Oklahoma (OU) proves that many students are eager for a demanding course.

In the fall of 1941, as a visiting faculty member at the University of Michigan, the poet W.H. Auden offered an undergraduate course of staggering intellectual scope, entitled “Fate and the Individual in European Literature.” We know little about the origins or trajectory of this remarkable course: how it was conceived, how it was taught, how it was received.

It is mentioned in passing in some biographical accounts of Auden’s life. There are a few testimonials from students enrolled in the course (among whom was one Kenneth Millar, better known by his detective-fiction pseudonym Ross McDonald), but it has otherwise passed down into the memory hole—until recently.

Seventy-one years after the course was taught, a faded, marked-up copy of Auden’s original one-page syllabus was unearthed in Michigan’s archives by the literary scholar Alan Jacobs. He then posted on the internet for all to see. Soon it was circulating widely, eliciting a surprising amount of commentary.

Scholars were excited by the discovery, for it provided them with a list of texts that Auden himself, one of the greatest poets and critics of the twentieth century, considered central to the Western intellectual tradition. In a way, it was like a guided tour of the intellectual furniture of a great poet’s mind.

The course was enormous. It was as if Auden had put together an idiosyncratic and mainly literary version of a Great Books curriculum and compressed it into a single semester.

Beginning with the ancient Greek tragedians Aeschylus and Sophocles, the course covered the Roman poet Horace, then St. Augustine’s Confessions, Dante’s Divine Comedy, a bouquet of Shakespeare plays, Pascal, Racine, Blake, Goethe, Baudelaire, Dostoevsky, Melville, Kafka, Eliot, and other certifiable greats, tossed in some then-classic scholarship about culture (including Ruth Benedict and C.S. Lewis), then washed it all down with the bubbly delights of nine opera libretti.

All in a single semester. Who could digest such a feast?

As the New York Daily News headline exclaimed, “W. H. Auden’s Syllabus Will Make Your College Courses Look Like a Piece of Cake.” Not the most elegant way to put it, but the point was made. Auden presented his students at an American public university with nearly six thousand pages of required reading for a one-semester, two-credit-hour class.

The responses to Auden’s course were a bit of a Rorschach test.

Some thought its high demands were a commentary on the lower standards to which education has devolved in our time. Others shook their heads in disbelief, dismissing the idea that Auden could possibly have imagined that students were actually doing the readings. But both sides seemed to agree that no teacher in his right mind would attempt something similar today.

Well, here at the University of Oklahoma, people have a pioneering spirit. They get their backs up when they hear that something can’t be done. After joining the OU faculty in the fall of 2013, I caught that spirit. While working with some of the most interesting and dedicated scholar-teachers I’d ever met, I thought about the Auden course and wondered if one might teach it, or at least something patterned after it.

I wasn’t sure I had the chops to do it. Yes, I’d had a Great Books education as an undergrad at St. John’s College, but that was a long time ago. My professional field was American history. What business did I have teaching Dante? I discovered two brave colleagues, David Anderson of the English Department and Kyle Harper of the Classics Department (and provost of the university), who were just as partially prepared as I but excited at the idea of team-teaching the course together. We found that there was complementarity in our respective areas of ignorance and a spirit of adventure that redeemed it all.

The two-semester course that we developed tries to capture the same sweep, intellectual richness, and mingling of seriousness and delight that Auden’s syllabus embodied. To accomplish this, we added a few things to the master’s own list and removed others. For some reason, just to pick one example, Auden didn’t include any epics. We have presumed to improve on him by including the Odyssey, Aeneid, Beowulf, and Paradise Lost, texts that (with Dante) form the backbone of the course’s first semester.

The fall semester runs from Homer and Greek tragedy to the Renaissance. In the spring, we focus on modernity, beginning in the Enlightenment and ending in the mid-twentieth century. Throughout, we wrestle with the big questions conjured up by Auden’s title: what is the role of fate or destiny or providence in human affairs? What is the role of God or the gods? What is the meaning and extent of human freedom? What is the value of an individual person and what constitutes a meaningful life? How should we relate to those around us and to those in authority?

After creating the syllabus, we marched out to recruit students to take our daunting course.

Colleagues were skeptical that such students could be found, but as soon as the course opened for registration, it filled up. The same thing happened in the second semester, and again in the first semester of the current academic year. Each semester we have raised the ceiling for course enrollment; every semester we’ve had to turn away students. Kyle Harper’s bold promise to the students turned out to be an irresistible recruiting slogan: “This is the hardest course you’ll ever take.”

We have broken every rule of the postmodern academy, creating a highly demanding sequence of classic works, setting high expectations, and eschewing the grayness of theory and the reductionism of identity politics in favor of an intense engagement with the texts themselves. We insist upon literature as a distinctive form of knowledge and upon tradition as a source of creativity and insight.

We offer these books to students as a part of their legacy, as something that by right belongs to them, no matter who they are or what they look like or where they come from. And they respond with enthusiasm. Those who are prepared to give up on the millennial generation should come to our class. Their hope will be renewed, their defeatism defeated.

Our course is different from a typical Great Books course in a number of ways.

First and foremost, it is different because Auden the poet is a constant presence. We look at the works, not only as freestanding entities but also to understand them as they are filtered through Auden’s own sensibility. When we read the Aeneid, we also read and discuss Auden’s poem “Secondary Epic,” which represents Auden’s witty and penetrating response to Virgil, or we hear David Anderson’s expert unpacking of Auden’s “Shield of Achilles,” a pointed contrast to the Shield of Aeneas.

When we study Don Giovanni, we also read Auden’s observations about the relationship between composer and librettist. When we read Augustine’s Confessions, we also read Auden’s “As I Walked Out One Evening,” with its call to “love your crooked neighbour with your crooked heart.” Almost every class and every reading present similar opportunities. Sometimes we just bring in an Auden poem on the spur of the moment and pass it out for an impromptu discussion before beginning our lectures. It works.

Those who are prepared to give up on the millennial generation should come to our class. Their hope will be renewed, their defeatism defeated.

This Audenization of the Great Books serves a purpose. Students begin to see how the great texts not only are monuments of unchanging intellect and living things in conversation with one another, but that such texts can be the food and drink sustaining the life of a master artist. They can take the books as their own food and drink too and can see from him—and hopefully from their teachers too—how the life of the mind can be lived, how a life of intense creativity and searching moral imagination rooted in this rich inheritance can be theirs for the asking.

And we’ve done it all with a great sense of fun. We end the course with a party at my house on the final day of classes. There is conversation into the night and an overwhelming sense of shared accomplishment.

We present the students that evening with celebratory t-shirts featuring a design one of them has suggested. During our first year, students Albert Tran and Robert Thomas took an engraving depicting Aeneas’s departure from Troy, with his father Anchises on his back—and in Anchises’ place, photoshopped a giant pile of books.

“I Survived!” the shirt says. But it’s the pile of books that you notice, along with Aeneas’s famous words, taken from a particularly harrowing moment of the Aeneid, “A joy it will be one day, perhaps, to remember even this.”

Not a bad image for what the course does.

A Radical Pseudo-historian Meets His Match