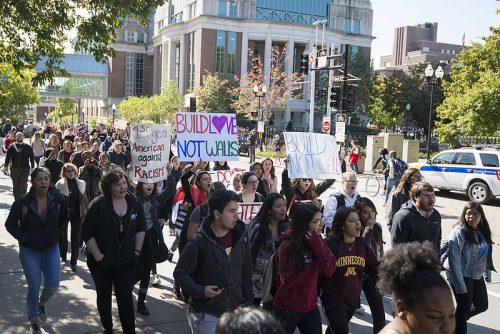 One of the provisions ordered the University of North Carolina system Board of Governors to produce an annual report on two major categories of intellectual freedom: free speech and institutional neutrality. This report is due on September 1.

The free speech provisions of the law protect students exercising their First Amendment rights and require institutions to punish anyone who infringes upon these rights. This is fundamental to the purpose of a university, permitting the free exchange of ideas that is a prerequisite for the search for truth. The law protects students and guest speakers alike from being disrupted or silenced. It also states that higher education institutions should aspire to “institutional neutrality,” which means they “may not take action, as an institution, on the public policy controversies of the day in such a way as to require students, faculty, or administrators to publicly express a given view of a social policy.” Institutional neutrality, in other words, is integral to developing a campus culture that does not demand students follow a particular set of ideas.

The end of the 2017-2018 academic year marks the first year of implementation of S.L. 2017-196 and provides an opportunity to review how it has affected the UNC system.

In light of this opportunity, the Martin Center has conducted a review of UNC campuses to measure how well free speech and institutional neutrality have been protected. The detailed report compiled by the Martin Center can be found here.

The Martin Center examined three facets of free speech. The first is a rating system of free speech regulations created by a non-profit organization, the Foundation for Individual Rights in Education (FIRE).

The second facet concerns incidents in which groups or individuals have had their free speech rights infringed upon.

The third concerns the commissioning of “bias response teams” that are likely to infringe upon campus community members’ rights.

North Carolina universities have done an admirable job of protecting and respecting free speech on campuses—except for the growing use of bias response teams.

FIRE has an excellent system for rating the free speech climate on campuses. It looks at an institution’s regulations, practices, and actions to determine whether it deserves a green-, red-, or yellow-light rating, with green meaning no observable problems, red meaning that the school has at least one policy that is a “clear and substantial” impediment to free speech, and yellow meaning that the school’s policies are in a gray area between acceptable and not. It has rated more than 450 institutions across the country, including all 16 universities in the UNC system. Seven UNC institutions hold green ratings and are free of policies that infringe upon free speech rights. The other nine have yellow-light ratings, meaning there are policies that can inhibit free speech. Yellow ratings can be the result of overly restrictive social media policies, like at North Carolina A&T University, or vague and broad sexual harassment policies, like at Fayetteville State University.

The UNC system can be proud that none of their institutions received a red-light rating.

The UNC system should also be proud that no shout-downs, disinvitations, or administrative interference in regard to inviting speakers to campus have been reported by FIRE or student-based organizations. Over the past year, speakers who tend to attract threats and protests, such as Tucker Carlson, Christina Hoff Sommers, Dr. Sebastian Gorka, and more, have been hosted by clubs at UNC system schools. While there were protests and backlash, the speakers themselves received no heckling nor did they experience any activity that prevented them from speaking to their intended listeners.

Conservative-leaning clubs from all across the UNC system, such as College Republicans and Turning Point USA, were contacted and asked if they have experienced any issues; none were reported.

The low point for free speech on UNC campuses came with the emergence of “bias response teams.” In response to concerns over bias, racism, and bigotry, colleges nationwide have created these groups, which are usually composed of students and administrators—and sometimes even campus law enforcement. Six UNC universities have bias response teams or some other formal process to report bias incidents.

One example is UNC Asheville’s Bias Incident Response Team, or BIRT. BIRT is part of Asheville’s Office of Multicultural Affairs; its members include students, the dean of students, the associate dean of students and director of residential education, and the assistant vice chancellor for public safety. BIRT’s website states that it helps students with bias complaints, which are defined as “an act of bigotry, harassment or intimidation—verbal, written or physical—which is personally directed against or targets a University of North Carolina-Asheville student because of that student’s race, age, color, disability, national or ethnic origin, political affiliation, religion, gender, gender identity, pregnancy, sexual orientation, or veteran status.” BIRT members are not considered to be “fact-finders,” nor do they have any judiciary authority.

Though they lack judicial or disciplinary weight, BIRT can assist students in filing a report to a disciplinary body at UNC-Asheville. While BIRT is commissioned to “promote conversation about diversity issues,” it may be more likely to chill student speech for fear that saying an impolite, awkward, or unpopular political idea could lead to punishment. Empowering students to report other students for offensive speech is unwise at best and dangerous for serious debate of uncomfortable and complex political issues.

The lack of neutrality at some UNC schools is concerning. In a variety of ways, administrations have failed to make political neutrality a priority. Free speech protections are necessary but not sufficient on a public campus; students should not feel pressured to conform to the political sentiment favored by administrators and professors.

Political bias is common in the books that universities choose for their first-year or summer reading programs. The reading selections are normally discussed during the first few weeks of classes in roundtable discussions and small reading groups.

But these books can also be used to make a political statement. For example, East Carolina University chose their 2018 summer reading to be Evicted: Poverty and Profit in the American City by Matthew Desmond. This winner of the 2017 Pulitzer Prize for general non-fiction is more than just a book; it “transforms our understanding of poverty and economic exploitation while providing fresh ideas for solving one of 21st-century America’s most devastating problems,” according to the book’s description. Though a better understanding of poverty may be an appropriate topic in higher education, a writer’s partisan preferences can affect how they present economic and political solutions for poverty reduction. And that appears to be the case with Evicted.

And it is not just East Carolina that chose biased literature for their summer reading list. The readings for seven UNC campuses could be identified as left-wing, but no campuses assigned readings that could be identified as right-wing. UNC-Greensboro urged their students to read The Distance Between Us by Reyna Grande, a book that follows the story of an undocumented immigrant and her family. Across the state at Western Carolina University, first-year students are encouraged to read The Book of Unknown Americans by Cristina Henriquez. Henriquez’s book has twinges of immigration partisanship present as it follows the story of Latin American immigrants. The books chosen for summer readings tend to be linked to recent political developments and often favor one political party’s views over another.

Aside from summer readings, institutional neutrality on college campuses can be undermined even before students set foot in the classroom. Programs, skits, and speeches during freshman orientation can indoctrinate students and set the social climate. Freshmen learn, for instance, that if you do not go out of your way not to “offend” anyone, and if you don’t lean liberal, then your opinions are not welcome.

Most UNC system schools have nothing clearly presented as biased in their freshman orientation schedules. But North Carolina State University, UNC-Wilmington, UNC-Chapel Hill, and UNC-Asheville have programs where political bias and barriers to free speech can arise. Particularly, UNC-Wilmington’s “Fostering an Inclusive Seahawk Community” and UNC-Chapel Hill’s “Heels United: Our Carolina Community” have great potential to be breeding grounds for politicization. UNC-Chapel Hill’s freshman orientation program gained media attention in 2015 when it was revealed that it included skits that focused on changing students’ speech not to offend others and to subordinate personal beliefs in favor of “culturally appropriate speech.” At the same time, their orientation skits encouraged political conformity and portrayed white, middle-class men in a negative light. It is unclear whether this skit has been updated or changed.

Upon graduation, students walk across the stage to receive congratulations, applause, and their college degrees, but they also may be forced to listen to a partisan speech, depending on whom the university chooses as commencement speaker. Taken as a whole, UNC schools’ choices for 2018 did not seem particularly unbalanced. Roughly half were apolitical, featuring speakers from the business community, the arts, an Olympic athlete, and the mainstream media. Two representatives of the UNC system who are Republicans, system president Margaret Spellings and Board of Governors member Steve Long, were also selected. Three speakers promoted causes, two of which appeared to lean to the left: one argued for “clean” energy and another was a “social entrepreneur.” (There was also a representative of a charity that worked with the homeless.)

While most institutions have not released any statements regarding climate change, the ones that have are quite politicized. In 2015, UNC-Wilmington, Appalachian State University, North Carolina A&T, and UNC-Chapel Hill signed the American Campuses Act on Climate Pledge. This Obama administration initiative aimed “to amplify the voice of the higher-ed community in support of a strong international climate agreement in the United Nations COP21 climate negotiations in Paris.”

The Climate Pledge is a clear violation of institutional neutrality, likely to silence faculty and student critics of anthropogenic global warming.

The Martin Center was not able to find diversity statements at some UNC schools. These include Fayetteville State University, North Carolina Central University, and Elizabeth City State College. At other schools, statements fall within acceptable boundaries, offering boilerplate assurances that administrators will not discriminate against students and want to create an open environment for learning, including those at UNC-Greensboro, Appalachian State University, UNC-Chapel Hill, The School of the Arts, Winston-Salem State University, UNC-Pembroke, UNC-Wilmington, and UNC-Charlotte.

However, statements at other campuses imply a biased interpretation of diversity and inclusion, including those at East Carolina University and UNC-Asheville. This can have a chilling effect on students and faculty whose beliefs differ from the official statement.

The UNC system has shown itself willing to address its shortcomings as free speech on campus became a bigger political issue in recent years. Though some policies remain vulnerable to manipulation or abuse, campus leaders deserve recognition for their fealty to the First Amendment.

The growing popularity of bias response teams, on the other hand, is a serious affront to intellectual liberty; such units should be disbanded.

But regarding institutional neutrality—the other half of S.L. 2017-196—many campuses have much work to do. The issue deserves more serious consideration by colleges who pride themselves on being truth-seeking institutions. To live up to their mission statements and public responsibility, politicized hands must be tied and neutrality respected.

Hopefully, now that schools must report to the Board of Governors on institutional neutrality, they will show the same improvement that has occurred with free speech.