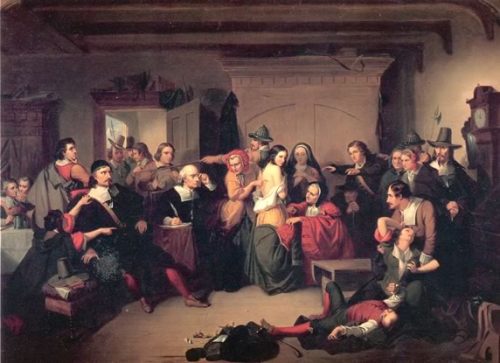 As I watched the antics of the hooded “Antifa” mobs at Berkeley and other large universities last year, I thought that I’d missed something in my many years as a college professor. Unlike Milo Yiannopoulos, Ann Coulter, Charles Murray, and other dissenters from the leftist academic consensus, I had never been assailed by raging anti-fascist students.

Then, last October 25 and 26, I was invited by the Alexander Hamilton Institute and its director, history professor Robert Paquette, to deliver two classroom lectures on fascism and conservatism at Hamilton College, to be followed by an appearance at Bob’s institute. Since I have written on both subjects voluminously, asking me to speak on them should not have caused any waves.

Or so Bob and I thought.

To our surprise, we were greeted by protesters on our way to each of the classes where I was to speak, first on American conservatism and the second on fascism and Nazism. The protesting students and their campus advisers were appalled that I had been allowed onto campus before the administration obtained their permission. From their shouts and taunts, I gathered that they were angry because I supposedly advocate white supremacy (which I never have) and because I don’t think all cultures are equally good (which I do). Those students didn’t find my presence acceptable and accused me of “hate speech.”

Each of my two talks went off without any trouble. The professors allowed students who were not enrolled to sit in on the classes and some of the protesters did so. They were allowed to ask questions after my lectures and I was asked if I identified with the “alt-right” and thought it an important political force. I replied that I regard myself as part of the Independent Right and do not see the alt-right as anything more than a punching bag for the mainstream media. Some students also seemed upset that I do not think that fascism poses a threat to the United States. (For a good discussion of my time at Hamilton, along with several photographs, see this article by Dr. Mary Grabar.)

Within a few days of my departure, I learned that my visit to Hamilton had stirred up quite a disruption. The Government Department saw fit to send around a statement to the Hamilton community. It said that the faculty members were concerned over “multiple complaints from students about racist remarks allegedly made by Gottfried” in his talks. Nothing I had said could be regarded as “racist” except in that “racist” has become a universal smear for any disagreement with leftist thinking. The statement went on to “unequivocally condemn any and all such racist remarks, written or spoken.”

Of course, not one such remark was specified. In retrospect, I can’t imagine anything that I said in classes could be viewed as those “racist remarks” I “allegedly” made. The charges may well have been drawn up before I ever lectured.

Not content to let matters rest, Hamilton’s President David Wippman then sent out his own letter to the community. In his letter, Wippman wrote to “address issues of serious concern” over my appearance on campus.  “First,” he wrote, “we are a community that values all its members. We want and need to foster a diverse, welcoming, and inclusive environment…. Racism, sexism, anti-Semitism, and all other forms of bigotry are anathema to our core values. Claims of racial hierarchy based on spurious notions of genetics are scientifically bankrupt, morally repugnant. I understand, intellectually, morally, and viscerally, the anger and pain members of our community experience when faced with such claims, particularly in the current political climate and historical context.”

Again, I made no such claims and would oppose anyone who made them.

“Second,” Wippman wrote, “we are a community that insists upon academic rigor. That means that we should not invite speakers to address subjects on which they have little or no relevant expertise or who espouse views that have no grounding in reason or fact.”

Agreed–but in fact I have written a great deal on the topics I was invited to discuss, so it’s hard to see what he is getting at.

President Wippman concluded with the typical limp defense of academic freedom: “I am mindful of the need to ensure that faculty members, when making decisions about their research or teaching, retain the autonomy and freedom essential to their academic life. I am also committed, as a matter of deep personal conviction, to promoting an environment that fosters diversity and inclusion and supports and respects all members of our community.”

Like so many other academics, Wippman pays lip service to academic freedom, but then sides with those who would stifle discussion of ideas that might upset any hypersensitive student or professor. But Wippman’s statement did not assuage all the student protesters. One of them wrote a letter to the student newspaper arguing that he was “too tolerant.” The student wrote, “In defending Paul Gottfried’s right to free speech, President Wippman and many others in our community are defending a man who has inspired a terrorist movement.”

No, I have not inspired any terrorist movement.

I am glad to have had the opportunity to speak at Hamilton College, despite the fact that a few students and faculty were unhappy. But I am not at all happy about the fallout. Soon afterwards, Bob Paquette resigned in disgust from his own post as a senior faculty member in the history department, where he had gained fame as one of the leading scholars on the history of slavery in the Western Hemisphere. Also, Bob’s assistant at the Hamilton Institute, who taught a course on American conservatism, lost his post as a lecturer at the college—apparently a case of guilt by association. One should expect anger and collateral damage whenever you deviate from PC sentiments on college campuses these days.

Sorry, Students, but I Have Never Espoused Racism or White Supremacy

A Small College Is Suffering from Self-inflicted Wounds

“Publish or Perish” Isn’t So Bad