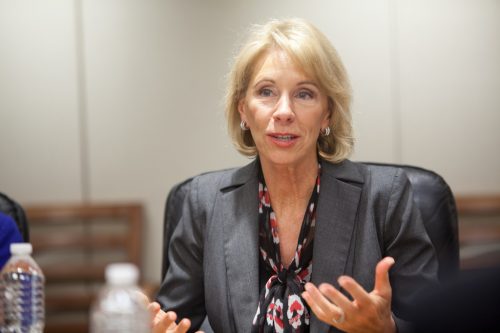 Once again, Education Secretary Betsy DeVos has kicked the hornet’s nest, this time by changing the rules for deciding if a student will be relieved of his or her obligation to repay federal college loans.

The way our higher education finance system works, the federal government makes it easy for students to borrow money for college, no matter how academically weak and disengaged they might be. Many schools have been created to cash in on that money by providing educational programs (mostly with a vocational focus) for people who think they need some postsecondary education to land a good job.

All those schools need to do is become accredited by one of the accrediting agencies recognized by the Department of Education. That isn’t very difficult and, once accredited, the schools don’t have to worry much about their standards. Neither the accreditors nor the government scrutinizes them to ensure that students aren’t wasting their time and taxpayer money.

This system proved to be tempting for school officials who want to bring in as much revenue as possible by enrolling very marginal students with promises of good careers after they graduate. Whether the students were really apt to benefit or the programs were of high quality didn’t particularly matter. If they couldn’t find work and pay off their loans, it wasn’t their problem.

As long ago as the 1970s, federal officials were aware of this. In particular, Caspar Weinberger, while serving under Presidents Nixon and Ford, called attention to the problems with student aid. As this Century Foundation paper states, “HEW Secretary Weinberger recognized that because his agency was in effect endorsing the schools by backing the loans, the federal government bore some responsibility for the abuses. Schools that were heavily reliant on federal loans, he observed, had too strong an incentive to dilute their academic standards and use ‘exaggerated claims’ to enroll students…”

The policies that Weinberger established to mitigate those problems did not continue after responsibility for student aid was shifted to the new Department of Education under President Carter.

When Congress rewrote the Higher Education Act in 1993, it included a provision intended to deal with cases where students were misled or defrauded by their schools. Sec. 455(h) was added, stating, “The Secretary shall specify in regulations which acts or omissions of an institution of higher education a borrower may assert as a defense to repayment of a loan made under this part.” The rule that was subsequently written allowed for a discharge of a federal loan if the school had violated a law in the state where it was located.

Thus, federal law recognized a “Borrower Defense to Repayment” (BDTR). But during the next twenty-plus years, it was used by students only five times.

Then, in 2015, the demise came of Corinthian Colleges, a large for-profit chain that had come under intense state and federal scrutiny for its deceptive practices. Suddenly, thousands of students who had borrowed to attend had their plans disrupted. Activist groups realized that many if not all of those students could be eligible for relief under BDTR. Word spread fast and soon the Education Department was facing more than 30,000 claims from Corinthian students and graduates who wanted their loans discharged.

The Obama administration began to handle the deluge, but Education Secretary Arne Duncan saw that the old regulation lacked clarity on exactly what sort of “act or omission” would qualify for discharging loans. Therefore, in March 2016, the Education Department announced that it would begin negotiated rulemaking, a process that brought together a large number of interested parties. But months of discussion failed to lead to agreement among the negotiators, and the department wrote its own rules.

Those rules were published on October 28, 2016, and scheduled to take effect on July 1, 2017. Under it, students could pursue BDTR claims under one of three grounds:

Another crucial feature of this rule was that debts could be handled on a class-wide basis rather than individually. Students only had to show they had attended Corinthian or other identified “bad actor” schools during the last five years to qualify, under the assumption that all students must have been deceived or defrauded.

Clearly, the Obama administration wanted to make it easier for students to succeed with their BDTR claims. After all, it had demonized for-profit colleges and wanted to be seen as friendly toward students. Still, the new rules caused some apprehension. Education law attorney Katherine Lee Carey explained here, “There is genuine concern that broadening this rule too much could open a Pandora’s box. Even the Department of Education seems to recognize, and wants to guard against, frivolous claims made by disgruntled students, or those who simply think this is the loophole that gets them out of student debt.”

Obama officials hurried through thousands of claims before the Trump administration could take over. In the last three weeks, before they relinquished control, they approved 16,000 claims, rejecting none. When they left office, there was a backlog of some 48,000 claims, with more pouring in daily. (The above-noted Century Foundation study shows that the vast majority are against a fairly small number of for-profit schools, but that there are also claims against non-profit and public institutions.)

More than $500 million in debt relief was dispensed under the Obama administration. The taxpayers have a huge stake in the way BDTR is handled in the future.

This new approach to ‘borrower defense’ will reduce the cost to the taxpayers and will prevent some students from trying to use the bureaucracy to escape from their loans.

Upon taking the reins at the Education Department, Secretary DeVos ordered a suspension of BDTR decisions and tasked the department’s inspector general with reviewing the rules and procedures in use. Last June, she decided to start afresh on the rule-making.

Late last month, the department announced its new approach to BDTR. The big change from the old is that instead of making all-or-nothing decisions on loan relief, it will look at how the student’s earnings compare with those of peers. Relief will be calculated on a sliding scale. Therefore, students who, despite any deception or fraud by the school are doing about as well as similar students, will receive only slight loan relief. Those who have very low earnings will still receive full discharge.

Secretary DeVos stated, “This improved process will allow claims to be adjudicated quickly and harmed students to be treated fairly. It also protects taxpayers from being forced to shoulder massive costs that may be unjustified.”

The Wall Street Journal editorialized in favor of the changes and I agree: “The department was discharging debt carte blanche without accounting for the value students received from their education. Before awarding damages, judges are supposed to consider whether plaintiffs are harmed by alleged misrepresentations and then weigh the severity of their injury. Department adjudicators were doing neither.”

Although this new approach to “borrower defense” will reduce the cost to the taxpayers and will prevent some students from trying to use the bureaucracy to escape from their loans, it does nothing to solve the underlying problem. That problem is irresponsible lending by the government, which often results in trouble even when the college hasn’t done anything to mislead the student. The only solution is to get the feds out of the business of financing postsecondary education.