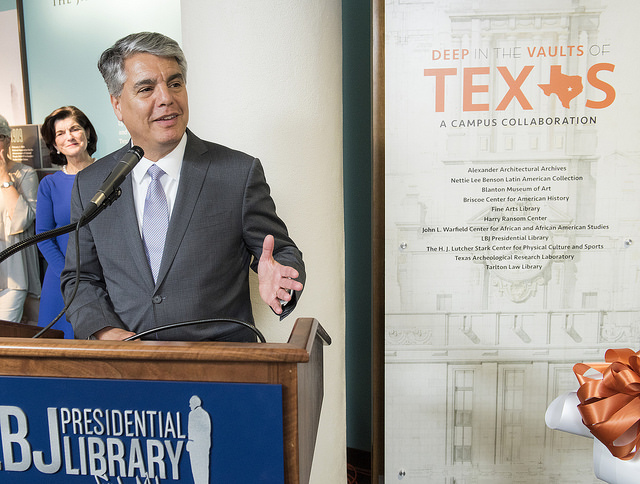 As an alumnus of the University of Texas Law School and the father of a recent UT graduate, I pay close attention to what is going on at my alma mater. Sadly, I have witnessed at UT many of the ailments afflicting higher education generally: rising tuition, declining academic performance, bloated administrative bureaucracy, curricula infected with identity politics, officious “diversity” enforcers who abuse their authority, and a climate of political correctness that overreacts to every passing fad.

At the same time, Texas politics have a sordid tradition of cronyism and, as the flagship of the state’s public university system, UT is no exception.

Money talks, sometimes quite loudly. UT has long been regarded as a prized fiefdom for the benefit of a powerful clique of wealthy donors and influential legislators who enjoy perks, such as invitations to watch football games from the UT President’s exclusive suite and preferential admissions to UT for their unqualified offspring. In the Lone Star State, the ultimate status symbol for Brahmins is membership in the UT inner circle.

When former governor Rick Perry attempted—unsuccessfully—to implement higher education reform a few years ago which would have disrupted the cozy status quo, he was met with furious resistance. The UT crony crowd circled the wagons and repulsed the reforms. One of Perry’s appointees to the UT Board of Regents, Dallas businessman Wallace Hall, barely escaped impeachment and prosecution (on trumped-up charges) for exposing a back-door admissions scandal that led to the resignation of UT’s president, Bill Powers. (For details, see my American Thinker article).

This combination of cronyism and politically correct hijinks has created a sinister brew.

That was the setting when two UT sophomores went on a date in the spring of 2016. (The account that follows is based on press reports of the subsequent litigation). A woman (referred to only as “Jane Roe”) invited a man (“John Doe”) to her sorority’s afternoon boat party on Lake Austin, which was to be followed by a sorority formal that evening. While the couple attended the boat party, Roe consumed five glasses of sangria.

After the boat party ended, the couple attended the formal for about 90 minutes before returning to her sorority’s house so Roe could check in and get something to eat. Then the couple walked to Doe’s apartment where Roe agreed to have sex with Doe. It had been four hours since her last drink. Roe spent the night with Doe in his apartment.

If the story ended here, it would be just another casual hook-up between consenting college students after some partying—a common occurrence on campuses across the country.  But it didn’t end there.

A few days later, Roe decided that she had actually been too intoxicated to make a good decision about whether she wanted to have sex with Doe that night. So she filed a sexual assault charge against Doe under UT’s policy. Because she was drunk, she claimed, Doe had raped her. In due course, her claim was investigated and presented to a hearing officer, in this case a UT chemistry lecturer.

In February 2017, the hearing officer ruled in favor of Doe, concluding that Roe, while intoxicated, was not incapacitated. Rather, the hearing officer found, “the complainant made rational decisions throughout much of the evening prior to and after the sexual intercourse.”  As a result of that finding, Doe was cleared of any wrongdoing.

Again, if the story ended here, it would be just another baseless accusation by a confused (or regretful, or scorned) young woman who had second thoughts about a hasty tryst, foiled by a fair and neutral adjudicatory process. But it didn’t end there.

Under UT policy the hearing officer’s decision is not final but is subject to review by UT president Greg Fenves, who, as I explain here, has been pushing “progressive” themes ever since becoming UT’s president in 2015.

As it turns out, Roe’s father is a significant donor to UT who holds one of the many “advisory” roles coveted by UT cronies.

As it turns out, Roe’s father is a significant donor to UT who holds one of the many “advisory” roles coveted by UT cronies. The denouement was predictable: In April 2017 Fenves overturned the hearing officer. He ignored the relevant definition for “incapacitation,” and determined (contrary to the evidence) that Roe was “highly intoxicated” at the time she agreed to have sex. Fenves decreed that Doe must suffer a five-semester suspension.

Doe was declared a rapist by Fenves’ unilateral whim.

An almost inevitable lawsuit was filed a few months later, with Doe challenging his suspension as a violation of due process and tainted by a conflict of interest. Roe’s wealthy father, the suit alleged, had improperly influenced Fenves to rig the outcome in his daughter’s favor.

Doe’s attorney, Brian Roark, stated that Fenves “allows advocacy to leak into what should be neutral decision-making.” That observation is right on target.

The publicity generated by the case, which gained national attention, put Fenves and UT in a very unflattering light.

Fortunately, this story has a happy ending—for Doe.

As a result of the lawsuit, Fenves was scheduled to testify under oath in federal court in late November. The proceedings up to then had been conducted in relative secrecy, but that was about to change. That’s because in court Roark would be able to examine Fenves about his highly-suspect decision on the record, with the attendant public scrutiny and media coverage. Not surprisingly, neither Fenves nor UT wanted to reveal the details of this squalid tale.

To avoid that, just before Fenves was due to testify, UT announced that it had “settled” the lawsuit, reinstating Doe, rescinding his suspension, and clearing him of any wrongdoing. Fenves would therefore not have to take the stand.

The incident was a damning indictment of the cronyism at UT and the leftist inclinations of its president. The last-minute settlement earned Fenves the ignominious headline, “UT president caves rather than tell judge why he personally overturned student’s exoneration.”

Justice Louis Brandeis famously said that “sunlight is the best disinfectant,” and this case shows that the fetid backrooms of UT administration could sorely stand to be disinfected.