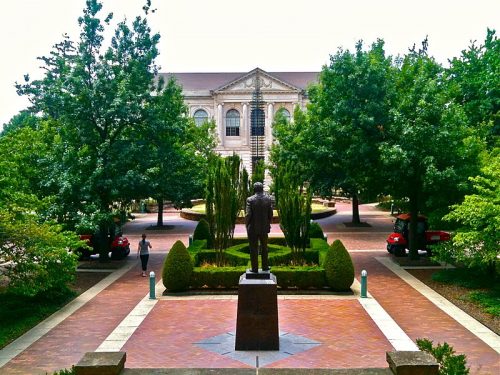 The state of Arkansas is facing an existential threat to academic freedom.

That threat, however, is of a type that normally doesn’t receive public attention. The press typically writes about speech codes and political interference with research on controversial subjects, but as serious as those threats are, they are nothing compared to that posed by central administrators.

In our state, lawyers working for the University of Arkansas are rewriting the rules governing tenure in ways that fatally undermine academic freedom.

The purpose of academic freedom is to protect freedom of speech, thought, and expression in the university setting so that learning and knowledge can flourish. Tenure is the primary mechanism by which academic freedom is ensured. It prohibits the termination of faculty for any reason that could plausibly be used to stifle academic speech and inquiry. These protections recognize the critical role of professors as truth-finders and truth-tellers.

Tenure and academic freedom have been bedrock principles in higher education for a century.

Unfortunately, in recent decades some university administrators have engaged in an all-out assault on academic freedom by seeking to (1) replace outspoken full-time faculty with part-time adjuncts, and (2) gut the rules governing academic freedom and tenure.

Adjunct professors have virtually no job protections. Indeed, rather than serving as employees of the schools where they work, they are independent contractors hired to teach a specific course or courses. Because of this, adjuncts are far less likely to engage with controversial subjects. And they virtually never speak out publicly or even internally about issues of university governance. After all, a single comment disapproved of by college administrators can cost adjunct faculty their jobs—and we have seen it happen.

The second type of attack is rule changes. Some administrators are pushing for definitions of tenure that provide no assurance that dismissal will be limited to causes unrelated to the content of a professor’s research, teaching, or public service.

The assault on academic freedom in Arkansas is of this latter variety, and it is being directed by the in-house attorneys for the University of Arkansas. They have circulated a proposal—drafted without any input from faculty—that would eviscerate tenure and academic freedom in this state.

Consider three of the most problematic changes they recommend.

First, under the proposal, a lack of “collegiality” is a standalone basis for termination. The policy states that failing to “work cooperatively with others” justifies instantaneous dismissal. This means that uncollegial behavior would be one of several emergency-type grounds for immediately firing professors. It places such behavior on the same plane as “threats or acts of violence.”

The American Association of University Professors (AAUP) has long rejected collegiality requirements in tenure determinations of any type, including decisions to grant tenure or to terminate a teacher, because such requirements have a documented history of abuse in academe.

Second, under the proposal, a single unsatisfactory annual evaluation by a single administrator is sufficient for dismissal, if the administrator determines that the faculty member is not being sufficiently “cooperative” in trying to remedy the “unsatisfactory” performance. So, again, the University’s Counsel—who, it so happens, is the chief prosecutor in faculty dismissal proceedings—wants to leverage “cooperation” as a tool to eject tenured professors.

The upshot of this change is striking: if a faculty member resists a single negative review, appeals that decision internally, or objects to colleagues or administrators about that review, he can be fired for lack of “cooperation.”

This incredible danger to the very foundations of the academic enterprise reveals why the AAUP has made it clear that using “unsatisfactory” as a standard is not sufficient to protect academic freedom. The word is highly subjective, making it prone to manipulation by administrators displeased with any aspect of a faculty member’s work, including dissent regarding school operations.

A professor could be fired merely for commenting publicly or internally about a school’s alleged financial improprieties or admission practices.

Third, under the current rules, comprehensive free speech rights for faculty aptly extend to all subjects. Under this proposal, however, such rights encompass only teaching and research—eliminating protections for speech associated with public and university service. This means, for example, that a professor could be fired merely for commenting publicly or internally about a school’s alleged financial improprieties or admission practices.

The proposal constitutes a major constriction of academic freedom. If adopted, what impact would it have?

First, faculty recruitment and retention will be severely damaged. When candidates ask about tenure and academic freedom in Arkansas, hiring officials will be legally and morally obligated to explain to them that their tenure rights are heavily circumscribed in comparison to those at other colleges. And faculty currently working for the university will be more likely to leave, causing a brain drain, as other schools have experienced in similar circumstances, such as the University of Wisconsin.

Second, faculty will be restricted in their activities. In particular, Arkansas professors will be far less willing and able to research, teach, and perform public and university service relating to controversial subjects.

That is because when academic freedom and tenure protections are undermined, it becomes easy for administrators to find legally plausible pretexts to punish faculty for protected speech in research, teaching, and service. Recall that the proposal permits termination if a faculty member is not sufficiently “cooperative.” It takes little imagination to see how such a standard will be used to deem professors “uncooperative” if they express unpopular views in any domain of their work.

One might respond by saying that no administrator or faculty body would ever abuse the authority granted by the proposal. History indisputably demonstrates otherwise.

Third, the impact of the changes will be felt most keenly by minorities—racial minorities, religious minorities, and political minorities. That is what happens when individual rights are limited as in the proposal, whether in higher education or other institutional settings. Thus, one of our greatest fears is that the proposal will put conservative faculty in the cross-hairs because they are a distinct minority on campus.

All of those problems together will critically damage the University of Arkansas. Most importantly, the education of our students will be diminished in countless ways. And the research we produce will be less helpful to society. This weakening of teaching and research will injure our entire state—a state starved for college graduates who learned to think critically from faculty who can speak freely.

Given the dramatic harm the proposal will cause, why are the university attorneys pushing for these changes?

They claim that the school needs more flexibility so that it can dismiss ineffective faculty rapidly. That is both false and disingenuous. The university has already admitted the following: (1) over many years, it has confronted only a tiny number of ineffective faculty—meaning that the vast majority of Arkansas professors are fully effective, and (2) the current tools have successfully removed ineffective teachers.

Has the university somehow recently hired a critical mass of yet-undiscovered incompetent professors, requiring a gross diminution of tenure and academic freedom rights? Not a shred of evidence supports such a conclusion.

Let us present an alternative theory. Undermining tenure and academic freedom will make the lives of University Counsel easier. In particular, the proposal grants the school and its lawyers a plethora of excuses to fire professors who “rock the boat” in ways disapproved of by central administrators. The proposal also removes due process rights ensured by the current rules, emasculating termination hearings.

Last but not least, by eliminating protections for service-related speech, the proposal enables the school to quash faculty commentary regarding university operations.

The assault on tenure and academic freedom in America is part of a long-standing trend toward the consolidation of power within university central administrations. College officials all too often prefer a compliant faculty who teach, write, and speak only on uncontroversial subjects. But that fundamentally contradicts the essence of higher education.

Unfortunately, attorneys for the University of Arkansas appear set on dragging our state back to the 19th century, a period when universities were all too often marked by the imposition of stultifying conformity.