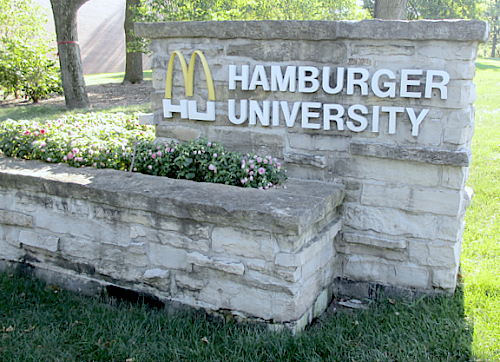 The term “McDonaldization” was coined by sociology professor George Ritzer in 1993. He meant for it to describe “the industrial process of rationalization that [was] expanding beyond industry into the cultural and educational spheres.”

Ritzer’s term caught on and in 2002, Dennis Hayes and Robin Wynyard applied it to higher education in a book they edited entitled The McDonaldization of Higher Education.

The book describes the attempt by education bureaucrats to improve higher education through the same processes of rationalization applied to industry, to make the university more efficient at delivering its “product” (degrees) to its “customers” (students).

For Hayes and Wynward, the effects of McDonaldization were negative. The point of a degree prior to McDonaldization was to signal that one had acquired a certain amount of knowledge, but after it, degrees lost their connection to education in a meaningful sense. The point of the McDonaldized degree is just to have the credential needed as an increasingly dubious means to a good job.

Hayes has recently edited a new volume entitled Beyond McDonaldization: Visions of Higher Education. It continues the descriptive and critical role of the earlier volume and outlines potential avenues of reform.

Hayes is a professor of education at the University of Derby (UK) and director of Academics for Academic Freedom. He has spent years working for reform of the academy in the English-speaking world.

According to Hayes, the ironic effect of the rationalization of the university is to make it irrational. Rather than “passing on the best that is known and thought to students,” the McDonaldized university is increasingly inefficient, bogged down in bureaucracy, and unable to complete its basic function—no matter how many students receive degrees.

The essays are varied, leaving the reader to ponder a variety of vistas for reform.

Gavin Poynter, Professor Emeritus of East London University, argues in “Beyond Instrumentalism: Why Education is Living on Borrowed Time” that it is ironic that we now treat higher education as instrumental to economic betterment. Students and governments pay enormous sums for little in the way of either marketable skills for individuals or broad economic growth.

He notes that over fifteen times as many students received degrees in the UK in 2010 as in 1960 and the US saw an increase of nearly five times as many students receiving degrees in the same period. Between 2006 and 2015 student debt increased from $481 billion to $1.3 trillion. In a worsening job market, higher education continues to get a boost as the best means to a better job. Poynter writes, “The ideological hold of vocationalism has strengthened as the economies of both nations have continued to stagnate.”

In a similar vein, “Beyond Pragmatism: The Pedagogy of the Impressed” by Austin Williams warns against using China as a model for education reform. Williams is a professor at Xi’an Jiaotong-Liverpool University (XJTLU) in China. While many have been impressed by China’s supposed achievements, Williams notes that its utilitarian approach to education has left its students bereft of creativity, taught only a “mechanical skill set” of ironically little value, and encouraged to “succeed” even through cheating. Such reforms leave little room for the pursuit of knowledge for its own sake.

Williams notes that China is essentially copying “pragmatic,” instrumentalist reforms in vogue in England and the US. By looking to China for a model, Western education reformers are chasing their own proverbial tail.

Angus Kennedy’s “Beyond McUniversity: The University as it Should Be” and Clare Hornsby and Sebastian Morello’s “Beyond the Secular University” advocate a return to the traditional liberal arts, but they differ as to what that might mean.

Kennedy points to the institutional manifestation of the university from the Platonic Academy to the German system of research and teaching and argues that the common thread that runs through them all is universitas, the one. The university gets its name from its primary pursuit, the attempt to understand the one, the truth, the unifying principle that binds it all together. The university should be a model for society, a community of thinkers of diverse backgrounds and views who come together to analyze and compare ideas, to think and judge for themselves. The Enlightenment best reflected this role for the university.

The university today is in the process of jettisoning academic freedom, the core freedom attaching to the ideal of a community of scholars. The massive increase in students in the UK and the US has dealt a blow to the quality of education and transformed the university from the model the rest of society should follow to a reflection of society at large.

Rather than being a leader, higher education is a follower. The university no longer pursues truth for its own sake. Now it caters to its audience, simply providing a plethora of degrees of decreasing value to an ever-increasing number of students.

Hornsby and Morello reject the secularization of the university as inevitably culminating in something like McDonaldization. The religious impulse at the heart of the Medieval university is at the center of the liberal arts. Only with the restoration of the study of theology and philosophy as the central mission of the university can it return to its original purpose of pursuing truth.

Kennedy, Hornsby, and Morello argue that the best solution is a complete re-founding of the university. This means the founding of new universities, new institutions that would “[find] new answers to the question of how to live together.” These institutions would be devoted to educating, not merely credentialing, their students and providing a model for how society ought to be.

Perhaps the book’s most interesting essay is “Beyond Censorship: Toward a Republic of Science” by Adam Kissel. Kissel, recently appointed Assistant Undersecretary of Education, argues that the pursuit of knowledge at the heart of the university requires structural reforms to protect free speech and free inquiry.

He sees threats to these values emanating from ideology (as the main driver of censorship), government (for distorting the academic environment through funding), and professional organizations (as monopolistic gatekeepers).

Kissel’s solution is a “republic of science.” Drawing an analogy with a constitutional republic where freedom is preserved “through institutional arrangements that set power against power,” he argues for privatization of university funding and decentralization of licensing. As it stands, the government is the primary source of funding and the primary enforcement mechanism of academic licensing. As such, ideological dissent can come with a heavy cost in terms of funding and the ability of academic programs to maintain licensure.

Many professional associations, such as the American Bar Association, have imposed ideological straitjackets on their members. If they are granted a monopoly on licensure by the state, entire professions and their academic counterparts fall under what is in effect government censorship.

Privatizing research would decentralize the sources of funding. Of course, private sources of funding will have their own agendas, but at least they must compete with each other. A decentralization of licensing would diminish the capacity for broad ideological litmus tests, often imposed at the level of the academic department. The problem is not an ideological agenda per se, but that an ideological agenda is given a monopoly on power in the university, especially through the coercive force of government, whether in funding or in licensing.

By definition, universities subject to ideological agendas are not in the business of pursuing knowledge for its own sake. Kissel’s proposal for a “republic of science” would remove the institutionalized sources of ideological agendas that distort research and suppress academic freedom in the university, but nonetheless provide a means whereby research can be funded. That would bolster the ability of the university to be the place where knowledge is pursued, no matter the perceived ideological character of that research.

Hayes explores what he calls the “therapeutic university,” a by-product of the McDonaldized university. He sees the therapeutic turn in the university as “complementary” to McDonaldization. As universities became increasingly concerned with their market value and began to treat students like commodities, the need for dealing with their “ontological angst” became apparent.

The goal of the therapeutic university is not to educate students, but to make them comfortable, which means stepping into the role of therapist. But if universities’ primary goal is to serve as sources of therapy and comfort for students, then they must reject the traditional notion of the university as the place where knowledge is accumulated and disseminated.

Knowledge, after all, can be offensive, contributing to “ontological angst” by challenging students’ assumptions, and making students aware that they’re often wrong. A university concerned with therapy is a university unconcerned with disseminating knowledge.

By the end of Beyond McDonaldization, the need for reform is clear, but the path back to the university’s founding purpose, the pursuit of knowledge, is still in doubt.

Contra the “McDonaldization” of Higher Education