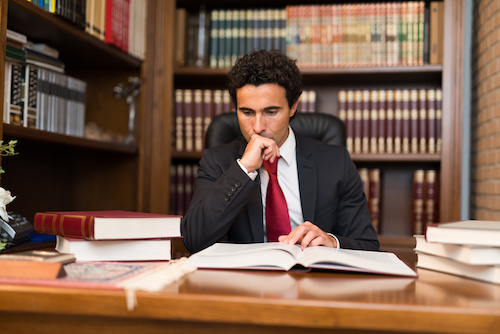 Law school faculties hold a sacred trust. We guard the outermost portals into the legal profession, a group that wields powers to shape society in profound and lasting ways.

Several years ago, the law faculty on which I serve decided to fulfill our trust by educating lawyers in the great tradition of the liberal arts—to think critically and live virtuously. Students who enroll in the Thomas Goode Jones School of Law begin their studies in our Foundations of Law course, which is designed to dispose them to form their intellects and characters while they learn the techniques of legal practice.

In the course, students consider matters both profound and useful. They examine the relationship between legal justice and natural justice, the difference between rights and privileges, the operation of formal logic in legal arguments, different approaches to interpretation and adjudication, and much more.

Along the way, students are sure to encounter at least one idea that they find disagreeable. They learn how to disagree (rather than merely take offense), which requires them to understand ideas and not simply to reject words that they find emotionally uncomfortable.

Our Foundations course, which all students take in their first semester, is unique among core law school courses. Yet that understates the neglect of virtue in legal education. Those who control the gates to legal practice think a lot about the knowledge, skills, and professional qualifications a person must attain before becoming a lawyer. But on the whole, they give little thought to what sort of person a lawyer should be.

Law school admission standards, final examinations in courses, and the bar exam combine to filter out potential lawyers who lack the intellectual ability or public record to warrant admission to the bar. We sometimes disagree about the exact division of labor between admission officers, professors, and bar examiners in this filtering process. But few doubt that the overall job is to quantify and enforce objective standards, like a harvest operation assessing fruit for size, color, and shape. Data drive legal education toward the achievement of measurable skills, especially the ability to pass the bar exam and proficiency in the techniques of legal practice.

Virtues, however, do not fit neatly in this process. They are not easily identified or quantified. In an era in which moral truth is thought to be subjective, lawyers are among the least likely to believe in objective standards of right conduct. Thus, law schools tend to emphasize only the information needed to pass the bar and the skills required for legal practice.

Nevertheless, legal educators need not choose between training technicians to practice law competently and educating human beings to practice law virtuously. We can and should teach law students to discipline their minds and characters according to the habits, dispositions, and knowledge of law. That means not only techniques for achieving desired results for clients, but also a reason for choosing and acting in the world, a way of being and of bringing about legal and natural justice.

In our Foundations of Law course, we pursue that goal through engagement with what one might call the “great books” of the law. The readings include not only landmark judicial decisions, declarations, and statutes, but also classic dialogues, treatises, letters, and stories. Socrates and Aristotle, Moses and Saint Paul, Blackstone and Bentham, Hamilton and Story, Holmes and Hart and Finnis. These and other ageless guides offer to lead students toward the elevation of their nature.

Some of the most powerful readings in our course are parables. Parables defy contemporary pedagogical categories. But the parable is an effective (and ancient) method for teaching law and virtue, for it raises and motivates questions that are worth asking.

In one parable, found in the Gospel according to Mark, a man plants a vineyard and builds a winepress and tower on his land. He then leases the whole enterprise to tenants and goes away. When the time comes, he sends servants to collect the rent. Rather than paying what they owe, the tenants mistreat the servants, sending some away empty-handed, beating others, and even killing some.

Then comes the climax. The owner sends his own son. The tenants kill the son, mistakenly thinking that by their violent act they have acquired the son’s inheritance. But the owner is on his way to destroy the tenants. The tenants do not understand that their doom is imminent. Overly confident in their affluence, they cannot see obvious truths. Their minds are darkened.

A student who is not yet awakened to enduring truths might scoff at the tenants’ folly. But one who recognizes that we inhabit legal institutions built by others, just as the tenants inhabited vineyards built by another, might be motivated to inquire whether we are more like the tenants than we care to acknowledge. A student who is merely motivated by self-interest will perceive at least the value of learning the law of inheritance.

A student who is slightly more alert might ask why there are vineyards and wine presses rather than barren wilderness, and why there are courts and bar associations rather than a state of war of all against all. This inquiry might precipitate gratitude, which can transform one’s understanding of property law from a simple grasp of rules to a richer understanding of dominion, stewardship, and authority to preserve and advance the common good.

Further reflection along these lines might alert the student to the existence of duties toward those who came before us and those who will come after. Before the parable of the ungrateful tenants, students have read the dialogues of Socrates and Crito, Ismene and Antigone. The student awakened by gratitude might recall that Socrates and Antigone shared a sense of duty to something beyond themselves—Antigone to her dead brother, Socrates to the laws of Athens which secured for him life and all that makes one happy in it.

A student who is fully alive might perceive that she is in some ways like the vineyard itself. She did not create her own faculties. That she came to exist was not inevitable. She might recognize that, like the vineyard, she can be made fruitful with the proper cultivation. She might wonder what sort of cultivation is fitting to a being of her kind. She might inquire with Aristotle what kind of being a human being is. With Martin Luther King, Jr. and Thomas Aquinas, she might ask what human nature signifies for justice and for law.

With Locke, Blackstone, and the signers of the Declaration of Independence she might contemplate whether human beings are bearers of rights as such, apart from human law. With Bentham and Holmes she might perceive the imperative of listening to the articulate voice of the sovereign. And yet, with Lon Fuller she might also inquire whether the sovereign can make of law just what he wills it to be.

Law students who grapple with such questions come gradually to see transcendent truths. They are not daunted by changes in the law, for they can locate new rules within enduring categories. And they perceive the ends that ennoble their practice of law.

This summer, Carolina Academic Press will publish a text book that my colleague, Robert McFarland, and I designed based on our Foundations of Law course. We hope that the existence of such a book will bridge over one obstacle to the re-entry of virtue into law school curricula.

Law Schools Guard Entry to the Profession and Should Teach Virtue