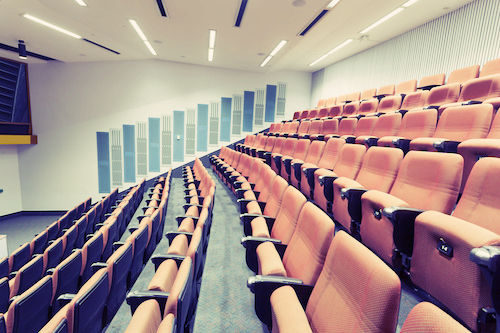 Vice President Mike Pence spoke to the graduating class of Notre Dame, drawing attention to the loss of free speech on American campuses. He denounced the “noxious wave that seems to be rushing over much of academia.”

The problem is that this wave is coming from within academia, not “rushing over” it as if from outside. Its source is a particular way of thinking about higher education and only secondarily about free speech.

To even the casual observer, each week brings a new incident of campus outrage to our attention. That the Vice President of the United States should feel the need to intervene suggests two things—that the issue is prominent enough to call for his intervention and that there is a political constituency for protecting free speech at American universities and colleges.

At the state level there are several attempts currently underway to address this issue. Bills have been proposed in several states to protect the speech rights of students and faculty.

Last year, legislators diverted $445,882 of funding away from the University of Tennessee’s Office for Diversity and Inclusion. This led to the resignation of the Diversity Chief last year, who immediately moved to a similar post at the University of Washington. And an Iowa state legislator, Bobby Kaufmann, has proposed a bill to punish state universities that used public funds for “healing spaces” related to the election. He refers to the legislation as the “suck it up, buttercup” bill. Both of these preceded the recent physical violence on campuses.

At the federal level, the reauthorization of the Higher Education Act is an opportunity to do something positive. The National Association of Scholars and the Goldwater Institute are both recommending significant guarantees of free speech rights on any campus that receives federal money, which is all but a handful. In a way, these are well-planned versions of President Trump’s reaction to the riots in Berkeley earlier this year. He tweeted: “If U.C. Berkeley does not allow free speech and practices violence on innocent people with a different point of view – NO FEDERAL FUNDS?”

As well-intentioned as some of the legislation may be, it assumes that starving the PC warriors of funds will reduce their influence. One would think that the half-million dollars now denied to Tennessee’s Office for Diversity and Inclusion should have a real result, for instance. However, while initial reports suggested the office would close, its website lists eight current employees. Diversity offices may be the only parts of higher education to thrive with zeroed-out budgets.

The real power of political correctness that legislators and even the vice president would like to combat does not reside in particular offices or paid positions. The power resides in faculty and administrators who almost universally support it and increasingly see their jobs as developing support for it among students.

The statistics on faculty political leanings are staggering. The organization Heterodox Academy has been highlighting the movement of faculty towards the far left. As Nicholas Kristof reported in the New York Times, 18 percent of all social scientists describe themselves as Marxists, making them a larger group than Republicans on American campuses. At this point there might be more Marxists on American campuses than in Venezuela or Cuba.

The political imbalance of American campuses is easy to see, but the significance goes beyond mere partisanship. The underlying problem is that a significant portion of the American left thinks the mission of education is to reform American culture, not teach a particular body of knowledge. Angelo Codevilla has a very good article in the Claremont Review of Books on this topic. As he explains, this mission to change society is the source of political correctness and is the reason much of higher education has turned into indoctrination.

Higher education used to be understood as mastering a body of knowledge. It still is in the healthier parts of the university. But in those where political correctness is most deeply rooted, the idea that some things are more important to know than others is anathema. This is why courses on zombie movies are offered alongside Shakespeare as equally worthy of study. Try making an argument in your nearest English department that one is inherently better than the other and see where you get.

Political correctness is about power because it is not about knowledge or argument. The direction of cause and effect must be made clear. When you abandon the distinction between, say, an important work of literature and a trivial one; when you can scoff at Matthew Arnold’s notion of “the best that has been thought and said,” as most academics do, there is no way to judge between better and worse. When you cannot judge, you can say nothing. As the 20th century philosopher Ludwig Wittgenstein put it, “Whereof one cannot speak, thereof one must remain silent.”

Students are shouting down and disrupting lectures because they cannot speak of the merits or demerits of disfavored arguments. They have been taught it is impossible to do so. But neither are they happy with silence. Their only alternative is shouting and imposing silence on others.

A politically correct education is not about learning anything. It is about changing the students. In his new book, Out of the Ashes, Anthony Esolen describes the experience of sending a child to any of America’s colleges and universities: “You sink yourself in debt to discover that your sons and daughters have been severed from their faith, their morals, and their reason. Whorehouses and mental wards would be much cheaper. They might well be healthier, too.”

It is an indication of just how far things have gone that on many campuses Esolen’s attitude towards sex workers and the mentally ill would be considered the outrageous part of his comment, not the process he describes.

Legislative efforts to protect free speech are important and ought to be encouraged, but legislation can go only so far. Alexis de Tocqueville, the great observer of American democracy, argued that tyranny in democratic societies takes on a very distinct character. It does not attack the body, but rather the soul. It says to its victim, writes Tocqueville: “You shall remain among men, but you shall lose your rights of humanity. When you approach those like you, they shall flee you as being impure; and those who believe in your innocence, even they shall abandon you, for one would flee them in their turn.”

Two cases of this have just occurred. Anthony Esolen, for writing comments like the one above, felt forced out of Providence College after several decades of distinguished teaching. More recently, Paul Griffiths resigned from Duke Divinity School due to the way he was treated after he criticized a diversity workshop. Free speech protections would mean little to them. They were not fired. They resigned because they were ostracized.

Physical violence on campuses, from Middlebury to Berkeley, has raised the stakes for those who are not politically correct. It has certainly brought campus problems to the attention of more people. But our campuses could return to peace and quiet without any good being achieved. We need to return to the idea that higher education is about mastering bodies of knowledge, not assuming a posture.

When Mike Pence spoke at Notre Dame a number of students stood up and walked out of their graduation ceremony in protest. I suppose they were exercising their free speech without violating anyone else’s rights, but their actions betray an irrationalism, a refusal to engage in argumentation no different than the shouters and rioters.

Free speech is important, but without a culture willing to engage in what others say, it merely provides a podium in an empty room. So two cheers for legislation that protects our freedom to address it, but hold that third cheer for a while. We need to address the very idea of what education is before this problem can be solved.

In Defense of Academic Publishing