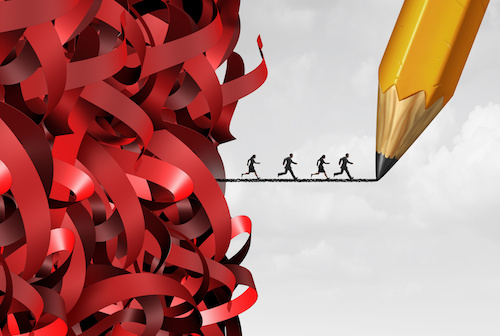 American campuses have drifted away from academia and toward administration. The shift badly impacts the traditional mission of both college and students. Ideally, college infuses knowledge and critical thinking through a free flow of ideas. But modern campuses are ideological battlefields where real debate is discouraged. Ideally, students are exposed to a wide range of perspectives. Instead, “incorrect” views are silenced because they are punished. Students are the main losers.

Administrative bloat bears significant responsibility for the decline in educational quality and civility. The decline is partly due to the diversion of scarce funds from academia to administration and partly due to the ideological slant of administrative policies rooted in identity politics, such as mandatory sensitivity training on race. Identity politics occurs when people identify as a class based on secondary characteristics, such as gender, rather than as individuals with a shared humanity; some classes are seen to be at war. The policies expressing identity politics create conflict and impoverish education.

Universities have increased spending, but very little of that increased spending has been related to classroom instruction; rather, it is being directed toward non-classroom costs. As a result, there has been a growth in academic bureaucracies, as universities focus on hiring employees to manage or administer people, programs, and regulations. Between 2001 and 2011, these sorts of hires have increased 50% faster than the number of classroom instructors. This trend…has become ubiquitous in…American higher education. (p.2).  [Data draws on WSJ article “Deans List: Hiring Spree Fattens College Bureaucracy—And Tuition.”]

The situation is worsened by the fact that administrators tend to be highly paid. The 2012-13 “Administrators in Higher Education Salary Survey” conducted by the College and University Professional Association for Human Resources found the average annual salary of a “Chief Executive Officer of a System” in a two-year institution to be $291,132; in a four-year institution, $370,470; in a doctoral context, $431,575. Annual salaries may not render an accurate picture, however, as they do not include benefits or non-salary compensation. The Boston Globe, for example, stated that the President of the UMass system received at least $769,500 in annual compensation “including salary, annual performance bonuses, and car and housing allowances.”

Since administrators must comply with federal or state regulations, most of them also have paid staff. The average hourly wage for an administrative assistant at the University of California is $20.98 per hour or $839 a week based on a 40 hour week or roughly $43,600 annually.

By contrast, a 2015-16 report from the American Association of University Professors (AAUP) found the average salary of a tenured professor at a public college to be $78,762. Another AAUP report, however, indicated a sharp decline in tenured instructors. “[O]ver the past four decades, the proportion of…full-time tenured positions has declined by 26 percent and…full-time tenure-track positions has dropped by 50 percent.” Colleges heavily favor less expensive instructors, especially part-time adjunct professors or graduate students. The AAUP stated that, as of 2011, adjunct and part-timers composed 70 percent of college faculties. Adjuncts typically earn between $20,000 and $25,000 annually and have few to no benefits. They are widely considered to be less qualified and less committed than their tenured counterparts, which further deprives students of quality education.

An Example of Administrative Bloat

Data can obscure the sense of the human cost of bloat. Consider an example.

In June 2016, UMass-Boston notified nearly 400 adjunct instructors that their jobs could be eliminated; the instructors constituted 30 percent of the faculty. In April 2017, a WGBH News headline declared “Administrative Bloat Victimizes Students At UMass – And Everywhere.” Harvey Silverglate of the Foundation for Individual Rights in Education explained that administrators were “seeking to balance the school’s budget by eliminating ‘at least 20 courses…taught this summer, and more next fall’.” Silverglate called this “perfectly predictable since the cuts are being made by administrators, not academics.” Some classes may have been necessary for students to graduate.

Silverglate added, “UMass is hardly an outlier. Nationally, adjuncts have been replacing tenured faculty at a rate that threatens the heart of the educational system.”

An Under-Discussed Problem with College Administrations

All institutions need administration. But the bureaucratic nature and ideological bent of many college administrations is damaging academic freedom and flow of ideas that learning requires. Again, this is particularly true of policies based on identity politics. An example is the censorship of ideas, words, and attitudes that are deemed “offensive.” In practice, whatever subjectively offends “marginalized” students is censored without regard to the impact on the others.

Professors are not exempt, as the progressive Bret Weinstein recently discovered at Evergreen State College. Weinstein was waylaid in his classroom by a mob of screaming students because he objected to a student campaign to exclude whites from campus for a day. He called it racist. This offended the organizers. Weinstein was subsequently forced to teach his class in a park because he was not safe on campus. The college President declined to suspend Weinstein but agreed to comply with most other demands put forth by the outraged students, whom he called “courageous.”

Dissenting students fare no better and often retreat into silence for self-protection.

Because of “offended” students, works of classical literature by white males are discarded. Some law schools no longer teach about rape. Less than one third of top colleges require history majors to take a single course in American history because it is considered racist. Students are being denied exposure to necessary ideas.

Administrative bloat also crowds out core university functions. Because of administrative bloat, class sizes swell. Universities have innovated to cut corners instead of improve education. They turn to online courses and competency-based education, where students teach themselves and prove their mastery of the material, to cope with shrinking faculty numbers. Students are denied the guidance and mentorship of committed educators.

Administrative bloat is directly opposed to academic excellence and the intellectual well-being of students.

War of the Genders