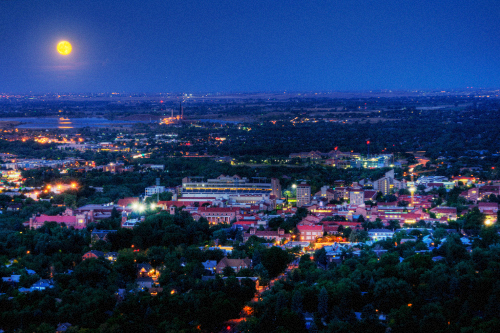 A little over four years ago the University of Colorado, Boulder began a three-year pilot program that I believe has no precedent in American higher education. With the help of private donors, and the support of the university’s board, president, and chancellor, the school created the position of Visiting Scholar of Conservative Thought and Policy.

According to its supporters, the chair’s purpose is to advance that type of diversity—political and ideological diversity—that seems a natural fit for a public academic institution that has the motto, “Let Your Light Shine.”

With its fifth year beginning in the fall of 2017, it is safe to say that this is no longer a pilot program, but a permanent fixture of the university. I was honored to have served as the 2016-17 occupant of the chair, which is a full-time faculty appointment with a regular 2-2 course load.

With all my grades now turned in, I’d like to offer some reflections on my time in Boulder.

Having taught full-time for seven years at a large public university (UNLV, 1989-1996), I was delighted to be returning to a similar sort of institution. I look back fondly on those UNLV days because, as one of the few self-identified conservatives on campus, I felt I had a special obligation to represent my tribe with not only careful scholarship and good teaching, but with a public persona that exuded the joy that was in my heart. I really love being a professor, and that has nothing to do with my politics.

I found myself with the same sense of mission and determination when my wife and I arrived in Boulder last August.

In the fall, I team-taught the course “Thomas Aquinas” with philosophy professor Robert Pasnau, one of the world’s leading Aquinas scholars. As I told Bob when he invited me to team-teach with him, “You know, you’re the Aquinas scholar; I’m just the Thomist.” He responded, “But you have skin in the game.”

The class went marvelously. I lectured on the aspects of Aquinas’ philosophy I knew best and that I’ve taught before—on God and the nature of law—while Bob focused on Aquinas’ views on human nature, free will, and right and wrong action.

The other fall course I taught was “Philosophy and Religion” (which I also taught in the spring). Offered in the philosophy department, this course dealt with philosophical issues in religion, such as the concept and existence of God, the relationship between faith and reason, miracles, God and ethics, and the problem of evil.

Because I do not often teach this at Baylor, it was exciting to get back to those issues that originally drew me to philosophy. What amazed me was how interested the students were on the topics we covered in class, especially in comparison to my Baylor students, virtually all of whom would identify themselves as serious Christians. My guess is that because CU is a public university—and thus unlike Baylor does not require its students to attend chapel and take six credits of theology in order to graduate—the issues we discussed were new to many of my students.

Of all my CU classes, this one had the most enthusiastic participants.

Although there were many interesting exchanges, one in particular stands out. It involved the case of Burwell v. Hobby Lobby Stores. While I was trying to delicately explain to the students the four types of birth control to which Hobby Lobby objected and that the Secretary of Health and Human Services had mandated the company purchase for employees who wanted them, a young lady in the front row raised her hand and interceded.

After announcing to the class that she was at that very moment wearing an IUD—one of the birth control methods in question—she proceeded to explain precisely how it functioned. While she was speaking, I began to consider what I should say in response to her personal disclosure.

I concluded that I should say nothing except, “Thank you,” and then go on to ask if any other students wanted to contribute to the discussion. For I thought to myself, “What if it were the other way around? What if I were a very liberal, perhaps irreligious, professor, and one of my students—let’s say, a devout Evangelical Christian—boldly announced his personal faith to the class and went on to explain the theological reasons why his brethren at Hobby Lobby hold the views that they do?

Would it be right for me to respond by saying, “Sorry, that’s too much information”?

The answer is obvious. If you want a classroom where students can speak freely about the topics under discussion—a place in which we can with integrity assess dangerous ideas—then you cannot be a helicopter professor, whether you’re a liberal, conservative, or something in-between.

Three days after the final exam, I was so pleased to receive this message from one of the students in that class: “I have never seen a class in which the students spoke more freely. They (we) truly felt their ideas were welcomed and matter.”

In addition to teaching, the visiting scholar’s position comes with other responsibilities: (1) inviting guest speakers to campus, and (2) accepting as many invitations as possible to speak to local civic, political, and religious groups.

Concerning the first, I decided to invite speakers who touched on cultural themes that are rarely entertained in a serious fashion by the popular conservative television-radio media complex (which, for most people, especially in the academy, represents the essence of conservatism).

So, in the fall I brought George Yancey (University of North Texas) and Patrick Deneen (University of Notre Dame) to campus. Yancey spoke on “Conservatives in Academia: Is There Bias Against Them?,” while Deneen gave a talk on “The End of Liberalism: Why the World is Falling Apart.”

In the spring, the university hosted lectures by Elizabeth Corey (Baylor University), who spoke on “Can Conservatives Support Diversity?,” and author Rod Dreher, who discussed his New York Times bestseller, The Benedict Option.

I am happy to report that the lectures were well-attended and that there were none of the disturbances or protests that we’ve seen on other campuses throughout the U.S. over the past few years. Audience members asked probing questions, but they were clearly offered in a spirit of inquiry and truth-seeking, even when it was obvious that the questioner strongly disagreed with the speaker. That’s the sort of critical dialogue that many of us—regardless of our political views—believe to be integral to university life.

As for local talks, I gave plenty of them, most often about our fundamental freedoms and why everyone should defend them.

What became my standard “stump speech” focused on the growing indifference to the attacks on freedom of speech, association, and religion in the wider culture, but especially on our college campuses. As far as I could tell, my message was well received, even by many listeners who do not identify as conservative or libertarian.

I believe the main reason for this is that I framed this talk as a defense of what I like to call “rock-ribbed liberalism,” about which I have written elsewhere: “I miss liberalism. Real liberalism. Not this namby-pamby, afraid-of-your-own-shadow faint-hearted liberalism. What I miss is the rock-ribbed, truth-seeking, justice-pursuing, rights-defending, I-don’t-agree-with-you-but-I’ll-defend-your-right-to-say-it liberalism. It was the liberalism that defeated Nazism and Communism. It was your daddy’s liberalism….”

This approach resonated with a lot of people.

From what I could gather, and from my numerous conversations on campus, the administration, faculty, and staff are generally supportive of the visiting scholar program. Although there is no doubt that CU, like virtually all public universities, is overwhelmingly liberal in its political composition, I never felt unwelcome or out of place. For me, it was almost as if the campus was whispering in my ear, “Let your light shine.”

Let Your Light Shine: My Year As the Visiting Scholar of Conservative Thought at the University of Colorado