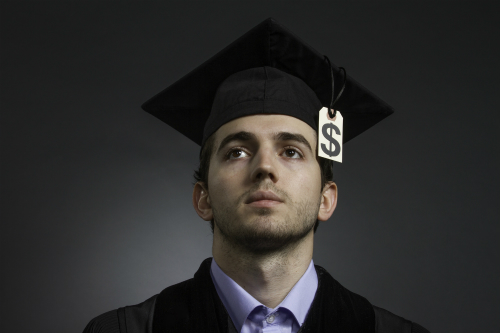 American college students have taken to saying that they need “safe spaces” on campus. They really don’t, since all they’re after is “safety” from ideas they dislike. But if they were thinking ahead to life after graduation, many might wonder if they’ll need a safe space when the bills for their college loans start coming due.

Much as they may want one, there won’t be any such haven. Bad borrowing decisions cannot be escaped.

Nearly six years ago, the Pope Center published an article by a graduate of Northeastern University, Kelli Space, who had earned her B.A. with a major in sociology—at the cost of a student debt total in excess of $200,000. She wrote plaintively, “Looking back I wish someone had brought me back down to Earth by asking the right questions: What is ‘good debt’ to an 18-year-old? Do you have any idea what the cost of repaying your loans will be? How will those payments compare with your anticipated income?”

The problem of students blindly borrowing large amounts they will struggle to repay in search of college credentials (frequently of questionable value) remains unsolved.

A recent case even more shocking than Kelli Space’s is that of Liz Kelley, who is more than $410,000 in debt to the government for her student loans, as we learn in this New York Times piece by Kevin Carey. She first borrowed for her education degree at Maryville University, but when no teaching job opened up for her, she decided to go on for another degree in a shrinking field—law.

By continuing her education, Liz was able to put her loan payments on hold. She borrowed more for law school, but was able to complete only one year before dropping out for medical reasons. She’s had little work and can’t make any headway against her huge and steadily mounting debt balance.

Carey puts his finger on the essence of the problem that lures so many American students into the debt trap. “Our culture encourages trust in college. When people walk onto a used car lot, they understand that promises of easy credit are just another trick for a slick salesman to close a deal. The local university and the Department of Education, by contrast, are assumed to have students’ best interests in mind.”

It isn’t only students like Kelli and Liz, who over-borrowed but at least completed their degrees, who are harmed by that “trust the educators” culture. More numerous are those who borrowed modestly but never earned a degree at all.

In her recent book Student Debt: Rhetoric and Realities of Higher Education Financing, economics professor Sandy Baum writes, “It is not borrowers with high levels of debt—most of whom have graduate degrees and few of whom have less than a bachelor’s degree—who are really struggling with debt. Rather, it is those who borrowed relatively small amounts but did not emerge with educational credentials of value in the labor market.”

Many of those hapless students were mismatched at even the low-demand schools where they enrolled. Poorly prepared for anything like college-level work and often lacking in discipline and motivation, they were wasting their time and money on college. As Baum writes, “The fundamental question is why the government made these loans in the first place.”

Yes, that is the question and the answer is that government officials, unlike private lenders who stand to lose money if they make bad lending decisions, will not suffer any adverse consequences from their extremely lax college lending. Federal loans are virtually an entitlement and the official stance of the Department of Education under President Obama has been that the national interest is served getting as many young people into and through college as possible. Student loan defaults are of minimal concern to them.

Still, the government has made two efforts in recent years toward helping students with college financing. Both, however, are so feeble that one might think of them as mere window dressing.

One is the requirement that colleges have a “net price calculator” feature on their websites, so that students can get an idea of what pursuing an education there will cost. Not surprisingly, however, colleges are not eager to help prospective customers assess the cost of attendance and compare it to their competitors. Most make their “calculators” hard to find and use.

Then there is the federal mandate that schools provide debt counseling for students who plan to take out government loans. These counseling sessions may be done in person, but usually they’re done online. They are formalistic and, crucially, take place only after the student has decided to enroll.

Heather Jarvis, an attorney who specializes in student loan matters, is quoted in this Consumer Reports article that “Counseling is not personalized in a way that makes sense or is useful.” Naturally. The last thing a college wants at that point is for a student to reconsider the wisdom of attending from a cost versus benefit angle.

Furthermore, this counseling is not supposed to deter students from borrowing. In the same Consumer Reports article, Betsy Mayotte, director of consumer outreach at the non-profit organization American Student Assistance says, “The government and universities aren’t allowed to say you can’t borrow money because they think it’s too much.”

Honest counseling would entail assessing a student’s academic abilities and educational prospects, but instead all the government wants to do is to accentuate the positive. That is of no help to the large numbers of students who should be told that the cost of their education (whether or not it entails borrowing) may exceed the likely benefits.

Real counseling might, for example, have dissuaded the young man who was intent on a career as an organic farmer (where he earns only $12,000 per year after taxes) from borrowing to earn a degree from pricey Wesleyan University. (Read about that and other similar stories in this piece.)

Despite the “net price calculators” and so-called debt counseling, many students remain remarkably ignorant about their debt obligations. In their 2014 Brookings paper “Are College Students Borrowing Blindly?” Beth Akers and Matthew Chingos answer that many are. Akers and Chingos find that slightly more than half of student borrowers are badly misinformed about their repayment obligations. What’s even more remarkable is that some are not even aware that they have any student loan debt.

The U.S. has many organizations (such as Student Loan Ranger) that will help students get out of the debts they have agreed, however mistakenly or foolishly, to repay. What it does not have is anything to help them avoid bad debt decisions in the first place.

That should be something for the Trump Education Department to explore. The new administration should abandon the “college for all” mindset that has done so much to make young Americans believe that college is the way to succeed and that borrowing to afford it is “good debt.”

It isn’t possible for the feds either to provide or insist upon real counseling for students considering college. (High school counselors should do that, but sadly they’ve mostly bought the “college for all” line and hesitate to advise students against it.) What the government could do, however, would be to put something equivalent to the Surgeon General’s warning about cigarettes on all its loans.

That “warning” would refer prospective borrowers to facts showing that college is not always a good use of time and money. Students should be encouraged to ponder the high rates of underemployment among recent graduates, loan default rates, and postsecondary options other than college that may give them better results at lower cost. They might be told to read over something like this pro and con treatment before choosing.

For several years, the number of students borrowing to begin college has been falling, which suggests that the message that college isn’t a good idea for everyone is slowly filtering through the country. The government, however, should do more to make students aware that college debt can be hazardous.