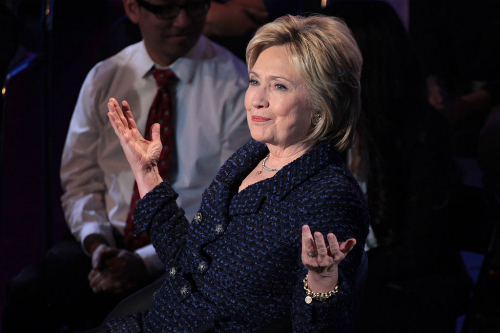 Seemingly, nothing now stands between Hillary Clinton and the Democratic nomination, so it’s worth looking anew at her proposals regarding higher education.

Back in May, Professor Gary Wolfram critiqued the ideas Clinton had been pushing, but recently she advanced some new proposals that go beyond her earlier ones.

During her primary fight with Senator Bernie Sanders, Clinton argued that his “free college” promise went too far. She merely advocated that students should be able to graduate “free of debt.”

Now, however, Clinton has come out with a plan to make public colleges and universities free for families with earnings less than $125,000 annually by 2021.

Looking into the details, however, we find that “free” college won’t come about by presidential decree (the states are not vassals of the president) but would depend on state governments going along with her scheme whereby the federal government would pay them if they cooperate by charging no tuition to students from qualifying “poor” families.

It’s impossible to say if all or even some states would go along. President Obama assumed that most if not all states would establish their own health insurance exchanges under the Affordable Care Act, but most did not. This could prove to be similar. Clinton’s plan to get the states to make their colleges and universities “free”  might sweep across the nation—but it might also be confined to only a few “blue” states.

Suppose a state decides to adopt Clinton’s free college plan. What would the consequences be?

First, some students who previously concluded that the cost of college (even at the already highly subsidized public institutions) was greater than the expected benefits would now decide differently and choose to enroll. Even though most students and their families don’t try to do a precise cost/benefit analysis on going to college, if tuition were suddenly reduced to zero, that would certainly induce some to say, “Now it’s worth a try.”

That would mean at least a modest increase in enrollment, but it would come mainly from the most academically marginal students. The colleges and universities that gained in those enrollments would also find they need to increase remedial programs. Even so, drawing in more academically weak students will mean an increasing dropout rate, a metric that schools fear because it hurts their rankings.

In other words, drawing in more students is a mixed blessing.

Another adverse result from making college tuition free would be that many students would devote less effort to their courses. Humans have a tendency to put more of themselves—to feel more “invested”—when they have to pay for education (or any other good or service) than when they don’t.

Federal Reserve Bank of New York economist Aysegul Sahin found evidence for that common sense belief when she studied the effort college students put into their work in a 2004 paper “The Incentive Effects of Higher Education Subsidies on Student Effort.” She concluded, “Low-tuition, high-subsidy policies cause an increase in the ratio of less highly-motivated students among the college graduates and that even highly-motivated ones respond to lower tuition by choosing to study less.”

Therefore, while the Clinton plan might “produce” more college graduates, it would probably reduce the overall level of learning. This is another of those cases where government action leads to visible benefits but at the expense of greater but hidden costs.

One more effect of the plan would probably be increased federal control over state university systems. With a greatly increased inflow of federal dollars into those systems, U.S. Department of Education officials and Congress itself (particularly if the Democrats have control) would have more leverage than ever to dictate policy and perhaps curriculum. The prospect of further loss of control over “their” university systems could be enough to cause some governors to say “no thanks” to the Clinton proposal.

Finally, how would this plan affect private colleges and universities? Many small schools already find it hard to stay afloat and if any appreciable number of students who might have enrolled in them instead decide that attending a state university free of tuition is a better deal, they’ll be in much greater peril. We would probably then get still another federal program to help save the endangered private schools.

Clinton also advanced new ideas about the financing of college. Students who already have taken out federal loans would be given a three-month moratorium on their payments. During that time, they could refinance to lower their monthly payments. Clinton declared that she wants “everyone to be able to refinance your student loans so you never have to pay more than you can afford.”

That’s rhetoric many will find appealing, but the fact is that many who have college loans can’t afford to pay them at all. Refinancing is of little or no help to them.

Moreover, there is an obvious fairness problem with the moratorium proposal. As Andrew Kelly observes in this article, “it’s not clear how granting a moratorium for borrowers who are repaying their loans will help those who are struggling to do so (or are not doing so at all). If the idea here is similar to a tax holiday, where taxpayers with back taxes can get square without facing prosecution, then why have a moratorium for other payers?”

Why indeed? Perhaps the motive behind this proposed moratorium is to garner as many grateful votes as possible.

Lastly, Mrs. Clinton has released a new loan forgiveness idea. As part of her Initiative on Technology and Innovation, she wants to allow budding entrepreneurs to defer payments on their student loans for up to three years, along with “their first 10 or 20 employees.”

This idea is obviously crafted to appeal to tech-savvy young people, but it’s another instance of misusing educational policy to advance an economic objective.

Some young people certainly have tried founding businesses shortly after graduating from college and a few have been notably successful. But this plan won’t inspire more entrepreneurship. All it would do is to give a small subsidy at taxpayer expense to those who give entrepreneurship a shot.

Manhattan Institute analyst Preston Cooper points out the glaring problem with this proposal. “Entrepreneurs are certainly an important part of our economy, but entrepreneurship is not for everyone, nor should it be…. Privileging one career path over others through financial incentives such as loan deferment distorts the allocation of human capital and may lead some to make career decisions they would not have otherwise.”

Entrepreneurship is far more vital than Clinton realizes; if she really wanted to promote it, the way to go about that would be to remove federal regulatory burdens that impede people from beginning new businesses. (To my knowledge, widespread deregulation will not be part of the Democratic platform.) Gifting back to entrepreneurs (at taxpayer expense) a small percentage of the cost of having gone to college will not jump-start business startups in our increasingly business-unfriendly economy.

And why should individuals who happen to land jobs in startup firms get breaks on their student loans while others with loan debts don’t? That makes sense only as a political ploy.

Topping this proposal off, Clinton would forgive (again, at taxpayer expense) student loans up to $17,500 if the entrepreneur starts a business that operates in a “distressed community” or qualifies as a “social enterprise” with “measurable social impact and benefit.”

That would result in a back-door federal subsidy for a few favored college grads pursuing “enterprises” that progressive politicians and bureaucrats like. And just imagine the reams of paper that would go into the new regulations federal bureaucrats would have to write to cover these new policies.

There’s never been any doubt that a Clinton administration would mean more federal intervention in higher education. These new campaign proposals show how much further the Democratic nominee will go to keep the higher education bubble inflated.