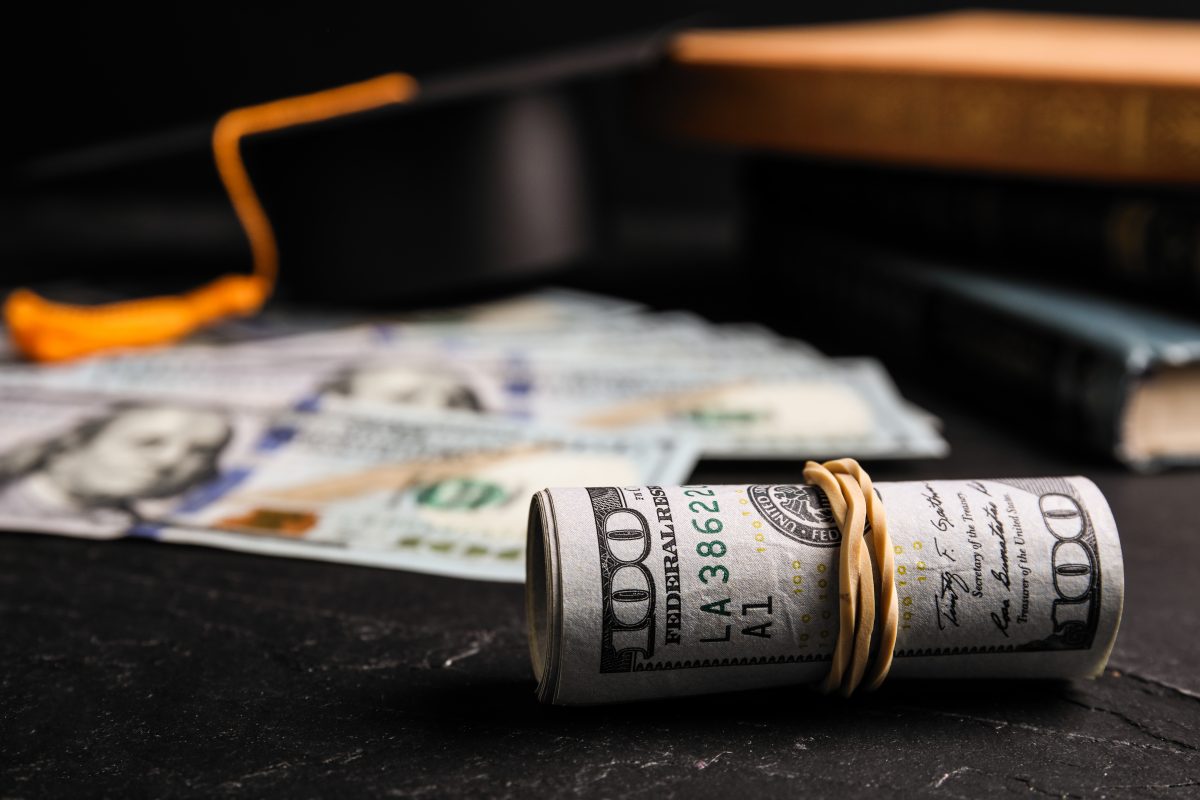 The College Scorecard, a Department of Education initiative that publishes data on student debt and earnings after graduation for thousands of schools, just got a major update. Previously, the Scorecard’s major shortcoming was that it only reported data at the institution level—so we could see how much a typical graduate from the University of North Carolina-Chapel Hill earns, but not how much an engineering major earns relative to an education major.

Since the payoff of a college education varies wildly by field of study, the usefulness of this dataset to students was limited.

No longer. Last Wednesday, the Department unveiled a new edition of the Scorecard which allows prospective students to view these outcomes data by both institution and program. The updated Scorecard publishes a dashboard geared toward prospective students, as well as comprehensive files to help researchers and journalists analyze the data en masse. The data includes median student debt and median earnings after graduation for some 41,000 programs.

While the data have limitations—debt and earnings figures are suppressed for small programs due to privacy concerns, and the earnings data only reflects the first year of student income after graduation—the new Scorecard will do much to advance our knowledge of student debt and earnings across tens of thousands of educational programs.

For instance, in the average bachelor’s degree program, students leave school with a debt burden equal to about 80 percent of their salary in the first year after graduating college. 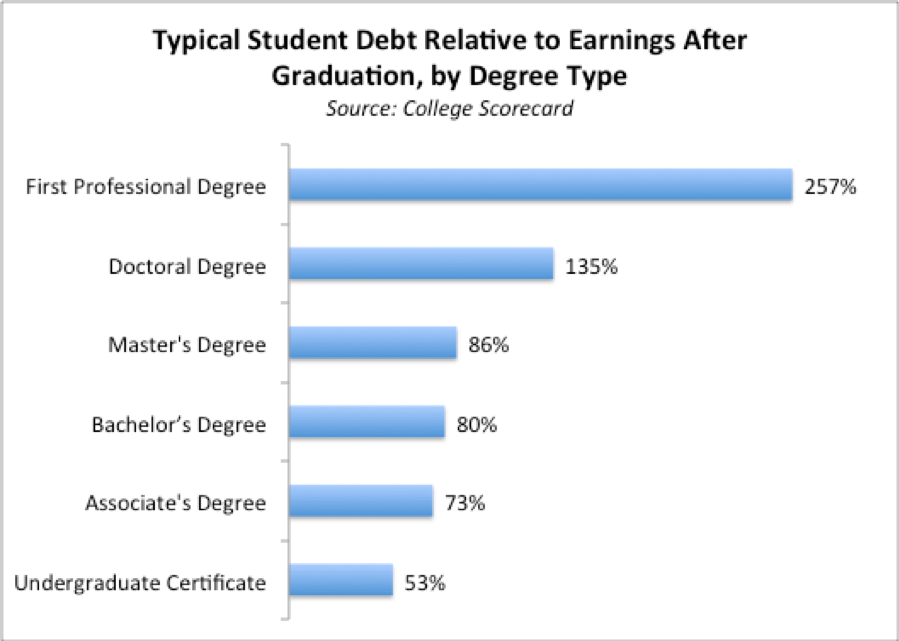 Most undergraduates can expect to earn more than they owe after leaving school. Partially, this situation is thanks to the federal government capping its loans to undergraduates; a dependent student pursuing a bachelor’s degree can borrow no more than $31,000. For this reason, median student debt varies little across undergraduate programs. At UNC-Chapel Hill, for instance, the median student in almost all majors with data available has a debt burden below $20,000, and no major incurs debt above $23,000. 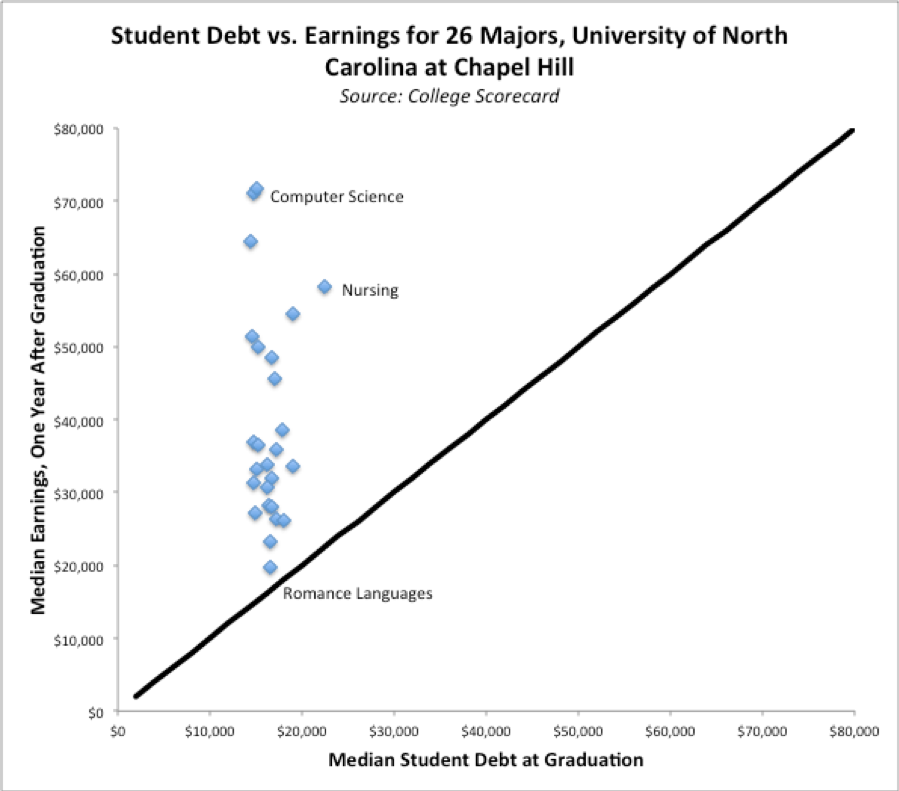 But debt-to-earnings ratios vary substantially across college majors because the median earnings by major are so different.

At UNC-Chapel Hill, the median graduate in computer science earns $71,000 after graduation, easily enough to repay a median loan balance of $14,691. At the other end of the spectrum, the median student who majors in one of the Romance languages earns just $19,800 after graduation. His outstanding debt of $16,558 is almost equal to his starting salary.

For students worried about their ability to pay back their loans, it is difficult to overstate the importance of choosing a major. At UNC-Chapel Hill, debt-to-earnings ratios vary from an easily manageable 21 percent in computer science to 84 percent in the Romance languages.

For those students without the technological chops to major in computer science, other majors still yield a respectable first-year salary relative to the debt incurred. These include economics (with a debt-to-earnings ratio of 30 percent), human resources management (37 percent), nursing (39 percent), and even political science (48 percent).

The story becomes more complicated at the graduate level, where there is no cap on federal student loans. Students can borrow up to the cost of attendance, as defined by the institution, which effectively means that federal loans to graduate students are unlimited. Such lax lending standards—coupled with income-based repayment programs that promise generous student loan forgiveness for high-balance borrowers—have caused some truly eye-popping prices for certain graduate programs.

Credentials such as law and medicine incur extremely high debt-to-earnings ratios; the average ratio for these degrees is 257 percent. In other words, the median doctor or lawyer has student debt equal to over two and a half times his starting salary. Medical residencies probably account for low earnings relative to debt burdens for newly minted doctors, but it’s harder to explain away such high debt-to-earnings ratios for law graduates.

A handful of law schools (mostly elite ones such as Harvard and Penn) have debt-to-earnings ratios below 100 percent. But most lawyers owe far more in student debt than they earn in the first year after graduating law school.

Graduates of some law programs, such as American University, Howard University, and a number of for-profit schools, owe three or more times what they earn. While it’s possible that their earnings will go up in future years, the first-year statistics don’t look pretty.

Even at the master’s level, debt-to-earnings ratios can be extremely high. As for undergraduates, field of study matters enormously.

For instance, the 30 master’s degree programs in general computer and information sciences in the Scorecard dataset have a median debt-to-earnings ratio of 49 percent. Those programs all have a respectable payoff: No master’s degree in computer and information sciences has median earnings below $50,000, and the most lucrative (the University of California-Los Angeles) returns median earnings of $122,000.

Contrast computer and information sciences with one of the worst master’s degrees for graduate earnings: film and photographic arts. Even the best master’s program in film yields median earnings of just $36,000. What’s more, there is little correlation between an institution’s brand name and the earning power of its film degrees. Even at the Ivy League’s Columbia University, median earnings for the master’s in film are just $25,400. 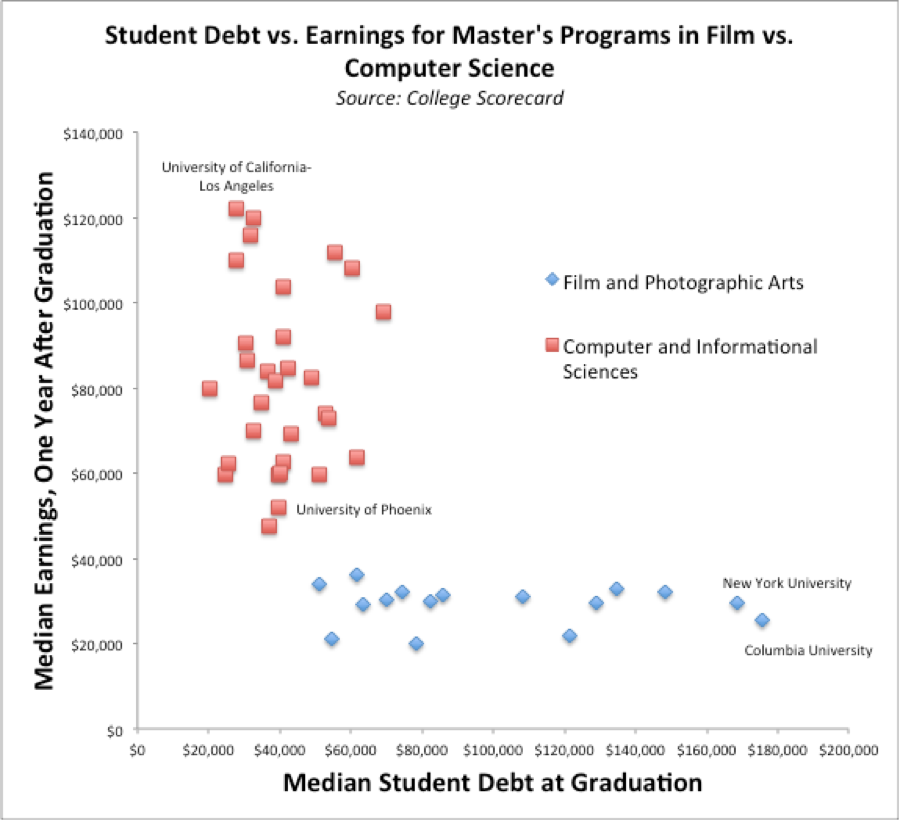 But the true scandal for master’s degrees in film is the debt that students take on. Every single film program in the Scorecard has a debt-to-earnings ratio of 150 percent or higher.

At New York City’s esteemed private universities, Columbia University and New York University, the median film student takes on over $150,000 in federal student loans. At Columbia, the debt-to-earnings ratio for the master’s degree in film is—and this is not a typo—690 percent. In other words, students graduating in that program can expect to owe nearly seven times what they earn in the first year after graduation.

Such egregious debt-to-earnings ratios ought to convince Congress that it’s time to place some commonsense caps on federal loans to graduate students. There is truly no excuse for taxpayers to continue to finance programs that cost so much, with such an abysmal earnings payoff.

While it’s wrong for the government to allow students to take on such astronomical debt burdens, taxpayers are also likely to take a hit, since the promise of loan forgiveness for high-balance borrowers will fall on the federal government’s shoulders.

Barring Congressional action, the release of the new Scorecard data will also allow the fourth branch of government to do its job. Journalists and policy analysts can use the data to “name and shame” programs with outrageous debt-to-earnings ratios, such as the master’s in film at Columbia.

A recent study found that the 2017 release of program-level data on for-profit colleges drove institutions to close hundreds of poorly performing programs. Perhaps now that the Department has aired nonprofit institutions’ dirty laundry, the embarrassment will lead some schools to scuttle their lowest-return degrees.

If nothing else, that will validate the countless hours the Department has invested in developing the updated Scorecard dataset. Transparency is a powerful tool to discipline the higher education marketplace and improve outcomes for students and taxpayers, so it’s heartening to see the Department deploy it. Let’s hope various stakeholders—students, institutions, journalists, and policymakers—will take advantage of this new information.

Preston Cooper is a higher education analyst and a PhD student at George Mason University.