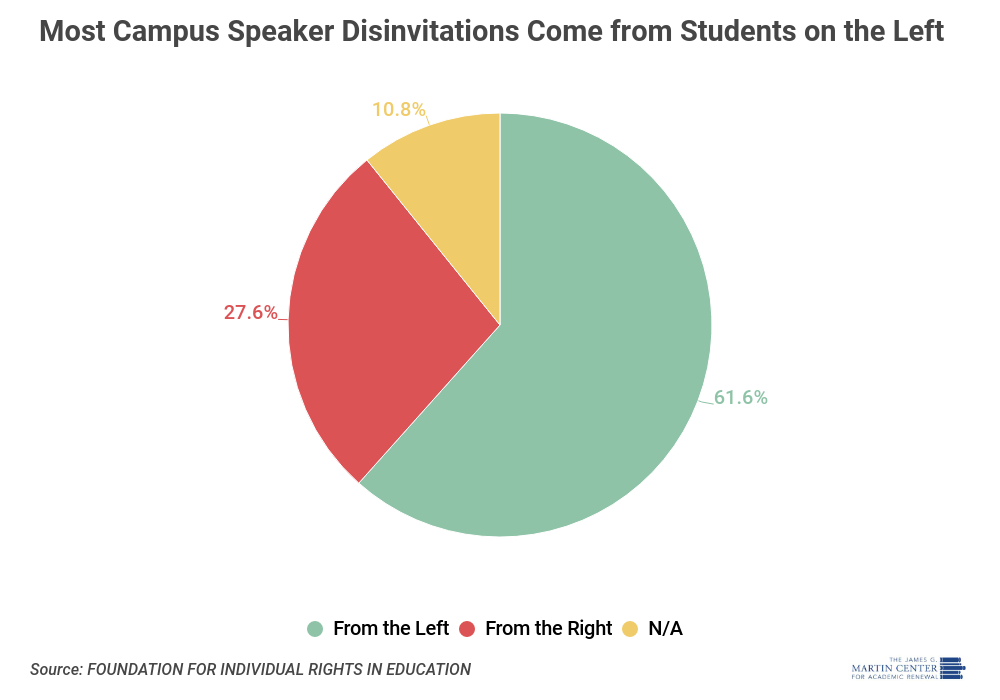 Americans celebrate their independence today, but liberty is still threatened in higher education. As college campuses become a battleground over free speech, disinviting speakers has been a common tactic across the country to control what can be said. What is surprising, however, is just how many of these disinvitations come from left-wing student groups. Since 1998, the Foundation for Individual Rights in Education (FIRE) has tracked disinvitations of campus speakers, along with the groups responsible for disinviting them.

Data from FIRE show that left-wing student groups are responsible for more than twice the amount of speaker disinvitations (61.6 percent) as compared to right-wing student groups (27.6 percent). Sadly, this troubling statistic is consistent with the current attitude held by many students on the left toward free speech. Students attempt to shut down or silence speakers whose views challenge their own.

Left-leaning students are not the only ones who try to stifle speech, either. While the majority of speaker protests and disinvitations come from the left, right-wing student groups are responsible for many disinvitations and protests as well (36 since 2014). Groups on both sides of the political spectrum should demonstrate their commitment to true intellectual diversity by not preventing speakers from visiting their campuses. Students should be taught to carefully listen and consider all ideas for a truly liberal education, not just those that pass an ideological litmus test.

David Waugh is a Martin Center intern. He is currently a student at Hampden-Sydney College, where he is majoring in economics. He is from Chapel Hill, North Carolina. In his free time, he enjoys reading about political economy and philosophy, running, and spending time with friends and family.