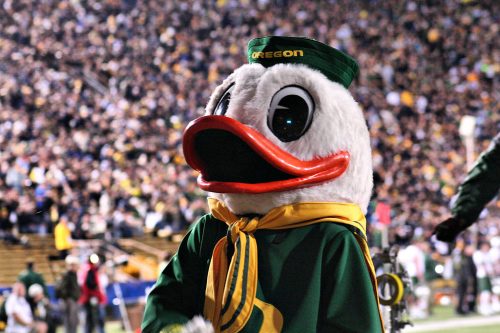 While money is not the root of all evil, it is undeniably responsible for the transformation of the University of Oregon (UO). It changed from a typical state flagship where athletics were a nice diversion for some students and alums into a sports powerhouse where the quest for glory in football and basketball dominates the school.

The person directly responsible for that is Phil Knight, the founder of the athletic shoe and apparel giant Nike.  At a time when the university’s president was desperately looking for outside funding for the school, Knight, an Oregon alum and huge athletics booster, was on hand to help with funds for projects he liked.

Is it a bad thing for an alum to give money? In his recent book University of Nike, author Joshua Hunt shows how Oregon became so hooked on money from Knight that it has allowed athletics to badly distort its priorities. The university’s success on the gridiron and court was crucial to Nike’s business strategy of selling not just shoes, but an entire “dream” package for Americans who were caught up in football and basketball. Once the school started taking Nike money, it simply couldn’t stop.

Hunt’s book is worthwhile—a cautionary tale for college officials to avoid the siren song of corporate money targeted at big sports. Unfortunately, his analysis of the problem is not entirely accurate, and he doesn’t offer any advice to university leaders who might want to keep from becoming another University of Nike.

Although Phil Knight is the villain of the book, Hunt believes that the real devil was an Oregon tax-limitation activist named Don McIntire. In 1990, McIntire was the driving force behind a tax limitation initiative that voters approved. That property tax cut, Hunt writes, forced the state to “abandon” its public university system because it pitted K-12 schools against universities for state funding. According to Hunt, a former Reuters reporter who wears his leftism on his sleeve, “The University of Oregon would need to look elsewhere for funding if it were to survive.”

Following the 1990 tax cut, the seven schools in the state university system did have to make do with smaller appropriations, but their survival was never in doubt. In-state tuition was raised and the schools increased efforts at recruiting students from other states, who would pay much higher tuition than Oregon residents. At UO, president Dave Frohnmayer started looking hard for outside funding. By 1994, he had succeeded in landing almost $100 million in donations from an array of relatively small donors.

We can’t know what would have happened at UO if Phil Knight had never opened up his checkbook, but UO certainly would have adjusted to the leaner financial circumstances just as Oregon State, Portland State, and other campuses in the system did. What Hunt doesn’t grasp is that college leaders will always spend as much money as they possibly can, much of it on non-essentials meant to raise the school’s prestige. (On that, professor Robert Martin’s paper “The Revenue-to-Cost Spiral in Higher Education” is key reading.) They’ll complain loudly about any funding cuts, but like households or businesses facing tighter spending constraints, they adjust by cutting back on the least important things.

But once Phil Knight started offering Frohnmayer huge amounts for various campus improvements, UO’s direction was severely altered.  It began innocently in 1994 with $27 million to renovate and expand the university’s library, which would be renamed for him. Soon afterward, Knight turned his attention to big “investments” in athletics.

First, after the university’s athletics department convinced him that the school just couldn’t compete for the most talented football players unless it had an indoor practice facility, Knight put up millions to construct one, the Moshofsky Center. But the money didn’t come entirely from him (i.e., Nike)—his funding had to be matched by other sources that included state bonds, higher tuition, increased student fees, and other donations. The Moshofsky Center marked a major turn toward making UO a sports-dominated school.

After the Moshofsky Center, Knight put another huge chunk of money on the table to renovate UO’s rather antiquated football stadium (by the standards of the then-Pac-10 Conference, at least). Again, his funds had to be matched, so the cost of making the stadium up-to-date, complete with luxury sky-boxes, fell in part on students, taxpayers, and others who weren’t interested in whether the Ducks (as Oregon’s teams are known) won or lost. Too bad for them.

On campus, athletes were treated almost like royalty. With Nike money, UO built a stunning facility just for them, called the John E. Jaqua Center for Student Athletes. Hunt describes it as follows:

The center is perched in the middle of a shallow moat, with stone walkways leading to its glass façade, which makes it look like an Apple store from which the tech company’s logo has ripened and fallen away. Inside, student-athletes can relax behind glass windows, made opaque with thin strips of brushed steel that hang across them like strands of tin spaghetti; they lounge on chairs and couches made from soft Italian leather that rest on white oak floors; glass elevators transport them to appointments with their own private tutors; and a café serves food and coffee to weary football and basketball players.

Of course, the Jaqua Center is only for players.

The special status of athletes is not limited to exclusive, luxurious surroundings. Hunt mentions their “tutors” and doubts that the academic help they provide doesn’t often amount to cheating, as was the case in the infamous UNC athletics scandal. He also notes that players accused of sexual assault have received special treatment so they can continue to play for the school and later transfer without any stain on their records. Similarly, star players who have records of sexual assault have nevertheless been recruited if coaches think they can help their teams win.

Having football and basketball teams that win has become paramount at UO. The enormous costs of that obsession are widely spread.

After the infusion of Knight money for athletics, UO’s football and basketball teams did improve, but, inevitably, other Pac-10 (now Pac-12) schools joined the arms race and evened things up. In the recently concluded football season, the Ducks were just 5-4 in conference play. The college sports arms race is extremely expensive and diverts schools from educational concerns, but nobody wins in the long run.

Missing in action throughout the years of rising Nike control of UO was any oversight from its governing body, the Oregon State Board of Higher Education. It would have been appropriate for that board (which was dissolved in 2015; each Oregon public university now has its own board of trustees) to have stepped in and told UO’s president that it did not approve of turning UO into a subsidiary of the Nike corporation. Apparently, however, that never happened. The book gives no hint of any pushback from the board. Probably it was just the typical rubber-stamp, do-nothing board that’s so common in higher education.

It would have been appropriate for that board to have stepped in and told UO’s president that it did not approve of turning UO into a subsidiary of the Nike corporation.

Leaders who can see the trouble with big sports are all too rare. Robert Maynard Hutchins took the University of Chicago out of the Big Ten back in 1939 because he could see that the quest for sports glory was incompatible with academic excellence. Unfortunately, most college leaders today seem to be easy marks for athletics directors who try to convince them that the path to increased prestige and bigger budgets is to field winning football and basketball teams. Equally unfortunately, the governing boards that are supposed to keep school leaders from making such disastrous mistakes are usually nothing more than potted plants.

Phil Knight and Nike are the main targets of Hunt’s book, but he tries to make a much wider indictment against “corporate cash” that “buys” American higher education. That’s far too sweeping, however. Outside funding (from corporations and ideological groups) can have good or bad effects. The problem is not with outside funds per se, but with college leaders who will grab at money from almost any source so long as it seems likely to enhance their own status.

Just because someone is employed as president of a state university doesn’t mean he will be led to do what is in the public interest. The big message of public choice economics is that officials, while paying lip service to the overall good, will usually do what is in their own interest. That’s why politicians so often go against their professed principles to support special interest bills and why the presidents of public universities (even in liberal states that fund higher education munificently, like California) will cut deals with big business.

To keep other schools from becoming Nike Universities—and that process is well underway at more than a few—we need better governance systems to rein in presidents before they get hooked on outside money.