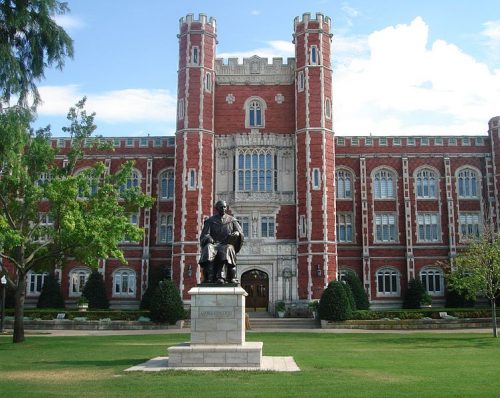 A strong executive with a proven track record, though lacking a typical background in academia, is selected as president of a large public research university in America’s heartland. Quickly identifying waste, inefficiency, and high overhead costs, he implements common-sense operating efficiencies to lower costs while freezing tuition for students. He casts a bold, innovative vision for the university’s future.

No, it’s not Purdue president Mitch Daniels. It’s the new president of the University of Oklahoma.

When widely admired OU president David Boren retired this year after nearly 24 years at the helm, the regents didn’t turn to a conventional candidate from the academy. Instead, they unanimously selected 65-year-old James Gallogly, an OU alumnus and highly successful corporate executive.

Gallogly [gal-uh-glee] spent 29 years as an executive, serving in leadership roles at Phillips Petroleum Company, as executive vice president of ConocoPhillips, and as president and CEO of Chevron Phillips Chemical. In 2009, he joined LyondellBasell as CEO while the multinational chemical giant was in Chapter 11 bankruptcy. “It was the second-largest bankruptcy in history, right behind General Motors,” Gallogly said.

He guided the company out of bankruptcy in under a year. By 2013 the company’s profits were $3.9 billion on revenues of $44 billion. “In the history of Wall Street,” Forbes reporter Nathan Vardi wrote in 2014, “there haven’t been too many moneymaking machines quite like LyondellBasell, which has seen its shares return 500% since it emerged from bankruptcy four years ago.” Said Deutsche Bank analyst David Begleiter: “They are the poster child for the renaissance of the U.S. chemical industry.”

“Jim Gallogly is a world-class, in-demand, transformative leader,” said Clay Bennett, chairman of OU’s board of regents. Bennett, who is also chairman and principal owner of the Oklahoma City Thunder, praised Gallogly as “a builder known for having strategic vision, for managing large and complex organizations, and for mentoring and inspiring great teams to achieve results.”

Gallogly wasted no time getting started. Even before he officially took the reins on July 1, he presided over the June 19 Board of Regents’ meeting and made it known that OU needed to “get our house in order.” He said the university is losing $36 million a year and total debt is approaching $1 billion at the Norman campus. As the state’s largest newspaper reported:

Gallogly said the focus will be on efficiencies and “putting money into the right places,” like faculty raises. Some dedicated younger faculty members haven’t received a raise in years, he said.

Other goals Gallogly noted are doubling research efforts at all three campuses, expanding OU’s presence in Tulsa, and making OU medical facilities the provider of choice in the state.

“I firmly believe that we can do all of these things at the same time—stem our losses, increase our efficiency, build cash while paying down debt, and launching our effort to make the University of Oklahoma one of the finest research institutions in our nation and a growth engine for the state of Oklahoma.”

“We will get efficient,” Gallogly said, and that could mean layoffs for non-teaching staff. “We have to pay attention to our costs and a lot of our costs are related to payroll.”

His first day in the office, Gallogly fired six high-ranking administrators before lunchtime. He announced an executive restructuring which reduced his number of direct reports by nearly a third. “When our university strives to be more efficient and cost-effective, college can remain within the reach of more students,” he said. “During this time of change, we will continue to focus on academic excellence, student success, employee engagement, and efficiency. These first steps are needed to help maintain current tuition levels and work toward faculty pay raises.”

The weeks that followed continued to bring refreshing change. As he studied OU’s budget, Gallogly said, he found “surprise after surprise,” including millions of dollars in expenses that were not “properly accounted for.”

He began asking some hard questions. Why do the personal computers at OU cost double the amount of PCs he used at a private company? Is it the best use of resources to send petroleum-engineering majors to Brazil on a study-abroad program? Does OU need a fleet of 450 vehicles? Why does the university use paper time-sheets for employees?

“We have found very, very significant opportunities to save money,” Gallogly said in September. Much like Mitch Daniels, who once said “this place was not built to be efficient,” Gallogly discovered that OU is “highly inefficient. The way this university runs, it’s stunning compared to private enterprise.”

Gallogly has repeatedly emphasized the need for responsible stewardship of resources. “We will not have waste on campus,” he promised state lawmakers. That’s important for donors, too—including the new president himself (OU’s Gallogly College of Engineering is named for him).

“We’ve spent a lot of time in the past complaining about the amount of money that our state hasn’t given us,” he said. “I’m going to change that dialogue.”

Gallogly does want higher education appropriations to increase, but he believes he first must earn lawmakers’ confidence. He understands that subsidizing higher education is not the highest priority (to say the least) of Oklahoma voters and their elected representatives. In part, that’s because fully 82 percent of voters believe our colleges and universities could be run more efficiently.

But, of course, efficiency is merely a necessary first step, not an end unto itself. His first morning on the job at LyondellBasell, Gallogly told employees on a worldwide conference call: “I did not come to help you get out of bankruptcy. We will do that, but that’s not why I’m here. I’m here to make LyondellBasell the number one petrochemical company in the world.”

Will he likewise be a “transformative leader” in Norman? The early signs are promising.

Brandon Dutcher is senior vice president at the Oklahoma Council of Public Affairs, a free-market think tank in Oklahoma City.

In Oklahoma, a ‘Transformative Leader’ Brings New Vision to University