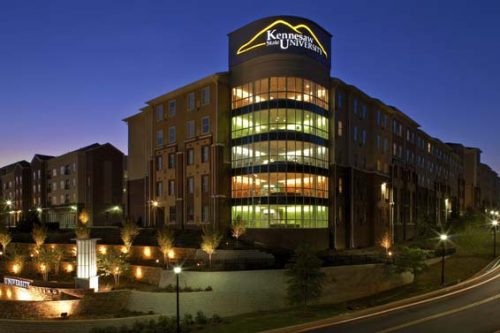 Located just north of Atlanta, Kennesaw State University is a school enrolling some 35,000 students. Arguably, the most noteworthy thing about it is the fact that its officials keep making decisions that land it in court.

In February, the university’s “speech zone” policy came under attack. A student group, Ratio Christi, wanted to put up a pro-life display but a KSU administrator told them that they would be allowed to put up their display where they wanted on campus only if they agreed to remove certain posters that she said were “too controversial.” If they would not agree to that, they would only be allowed to host their display in the “free speech zone.”

Actually, KSU has seven speech zones that can be reserved for activities ranging from one that is optimal because of its proximity to large numbers of people passing by to the least appealing, a secluded, muddy one. That zone comprises just .08 percent of the school’s 405 acres. KSU’s speech zone policy, incidentally, was created by its Office of Student Life. (Such offices usually attract social justice warrior types who are eager to impose their values on everyone else.)

Completely absent from KSU’s regulations are any guidelines for administrators in deciding which sort of speech is going to be relegated to the worst zones and which will be allowed to take place in the desirable zones on campus. As Stanley Kurtz reports here:

While Ratio Christi’s pro-life displays were relegated to tiny, out-of-the-way zones in both 2016 and 2017, due to their supposedly “controversial” nature, in October of last year KSU permitted an LGBT group to reserve all seven speech zones for its “Pride Day” demonstration. So KSU’s zone policy can easily be manipulated by administrators to censor ideas that offend their secular prejudices.

When KSU officials gave Ratio Christi the same discriminatory treatment this year as in 2016 and 2017, the group decided to sue the university for violating its First Amendment rights. On February 22nd, with the assistance of the Alliance Defending Freedom, it filed suit in federal district court. Ratio Christi’s complaint is available here.

Crucially, the complaint reminds the court that the First Amendment “prohibits content and viewpoint discrimination in the public fora for student speech and expression on the campus of a public university.” That is exactly what the administration has done, however, by dictating what Ratio Christi (and presumably any other non-leftist organization) is allowed to say if it wants access to the desirable zones.

Barely was the ink dry on that complaint when KSU found itself embroiled in another suit. This time the aggrieved party is Young Americans for Freedom.

The YAF chapter at KSU wanted to host a talk by the conservative columnist Katie Pavlich. She is not well known except in conservative circles and espouses standard free market/limited government views. Nevertheless, school officials declared that because she was “controversial,” YAF would have to pay a “security fee” of $320 before they would be permitted to host the event. As with the Ratio Christi case, the problem here is that school officials have unfettered discretion to decide which organizations will be hit with security fees and which will not—and use that discretion to disfavor groups they do not like.

Furthermore, the suit takes aim at KSU’s policy of having four classifications for registered student organizations. At the lowest level are “recognized” groups; above them are “affiliated” groups, “sponsored” groups, and “chartered” groups. Where a group is placed in this system matters because the higher the classification, the more access a group has to funding and preferred speech zones.

Once again, ADF is providing legal help. The complaint it has filed on behalf of YAF chapter co-chairman Zach Bohannon argues that KSU’s policies that give campus administrators power to subjectively rank student organizations into those four tiers violate his rights under the First Amendment. Using their complete and entirely subjective discretion under its Registered Student Organization policy, KSU officials decided that YAF would be placed in the lowest tier, thus depriving it of any university funding. When YAF requested that it be moved to a higher tier, officials refused. And further highlighting the pure subjectivity of KSU’s RSO policy, it imposed a security fee for Katie Pavlich while imposing no fee for a Black Lives Matter rally on campus, which it deemed “noncontroversial.”

The problem here is that school officials have unfettered discretion to decide which organizations will be hit with security fees and which will not.

One of the attorneys handling the case, Travis Barham, states in this release, “Kennesaw State’s byzantine speech policies allow officials to place student organizations into an arbitrary caste system of superiors and inferiors, and to assess security fees that numerous courts in other cases have routinely declared unconstitutional.”

It seems evident that YAF’s commitment to “ensuring that increasing numbers of young Americans understand and are inspired by the ideas of individual freedom, a strong national defense, free enterprise, and traditional values” is objectionable to the officials who run the RSO policy. They run it to help their ideological friends and hinder their ideological opponents.

KSU’s mandatory student fees are another aspect of the case. All students must pay them, but then the funds are distributed preferentially. The complaint states, “Mr. Bohannon and every other member of YAF are entitled to viewpoint-neutral access to and allocation of the mandatory student fees collected by KSU or to repayment of the fees they have paid and to be exempt from paying such fees in the future.” The requirement that public universities be viewpoint neutral in the allocation of student fees was set forth by the Supreme Court in the case University of Wisconsin Regents v. Southworth.

KSU cannot claim that it was unaware of the legal problems with its speech policies. Back in 2013, ADF sent a letter to the KSU administration, advising it that they were in violation of the First Amendment. That letter had no impact on the administration.

Given the legal precedents, it seems likely that KSU will lose both cases. Unfortunately, the costs of defending them will fall on Georgia taxpayers, not on the officials who persisted in enforcing rules they had every reason to believe would lead to lawsuits. This common circumstance suggests that it would be wise for states, when contracting with university presidents, to include a clause that penalizes the president for easily avoided litigation. Without such a deterrent, university presidents will continue letting their ideologically zealous underlings make and enforce unconstitutional rules like those at KSU.