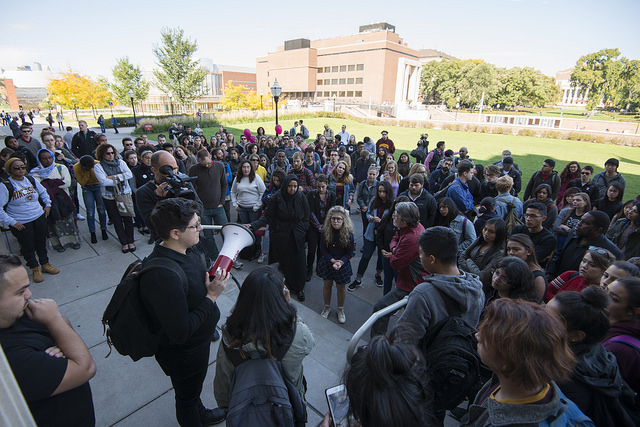 When students (and others) disrupt events where speakers are trying to make arguments they dislike, they say that their conduct is justified.

Most commonly, the disrupters maintain that they are merely preventing “hate speech,” which allegedly doesn’t enjoy the protection of the First Amendment. Therefore, they are perfectly free to keep such speakers from being heard. In fact, they assert that they’re acting righteously by protecting against speech that leads to violence or oppression.

Student zealots, such as those who prevented University of Oregon president Michael Schill from giving a speech, argue that. So, evidently, do some college leaders, as we read in this article.

Their argument, however, suffers from two fatal flaws.

The first flaw is that the First Amendment contains no exception for “hate speech.” It reads, “Congress shall make no law respecting an establishment of religion, or prohibiting the free exercise thereof; or abridging the freedom of speech, or of the press; or the right of the people to peaceably assemble, and to petition the government for a redress of grievances.”

Nothing in that language suggests that government officials are entitled to make an exception for speech they regard as hateful.

But isn’t there an exception for “fighting words?” In the 1942 case Chaplinsky v. New Hampshire, the Supreme Court enunciated a narrow category of speech that is not covered by the First Amendment. Under Chaplinsky, speech that either incites immediate violence or consists of words that by their very nature inflict injury is not protected by the First Amendment. (The case involved a member of the Jehovah’s Witness sect who was convicted of disturbing the peace for having yelled at the sheriff that he and the local government were “fascists” and “racketeers.”)

Students and college officials have often justified their actions to silence speakers by claiming that they are simply preventing speech that could lead to violence or contains words that are inherently injurious. That justification, however, won’t hold up.

But as Sean Clark explains in his FIRE essay, “Misconceptions About the Fighting Words Exception,” the Supreme Court began to back away from Chaplinsky just a few years after announcing it. In 1949, a case came before it, Terminiello v. Chicago, that seemed to fall easily within Chaplinsky. Rather than a single angry man yelling at a sheriff, in Terminiello we had an angry Catholic priest who denounced Jews at a large event organized by Christian Veterans of America, where a large number of protesters outside the hall were throwing rocks. Fighting words? Unquestionably so.

The function of free speech under our system of government is to invite dispute. It may indeed best serve its high purpose when it induces a condition of unrest, creates dissatisfaction with conditions as they are, or even stirs people to anger. Speech is often provocative and challenging. It may strike at prejudices and preconceptions that have profound unsettling effects as it pressures for the acceptance of an idea.

Clark points out that in a string of subsequent cases, the Supreme Court continued to retreat from Chaplinsky, even though it never expressly overruled that decision. He concludes, “Either as a result of confusion or bad faith, many administrators ignore the modifications made by the Supreme Court and continue to use the original (Chaplinsky) holding as a legal justification to censor offensive, vulgar, and profane speech.”

As recently as last June, the Court again affirmed that there is no First Amendment exception for unpopular speech. UCLA law professor and First Amendment scholar Eugene Volokh, writing for The Washington Post after the Court’s decision in Matal v. Tam (the “Slants” case), noted that in Supreme Court jurisprudence “viewpoint discrimination—including against allegedly racially insensitive viewpoints—is unconstitutional. And this no-viewpoint-discrimination principle has long been seen as applying to exclusion of speakers from universities, denial of tax exemption to non-profits, and much more.”

Therefore, neither campus officials nor students have any legal grounds to prevent or disrupt speech because they say it has “fighting words” that could be offensive to listeners.

Those who want to silence speakers have also tried another argument. They maintain that only governmental actions can violate the First Amendment. And since they—student protesters—don’t have any governmental power, they are free to do whatever they want to prevent speech.

In this Chronicle of Higher Education essay, law professors Howard Gillman and Erwin Chemerinsky examine that argument and find it wanting:

If audience members had a general right to engage in disruptive or threatening behavior by using loud, boisterous, or inciting speech, it would give any determined individual or group veto power over the expression of any idea they opposed. Only the most benign or inoffensive ideas would be expressible. It would empower people to believe, ‘If we can’t get the government to censor the speech, then we’ll do it ourselves.’

In short, while the anti-speech protesters are correct that the First Amendment does not apply to private conduct, it does not follow that their conduct—such as the way ACLU spokeswoman Claire Gastanega was shouted down at William & Mary in October—is legitimate.

Apropos of the William & Mary incident, President Taylor Reveley said, “Silencing certain voices in order to advance the cause of others is not acceptable in our community.” That gets at the crucial point: Colleges are entitled to make the rules for conduct on campus, not a group of students. Public institutions cannot have rules that impinge upon First Amendment rights; private ones can have speech suppressing rules if they want, but no group of students gets to set them.

Consider the case of Claremont McKenna College, where last year an aggressive mob of approximately 170 students (and probably outsiders as well) blocked invited speaker Heather Mac Donald from giving her planned talk. They shouted, chanted, banged on drums, and declared that Mac Donald is a white supremacist who denies that black people have a right to exist.

Mac Donald’s account is available on City Journal, where she writes, “The great accomplishment of the European enlightenment was to require all forms of authority to justify themselves through rational argument, rather than through coercion or an unadorned appeal to tradition. The resort to brute force in the face of disagreement is particularly disturbing in a university, which should provide a model of civil discourse.”

Fortunately, the administration at Claremont McKenna decided to uphold its rules and punished seven of the students, three with suspensions for a year, two with suspensions for a semester, and two with “conduct probation.” The school’s press release about the punishments stated that the students’ actions “breached institutional values of freedom of expression and assembly. Furthermore, this action violated policies of both the College and The Claremont Colleges that prohibit material disruption of college programs and created unsafe conditions in disregard of state law.”

In sum, there is no justification for protests that prevent speakers from being heard and college officials (or law enforcement officials if state laws were broken) are perfectly justified in punishing those who refuse to abide by the rules. Allowing the heckler’s veto to operate would, as Gillman and Chemerinsky conclude, “represent an abandonment of foundational principles of modern American higher education.” If we’re lucky, 2018 will be the year when people on our campuses stop saying they have a right to disrupt free speech.

The Campaign to Stamp Out Academic Heresy