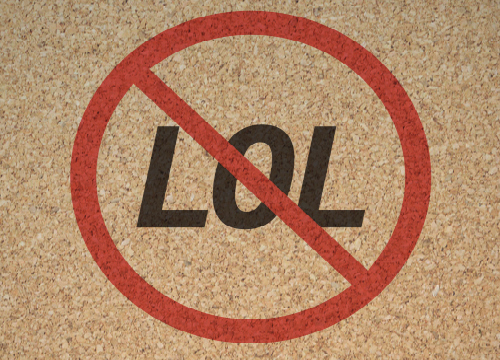 A university president recently addressed his campus community about an incident that had shaken his Wisconsin school.

“The last few days have been painful ones for many members of our community, as they have also been for me,” wrote Lawrence University’s Mark Burstein. “The event and its aftermath have left many students wondering whether the University cares about their safety.”

Again and again, Burstein returned to the issue of safety: “We are working closely with the Appleton Police Department to investigate all instances where physical safety is threatened. If there is anyone who has an immediate safety concern, please contact Campus Safety….”

Television news crews captured the aftermath of an event so disturbing that Burstein never identifies it specifically. So what was it? A spate of muggings? A murder?

No. The disturbing event was a campus screening of my documentary, Can We Take a Joke? The film examines the clash between comedy and outrage culture, and in it comedians ranging from newbie college jokesters to successful veterans such as Gilbert Gottfried, Penn Jillette, Christina Pazsitzky, Adam Carolla, Lisa Lampanelli, and Jim Norton push back against the “Outrage Mob” and stand up for comedy and free speech.

The film includes a variety of free speech scholars, and pays special attention to the college scene. It explains how universities have taught generations of students that they can shut down opinions they don’t like simply by declaring they’re offended.

Being offended is much easier than formulating a persuasive argument for your point of view, and in the upside-down modern college environment, parading your offendedness actually confers an air of enlightenment. What’s worse is that students bring the muzzler mentality with them after they graduate, and make society at large less tolerant and less fun.

So what happened at Lawrence University? The episode began when a new student organization called Students for Free Thought announced it would host a screening of Can We Take a Joke? followed by a discussion. The club had been given provisional status by the student government, and was in the process of seeking official recognition (an important designation for any student group hoping to use school resources to hold meetings, promote events, and so on).

The promotional fliers made it clear that all were welcome to attend, and the organization’s efforts seemed to be working. The student newspaper reported that the event “generated a large amount of discourse on Facebook in the days leading up to the event due to the controversial nature of the film.”

Can We Take a Joke? includes footage of incidents where outraged college students shouted down speakers they disagree with. Ironically, that’s pretty much what happened at the Lawrence screening. Some students shouted at the screen, then a dispute erupted; one student was asked to leave, and organizers stopped the film halfway through the screening.

The film makes the point that shouting someone down is mob censorship, not free speech. But the life-imitating-art irony continued when various students defended the hecklers. According to them, hollering during an event isn’t a sign of narrow mindedness, and it’s not evidence of rudeness toward the organizers or other attendees. You see, censorship is just how some people exercise their free speech!

Shortly after the event, the president of the university’s student government announced the decision to deny official recognition to Students for Free Thought, explaining that he and his colleagues were “concerned about the well-being of the campus at large” and didn’t believe the group would “have a positive impact.”

President Burstein thanked the student government leaders for their “careful analysis.” Never mind that the university’s official mission statement promises, “members of the Lawrence community are free to engage in, speak on, and write about scholarly research and creative activity without fear of censorship or retaliation.”

Some students argued that organizers should have provided “trigger warnings,” since the film includes blue comedy and discussion of sensitive topics including homophobia, 9/11, and sex. However, Can We Take a Joke? does provide a trigger warning of sorts. The film opens with the following address from comedy legend Gilbert Gottfried:

I’d like to apologize if I’ve hurt anyone for anything with anything I’m going to say. Or if it’s an opposing viewpoint to one you might have. And if I look like I’m thinking about something that might offend you, I apologize for hurting you.

Perhaps that’s not precisely the language the typical Assistant Dean of Inclusion would choose, but any students finding Gottfried’s warning insufficient had plenty of opportunity to take preemptive action to avoid being blindsided by upsetting material.

Concerned students could have watched the film on any one of the many popular digital outlets that offer it. Don’t have time to watch the whole thing? Watch a little bit and you’ll get the idea. Don’t want to spend a lot of money? It’s just 99 cents on iTunes, and it’s free to Amazon Prime subscribers. Thirty seconds’ worth of Googling would yield lots of free material including articles, reviews, the official trailer, and movie clips.

I wonder if just maybe some of the complaining students were more interested in parading their offendedness than in avoiding disturbing material.

Yes, there’s a great deal that’s illiberal and depressing about the modern college scene, especially when students themselves often clamor for speech codes. However, there also are hopeful signs.

Can We Take a Joke? has screened on about 250 campuses so far. There have been a few eruptions of intolerance, ranging from the tearing down of promotional posters to the pulling of a fire alarm, which effectively shut down a screening and discussion in which I was scheduled to participate (and at my alma mater no less!). But far more common have been examples of students with little in common coming together to have a laugh and talk frankly about free speech.

Take the screening at Ohio’s Capital University. It was co-sponsored by College Democrats, College Republicans, and Young Americans for Liberty. “The film did a good job of sparking discussion between students with different philosophies, and gave them an opportunity to better understand each other,” noted Jason Fugate, treasurer of Campus Democrats.

Some of my fondest memories come from a post-screening discussion I attended at Mount Saint Mary’s University, a “majority minority” campus and Los Angeles’s only women’s university. I entered the auditorium right as the screening concluded, and the environment was tense. But I heard the students out, and they heard me out.

The Q&A session went on longer than scheduled, and all of us found plenty of common ground. Afterward, the professor who asked me to attend sent me some takeaways the students offered including: “It is important to discuss controversial issues rather than push them under the rug,” and “Free speech, even though it may be offensive to you, should still be respected.”

Such events don’t attract television cameras, and so the students who attend them are easy to overlook. The loudest and most intolerant students are easy to spot, but I doubt that they represent the majority of students. After all, even at Lawrence University the show eventually did go on. Organizers continued the screening and when it was over a diverse cross section of the campus engaged in a stimulating discussion about free speech.

As Greg Lukianoff, head of the Foundation for Individual Rights in Education and one of the free-speech scholars featured in the film likes to say, “Free speech is one of the greatest innovations for peace humanity has ever devised!”

Before we talked it out, how did we humans settle disputes? Usually through violence.

And that’s what makes President Burstein’s remarks about “The Event That Shall Not Be Named” so misleading. His vague references to “serious threats” and “instances where physical safety is threatened” do not provide critical details. Did violence actually occur? Who made the serious threats? What was the context?

These are the people who created a tinderbox campus that can be ignited by one movie filled with jokes.