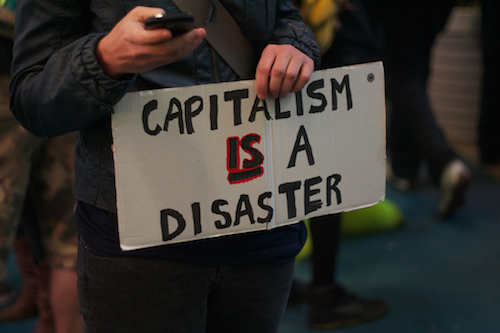 Such views are especially prevalent with the Millennials, a generation born in the last two decades of the 20th century and early years of the 21st. A 2016 Harvard University poll showed only 42 percent of Millennials support capitalism and 33 percent want socialism. A 2015 Gallup poll found that 70 percent of them would consider voting for a socialist presidential candidate, as indeed many did in 2016. Even more astounding, another poll before that election found that only half of Millennials think Communism was or is a problem. More recently, a leftist group of them protested at the Victims of Communism Memorial in Washington, D.C., where some were photographed extending their middle fingers to the memorial.

Among much commentary about these developments, Joel Kotkin examines “Why Socialism Is Back” at Real Clear Politics and Warren A. Stephens asks “Why Do the Young Reject Capitalism?” in the Wall Street Journal. In a letter to the editor, emeritus university professor Phillip Nelson answers Stephens’s question and supplements Kotkin’s explanation succinctly: “Part of the answer is obvious. Anticapitalism is what they have been taught.”

The “anti-capitalistic mentality,” as Ludwig von Mises described it over half a century ago, continues its influential effects. Indeed, as Joseph Schumpeter warned in Capitalism, Socialism, and Democracy (1942), capitalism’s economic success enables socialist sentiments, especially among academic intellectuals. An anecdote evidences that effect: an academic told me he called some of his colleagues “Mercedes Marxists.”

As historian Alan Charles Kors wrote in an essay titled “Can There Be an ‘After Socialism?’” (first published in the journal Social Philosophy and Policy):

The pathology of Western intellectuals has committed them to an adversarial relationship with the culture—free markets and individual rights—that has produced the greatest alleviation of suffering, the greatest liberation from want, ignorance, and superstition, and the greatest increase of bounty and opportunity in the history of all human life. …

The cognitive behavior of Western intellectuals faced with the accomplishments of their own society, on the one hand, and with the socialist ideal and then the socialist reality, on the other, takes one’s breath away…. In the names of fantasy worlds and mystical perfections, they have closed themselves to the Western, liberal miracle of individual rights, individual responsibility, merit, and human satisfaction. …

From one end of the earth to the other, Marxist intellectuals, propagandists, professors, and apologists never contrasted the existing “socialist world” with the more or less liberal societies of Western Europe and North America. …

Indeed, it is precisely to avoid the revivification of classical liberal principles that our teachers, professors, information media, and filmmakers ignore the comparative inquiry that the time so urgently demands.

Clearly, Millennials’ rejection of capitalism and acceptance of socialism show that they know little about either and do not know their comparative histories. Instead, they have learned relativism, postmodernism, and other academic fads. In much of the humanities and soft social sciences—especially with literary theorists and social justice warriors in the race, class, and gender grievance disciplines—capitalism is caricatured as racist, sexist, etc., and generally bad. Anti-capitalism books like Empire (2001), co-authored by a self-described “joyful communist” literary theorist, attract more attention from Millennials than pro-capitalism books like two by Nobel laureates in economics, F. A. Hayek’s The Road to Serfdom (1944) and Milton Friedman’s Capitalism and Freedom (1962).

The anti-capitalism education of Millennials is but part of the problem. The media and entertainment establishments are also largely anti-capitalism in expression if not in their own economic practices. For example, the New York Times recently blamed the civil and economic disaster in Venezuela on its late leader Hugo Chavez’s populism and authoritarianism; although Chavez was a socialist and brought socialism to once-prosperous Venezuela, the Times never mentioned the words socialist or socialism. And Hollywood’s recent film Trumbo, which lionizes a Communist screenwriter prominent in the 1940s, uses the word communism but explains its meaning by having the lead character assure his young daughter that it is simply like sharing her lunch at school with another child without anything to eat.

Bret Stevens had a better answer for his son in his column “What’s Socialism, Dad?”: “Democratic socialism—whether [Hugo] Chavez’s or [Bernie] Sanders’s—is legalized theft in the name of the people against the vilified few…. Bernie’s Way paves the same road to serfdom that socialism does everywhere.”

Moreover, a horrendous problem remains, as explained by Alan Kors: the road to serfdom is littered with “the bodies.” Kors refers to Stéphane Courtois’s The Black Book of Communism: Crimes, Terror, Repression, which shows that approximately 100 million lives were lost to Communism. It is too much to expect that many Millennials, especially those who extended their middle fingers to the Victims of Communism Memorial, have read or will read The Black Book of Communism. But it would be nice if some would at least read Kors’s essay on socialism and communism; it’s brief, but profound and provocative. It would be nice too, but also too much to expect, for some colleges and universities to assign it in their summer reading programs.

Millennials and the Anti-Capitalistic Mindset