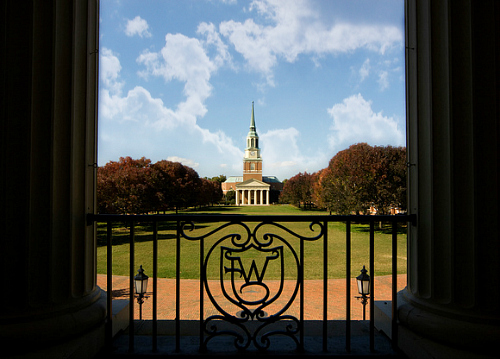 Last fall Wake Forest University announced a $4.2 million donation to fund “the study of human flourishing” at the university’s newest institute—the Eudaimonia Institute (EI). Although it took people a while to pronounce this elegant Greek word correctly—the pronunciation is “yoo-dye-mo-NEE-uh”—the generous gift seemed to be a perfect fit with Wake’s mission.

The Greek root words in “eudaimonia” are “eu” (meaning good) and “daimon” (meaning a protective spirit). It turns out that the word “demon” (as in Demon Deacon) comes from the same root word as “daimon,” so the institute’s name fits especially well with the school’s identity. In Greek, “eudaimonia” means “good spirit” and Demon Deacon means “servant spirit”! Nice match.

But that’s not the way a lot of faculty members saw it. This wasn’t a good-spirited endeavor in their eyes. It was bad.

The Greek word for “bad” is “kako,” and the institute’s detractors knew it was bad because the main source of the gift had a bad name: Koch. “Koch” and “kako” even sound similar. (Actually “Koch” comes from a Germanic word meaning “cook.”)

Charles Koch, whose foundation donated the money to Wake Forest, is about as evil as they come, according to campus radicals, who soon educated the unenlightened by holding protest meetings and circulating a lengthy petition describing Koch’s vast plan to hijack higher education and spread his benighted ideas. Faculty and students soon learned that the multi-billionaire Koch is a libertarian. Or maybe even a conservative (which is obviously still worse).

Libertarians and conservatives are a rare species on campuses and it appears that although some college professors have apparently never actually met any of them, just reading about their goals is enough to make their hair stand on end. It seems that Koch’s big idea is to push something called “freedom.”

What do you do when freedom tries to invade your campus? The response was swift and clear—the petition, signed by almost 200 faculty members, impelled the faculty Senate to demand that the university administration return the tainted money and sever all ties with Koch’s foundation. The student government met as well and considered endorsing the Senate’s resolution, but ultimately declined to do so.

You may be perplexed by the reaction of these Wake Forest faculty members. Don’t college professors tout freedom, especially academic freedom? This time they didn’t. Instead, they turned their backs on the Eudaimonia Institute.

As a member of the Eudaimonia Institute’s Advisory Board, I heard reports that people who were affiliated with the institute were being ostracized and unfriended. During a college faculty meeting, angry comments and accusations were hurled at the director of the institute, philosopher James Otteson, and the faculty moved to deny credit to students for taking a course created by Otteson. (The course is taught in the business school, which has greeted Otteson and EI warmly, but credit was denied to non-business majors in the college who took this course.)

Why was this reaction to a grant to study human flourishing so hostile? I think I discovered the reason when I was invited to explain EI’s mission to Wake’s student government.

I explained that EI’s mission is genuine. It has begun to and will continue to study human flourishing from a wide range of viewpoints. Some of these viewpoints (those to the left of center) have increasingly claimed a monopoly on wisdom, knowledge, and understanding and have actively moved to push other viewpoints off campuses all over the nation and increasingly at Wake Forest. In a boat that is listing badly to one side, it is possible that EI will add balance and help right the ship by bringing in new viewpoints.

For saying that, I was told that my comments somehow confirmed the ideologically-biased mission of EI. Imagine that! You’re an ideologue only if you are open to opinions that aren’t firmly to the left of center.

After I spoke, I overheard a detractor speaking with some earnest student defenders of EI in the hallway. This faculty member had found a “smoking gun” in Koch Foundation statements, a smoking gun that said its mission is to promote freedom. How could you possibly object to the goal of freedom, asked the students. Isn’t our country founded on freedom?

The response said it all. “Freedom,” the students were told, is a code word to these people. When they say freedom they only mean less government regulation and lower taxes. This is, of course, a caricature of the range of freedoms that interest the Koch Foundation, but it is very telling. These ideas are verboten to campus radicals. Students, faculty, and the rest of the world should never be exposed to ideas about a smaller government and more freedom for people in their economic lives.

It is also deeply ironic, because so little of what EI will study is likely to touch on such mundane issues as taxes and regulatory overreach. EI is unique because it’s trying to look deeper—into the human mind, into the human soul, into the loving embrace of family members, and even into eternity. (Fittingly, one of the board members is in the school of divinity.) Raise up your gaze, will you! Do you think that money alone can make people and society flourish?

To their credit, the president, provost, other administrators, and board of trustees at Wake Forest rejected these calls to decline the Koch Foundation’s gift.

In April, EI held its first big event—a conference that did exactly as advertised by examining human flourishing. The keynote address bore the title “Eudaimonia Is Not Measurable Pleasure, But the Fruit of a Liberal Life.” (Remember that the root of “liberal” means “free.”) Other papers had titles like “Eudaimonia and International Politics,” “Desperation and Unfulfilling Lives in America: The High Costs of Being Poor in the Land of the Dream,” “Just Action and Eudaimonia in Plato’s Republic,” and “Happier People Are Less Likely to Be Unemployed: Evidence from Longitudinal Data in Germany.”

Perhaps the faculty enemies of the Eudaimonia Institute would drop their opposition to it if they looked at what it does, rather than where its funds come from.

Philosophers, economists, political scientists, and other scholars delivered papers—just as they do at every other academic conference. But the conversation was unusually interdisciplinary and participants from different fields spoke with each other, instead of past each other as is often the case.

Sitting in the audience, taking notes, were some high-profile detractors of the institute, organizers of the effort to shut down this very discussion. My sense is that they were surprised by what they saw and heard: ideas from across the political spectrum and a calm discussion of how to measure human well-being, how to conceptualize it, and how to further it. Some common ground was found, but the most solid terra firma was the very conversation itself—a genuine attempt to learn from each other, an authentic study of human flourishing.

Perhaps the faculty enemies of the Eudaimonia Institute would drop their opposition to it if they looked at what it does, rather than where its funds come from.