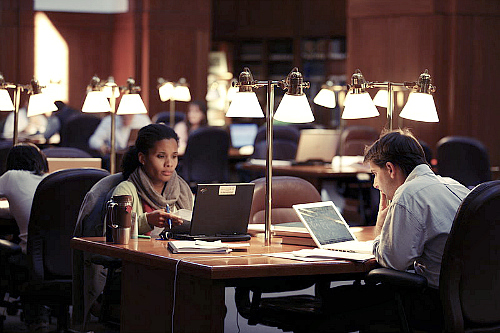 Legal education has become a surprisingly regular topic of news media for several years now. Most of this commentary has focused on enrollment and matriculation problems, bar passage rates, accreditation standards, student debt, and the job market for recent graduates. These are pressing issues that raise vexing questions for law school administrators, and they warrant the attention they’ve received.

Little attention, however, has been paid to curriculum, except as it pertains to those issues. And not just curriculum, but subject matter within the curriculum.

There are certain subjects—let’s call them “the permanent things”—that always have and will interest scholars of the law because of their profound influence on legal norms and institutions: history, philosophy, literature, and theology. Whether they belong in law schools or some other department, whether they prepare students to become practice-ready or not, these topics will remain relevant to subsequent generations of jurists and legal scholars. There will be a place for them somewhere within the world of legal learning and letters.

Law school faculty and research centers have expanded over recent decades to include studies of these humanistic fields. As long as these fields populate law school, there’s a felt need for rigorous liberal education in them.

Ordered liberty in the United States has historically rested on a commitment to religious faith and pluralism, fidelity to the rule of law, and traditional liberties grounded in the conviction that all humans are created equal and endowed by their creator with certain inalienable rights. These values characterize the American experiment. Our society is built on them, and its continued vitality depends upon maintaining and promoting our commitment to them.

Yet these values are ridiculed and attacked in universities across the country. When they’re taught, they’re often treated as products of a morally inferior era and thus as unworthy of our continued respect. And because these values aren’t seriously or rigorously taught, students lack working knowledge about them and are therefore unprepared for the kind of civic engagement that young people desire and demand.

A decline in civic education has caused misunderstanding and underappreciation of our foundational norms, laws, and liberties. Religious liberty is mischaracterized as license to harm and on that basis is marginalized. Economic freedom is mischaracterized as oppression and is regulated away. Well-positioned reformers with good but misguided intentions seek to fundamentally transform the American experiment from the ground up. They work to limit foundational freedoms and increase regulatory power.

Without well-educated lawyers and civil servants equipped to resist these reformers, the transformation of America will result in the destruction of the freedoms enabled by our founding generation. We cannot allow this to happen. The Blackstone & Burke Center for Law & Liberty at Thomas Goode Jones School of Law, for which I serve as executive director, therefore seeks to educate the legal community in such areas as natural law, natural rights, religious liberty, economic freedom, freedom of speech, freedom of association and assembly, and other liberties that find expression not just in the American but in the larger Western jurisprudential tradition.

I define “legal community” broadly to include law students, law professors, public policy institutes, political theorists, judges, and businesses in addition to practicing lawyers. Because my center is housed in a law school, it’s well positioned to instruct future lawyers while bringing together faculty from different disciplines who are steeped in liberal education.

Numerous organizations promote these values in the political arena, but few attempt to reconnect foundational values with the law. The Blackstone & Burke Center aims to fill this gap by bringing together scholars and students committed to American constitutional government and the common law foundations of our cherished liberties. Our target audience will include law students, judges, and civics groups.

For law students, we offer the Sir Edward Coke Fellowship. We’ve accepted our inaugural class of fellows, who, beginning this fall, will study formative texts in Western jurisprudence in monthly seminars that supplement their core coursework. Next semester, we’ll read and discuss works by Aristotle, Grotius, Hayek, Alasdair MacIntyre, and Robert P. George. The center will be a key networking opportunity for fellows seeking careers at foundations, think tanks, universities, and public policy organizations.

Fellows will also help to organize a judicial college for state jurists. Thanks to the Acton Institute, Atlas Network, and the Association for the Study of Free Institutions, the Blackstone & Burke Center possesses the grant money needed to host its first judicial college in October. Professor Eric Claeys of Antonin Scalia Law School at George Mason University will direct this event, the readings for which include selections from not only cases (old and recent) but also Aquinas, Locke, Blackstone, and Thomas Jefferson. The readings for judges are extensive, and the seminar sessions are meant to be intensive to ensure that judges get as much out of the experience as possible.

The center will also provide basic civics education to local communities. For several years, the Intercollegiate Studies Institute issued reports on the poor state of civic literacy in the United States. The National Association of Scholars recently issued a detailed report on the inadequacies and politicization of the “New Civics.” The current issue of Academic Questions, moreover, describes the sorry state of civics knowledge in the United States and the tendentious methods and institutions that teach political activism rather than deep learning.

Against these alarming trends, my center organized and hosted a reception featuring a U.S. Library of Congress interactive Magna Carta exhibit, which was displayed in the rotunda of the Alabama Supreme Court for three weeks and now remains in the possession of the Alabama Supreme Court Law Library. The reception included prominent judges, business and university leaders, lawyers, and the general public.

For example, Chief Justice Lyn Stuart of the Alabama Supreme Court and Judge William “Bill” Pryor of the Eleventh Circuit Court of Appeals delivered remarks about Magna Carta during the reception, and young people conversed casually with judges about the legal system, federalism, and the challenges and opportunities facing the legal profession in the 21st century. This fall, the center is cosponsoring an event with the Foundation for Economic Education on the campus of Auburn University to explore the relationship between law and markets, and I hope to see as many high-school students as college students in attendance.

Legal education is strikingly different today than it was when Thomas Jefferson apprenticed under George Wythe, or when Abraham Lincoln read law before receiving from a county circuit court certification of his good moral character, then a prerequisite to practicing law.

Nevertheless, legal education looks much the same as it did in the late nineteenth century, when Christopher Columbus Langdell, dean of Harvard Law School, instituted a curriculum, pedagogy, and case method that came to characterize “the law school experience.” If there’s been a paradigm shift, it’s been toward more practical aspects of legal education such as clinical programming. Yet many lawyers remain ignorant of the history and philosophical conventions that shaped their profession over centuries.

The Blackstone & Burke Center for Law & Liberty is a modest corrective in that it doesn’t seek to remake legal education or demolish longstanding practices and procedures in one fell swoop. Rather, it does what it can with the resources and tools available to strive to renew an America where freedom, opportunity, and civil society flourish. In the long run, I think, these reasonable efforts will have powerful effects and far-reaching benefits, both within the legal academy and beyond.