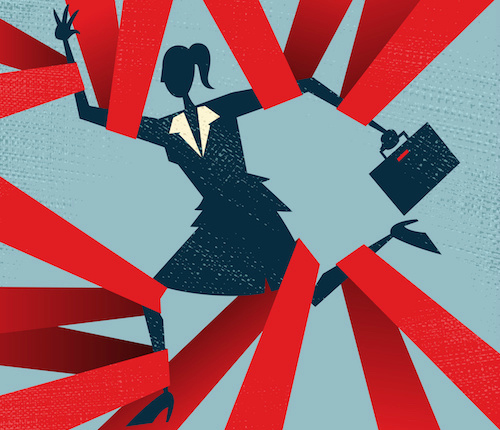 U.S. Secretary of Education Betsy DeVos has signaled that she might be a force for good when it comes to scaling back Obama-era Title IX expansion. This would be a welcome change. Such regulatory buildup has raised higher education costs and allowed the federal government to encroach more and more into areas such as campus sexual assault adjudication and even bathroom policies regarding transgender students.

To quickly refresh, Title IX of the Education Amendments of 1972 prohibits academic institutions receiving federal money from excluding individuals from participation in educational programs or denying benefits on the basis of sex.

For nearly 40 years, such prohibitions applied primarily to university policies on admissions, scholarships, and athletics. But in 2011, the Department of Education’s Office for Civil Rights (OCR) augmented the scope of Title IX in an attempt to combat sexual violence on campus.

OCR’s then-assistant secretary for human rights, Russlynn Ali, issued a “Dear Colleague” letter  that effectively turned university administrators into amateur gumshoes tasked with investigating sexual misconduct. And many universities, at risk of losing federal funding or being referred to the Department of Justice for litigation, began devoting more resources to regulatory compliance.

During her recent confirmation hearing, when pressed by Senator Bob Casey Jr. (D-Pennsylvania) if she would commit to uphold OCR’s 2011 directive, DeVos said, “It would be premature for me to do that today.” Indeed it would have been premature for DeVos to defend the guidance then, and it would be wrong for her to defend it now.

One reason why is that the 2011 Title IX expansion has imposed unnecessary financial burdens on universities across the country. In the University of North Carolina system, for example, there are now at least 80 employees related to Title IX, the majority of whom are focused on enforcing the Dear Colleague letter.

North Carolina State University (NCSU) identifies four Title IX representatives on its website. However, it also lists three offices with direct or indirect Title IX responsibilities: the Office for Institutional Equity and Diversity, the Women’s Center, and the Office of Student Conduct. That doesn’t include the counseling center, which also fulfills Title IX requirements.

NCSU’s Office for Institutional Equity and Diversity and Women’s Center account for 17 employees, four of whom have six-figure salaries; the highest-paid earns $190,000 per year. Staffing costs for just these two departments total more than $1.2 million each year.

Other schools in the state have experienced similar increases in compliance costs as a result of the 2011 Dear Colleague letter. As Susan Burgess, director of university compliance at UNC Charlotte, told a local NPR affiliate last year, “Initially, our Title IX coordinator was a department of one. It became necessary to hire an administrative assistant and individuals to investigate incident reports that come in.” UNC Charlotte now employs 8 Title IX administrators, not including Burgess, who is in the department of legal affairs.

If Secretary DeVos works to reduce such compliance costs and rein in Title IX and other regulatory excess, she will find allies in North Carolina and elsewhere. In fact, there is growing recognition, across political divides, that heightened federal regulation is wreaking havoc in higher education.

As the Martin Center reported last year, universities spend millions each year navigating a labyrinth of new federal regulations (many of which are related to Title IX). Based on some cost estimates, the UNC system could be spending roughly $500 million each year, or $2,500 per student, on federal compliance alone.

Curbing federal regulatory excess would do more than just stem the tide of compliance-related administrative growth, however. It would also act as a check against university administrators, some of whom, in recent years, have denied due process rights to those accused of sexual offenses on campus.

Not surprisingly, much of that administrative misconduct has come as a result of the 2011 Dear Colleague letter, which says police investigations “may be useful” but not “determinative of whether sexual harassment or violence violates Title IX.” Further, it says that a school “should not delay conducting its own investigation or taking steps to protect the complainant because it wants to see whether the alleged perpetrator will be found guilty of a crime.”

What this means in practice is that in some cases, Title IX bureaucrats can review—and act on—“evidence” that is frequently as scant as “he said, she said.” And at the conclusion of an investigation school officials are commanded to decide the case based on the lowest possible burden of proof, the preponderance of the evidence standard.

Unfortunately, some campus officials seem indifferent to the problems inherent in this system. In the same NPR interview in which she acknowledged that new OCR mandates were driving up costs at UNC Charlotte, Susan Burgess said flippantly, “There may not be witnesses to the incident and with the lower standard of preponderance of evidence, it’s easier for us to adjudicate a case between two individuals where one is accusing and the other is denying.”

DeVos has offered at least a glimmer of hope that the Department of Education might put an end to this kind of unconstitutional administrative encroachment. Doing so would rightfully shift legal authority away from Title IX bureaucrats, and back to law enforcement.

Another positive sign is DeVos’s recent decision to sign on to the Trump administration’s directive to strike down a 2016 Dear Colleague letter that made transgender protections the purview of Title IX regulators. The 2016 guidance letter was OCR’s reflexive, politicized response to North Carolina’s controversial House Bill 2 (later dubbed “the Bathroom Bill”).

If successful in eliminating such overreach, DeVos and the Trump administration will have helped to restore at least some decision-making power back to local and state governments, as well as individual universities.

Those in favor of minimizing Washington’s control over higher education also might appreciate DeVos’s recent hiring of Candice E. Jackson, who will serve as acting assistant secretary for civil rights at OCR. Jackson is an attorney and self-described “libertarian feminist” who has worked as litigation counsel at Judicial Watch, a conservative watchdog foundation. Though Jackson’s hiring appears to be a temporary arrangement, the mere fact that she received DeVos’ vote of confidence suggests that the Education Department may be poised to make serious reforms.

DeVos and her Department will be judged in part on their ability to roll back the expanded Title IX powers granted by the Obama administration to Washington bureaucrats and university administrators. If successful, universities, students, and taxpayers stand to benefit.