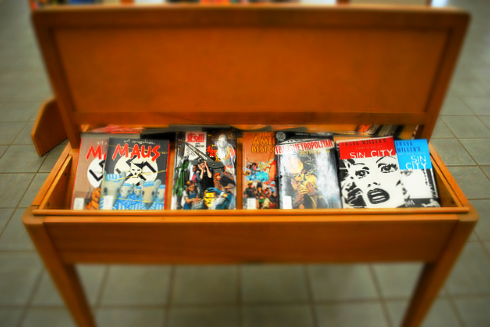 For example, one course at UNC Chapel Hill titled “The Visual and Graphic Narrative” can be taken to satisfy the literary appreciation part of a student’s general education requirements. (Students are only required to take one literary appreciation class.) The university also offers a course titled “Comics as Literature” as a first-year seminar.

Given these courses’ rising popularity among students, administrators and instructors may view them in terms of their ability to renew student interest in the humanities. But while graphic novels do have artistic merit, and are of aesthetic interest, the rise of undergraduate courses on graphic novels is problematic.

One reason is that the majority of graphic novels tend to advance political agendas. The graphic novels found on course syllabi and on reading lists often deal with controversial political issues such as social justice, immigration, gay rights, etc. This is part of a larger trend in the humanities, where focus often is on oppression and identity politics.

For example, Ursinus College assigns the widely acclaimed and controversial Fun Home by Alison Bechdel in undergraduate literature courses. Bechdel’s graphic novel is written as memoir, and discusses her experiences growing up in a dysfunctional family. The reader follows Bechdel as she learns about her father’s homosexuality and her lesbianism.

Another graphic novel, Bitch Planet by Kelly Sue DeConnick, also is a popular choice on university syllabi and has been described as an “intersectionally feminist text.” The book is about “a woman’s failure to comply with her patriarchal overlords.”

Of course, there is nothing inherently wrong with reading about these topics or with discussing them. But what is particularly concerning about assigning these politically charged books is that it seems to be part of a larger push to rid the university of its traditional focus, and to push a social justice agenda.

That view of graphic novels is seen in the general education classes that undergraduates can take. For instance, the previously mentioned “Comics as Literature” class offered at UNC Chapel Hill describes “graphic literature’s unique ability to be a medium for the marginal and oppressed in the 21st century.”

In addition to the fact that graphic novels often are used to further a political agenda, it seems that they don’t possess the same merit as traditional literature. Given students’ limited time in college, it is pressing that they be presented with more intellectually demanding readings. This is especially true when a student’s general education course may be the only exposure to literature that he or she receives during college.

Part of the problem with substituting graphic novels for text-based books lies in the medium itself. Grappling with a text to understand its meaning is a more intellectually demanding task, and requires a greater use of one’s reasoning skills.

As Neil Postman argues in his book Amusing Ourselves To Death, “learning to be critical and to think conceptually and rigorously do not come easily to the young but are hard-fought victories.” Even though there are many ways to learn, Postman suggests that the written word is most effective in training students to think about complex ideas.

His primary argument in favor of the written word is that “[reading is] essentially a rational activity” and thus is most conducive to developing strong and coherent reasoning skills. It is difficult to believe that reading a graphic novel could do the same in this regard as having to digest, say, The Iliad.

This is because reading requires a unique interplay of intellect and imagination. In a recent Martin Center interview, Ashley Thorne of the National Association of Scholars (NAS) argued that reading “texts without pictures” is more suitable for college level reading, and “stretches [students’] minds more.”

Texts without pictures require students to exercise abstract reasoning in comprehending the meaning of the text, leaving the accompanying visualizations to their own imagination. The images found in graphic novels, on the other hand, remove much of the need for students to exercise their intellects in order to process the main ideas.

Of course, there is no doubt that, in some sense, graphic novels and literature are equally capable of inviting the reader to contemplate complex ideas. But the portrayal of content is only part of a work’s literary value.

For example, a book, a movie, and a graphic novel can all tell the same story. Maus, for instance, is a graphic novel about a Jewish man’s experience as a holocaust survivor. In the story, the Jews are portrayed as mice and the Nazis are portrayed as cats. Admittedly, this vivid and captivating interplay between images and narrative text can be quite engaging and informative.

But the same could be said about films. The film Life is Beautiful portrays the story of the holocaust just as accurately and vividly as Maus does. But that does not mean that one medium has the same value as the other, or could supplant the other. It certainly does not imply that we might replace literature classes with film-watching classes.

Students, therefore, should not be led to believe that graphic novels are just as valuable as books from the literary canon. Reading a graphic novel like Fun Home is not a fitting replacement for Sense and Sensibility or Hamlet.

Nevertheless, graphic novels continue to be popular choices on campus. They have made their way onto many universities’ summer reading lists. The National Association of Scholars provides an annual report on the books that appear on these lists. The report mentions that “many common readings discuss books of which a film or television version exists, [and] an increasing number are graphic novels or memoirs….”

While graphic novels are not capable of the same literary complexity as written books, this does not mean that they do not have their own aesthetic value. Although they should not constitute the entirety of a student’s exposure to literature in college, their artistic qualities are worthy of being studied, even in a university setting.

Perhaps instead of being used to fulfill general education requirements, it would be more reasonable that graphic novels be studied in upper division elective courses. In other words, such courses should build upon the student’s already firm foundation in classic books from the literary canon. This argument was made recently by David Randall in his article “Comic Books in a Liberal Education”:

A comic book should not be chosen because it will make education easier for a student, but because it will make it harder, as it forces him to think and argue about both the word and the picture. Neither should a comic book be chosen as a way to depart from the classic texts of Western civilization, but rather as a way to integrate the study of those texts with Western civilization’s classic images.

Graphic novels should not substitute written texts in satisfying students’ literary arts requirements, especially when the motive behind the assignments is often political in nature. Universities should instead present students with works of literature that will truly challenge their minds and strengthen their ability to reason. Graphic novels can complement, but cannot replace, the canon in fulfilling this role.