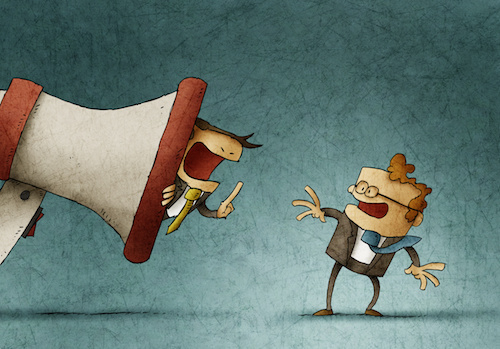 Universities in the United States do not have a monopoly on intolerant and disruptive students. Canada has them too, as shown by a recent incident at McMaster University in Hamilton, Ontario.

The school had arranged for a panel discussion on the subject of free speech and political correctness in Canada. Four speakers were invited and one of them was Jordan Peterson, professor of psychology at the University of Toronto. Peterson is a staunch opponent of what he calls “the radical postmodern left” and its plans for reforming society. That opposition extends to the demand that people use gender-neutral pronouns when referring to transgendered individuals.

When McMaster announced that Peterson would be one of the panelists, opposition quickly mounted, much as was the case with the talk by Charles Murray last month at Middlebury College. The other three panelists backed out when protests were announced by the Peterson resistance.

Professor Philippa Carter expressed concerns over her safety, no doubt prompted by the violent attack by Middlebury protesters that injured Professor Allison Stanger. She said in this Inside Higher Ed story, “I think his views are wrong…. But my decision didn’t have anything with not wanting to be in the same room with him. I had heard there were going to be protests and I wasn’t persuaded that the [student] organization had taken enough precautions around security at the event.”

So, what was meant to be a four-person panel discussion about free speech and political correctness was reduced to just Professor Peterson and that made it much easier for his opponents to shut the event down.

When Peterson attempted to speak, he was drowned out by protesters using air horns, cowbells, and a megaphone. Among their chants: “This is where we draw the line!” and “Trans rights are human rights!” Some audience members asked the protesters to stop, but they refused, displaying the same lack of concern for the rights of everyone else that we witnessed at Middlebury and other schools where intolerance triumphed.

Video of the incident is available here.

The reason why the protesters were so adamant that Professor Peterson should not be allowed to speak is that he will not adopt the gender-neutral speech that “trans” activists demand. He uses the traditional English pronouns “he” and “she” even though the activists say that they are offended when others use those words when referring to them.

Peterson, quoted in the story above, argues that there is “no clinical evidence that gender-neutral pronouns benefit trans people.” Moreover, he resists the coercion of being told to conform to other people’s language conventions—what he calls “compelled speech.”

Because Peterson is one of the few outspoken critics of the gender-neutral language campaign and his opinions are well known in Canada, he has become a lightning rod for protesters, much as Charles Murray is in the U.S. Zealous opponents don’t want him to be able to speak. Disrupting an attempted discussion of free speech and political correctness is supposedly justified since Peterson is so wrong on his views about the proper use of English.

If the protesters had waited until Peterson had finished his talk and then asked why he won’t adopt their gender-neutral, “inclusive” language ideas, a fruitful exchange would have occurred. Peterson would have had to explain his position and defend it against criticism. People in the audience who were undecided on the issue would have heard his reasons; some might have been persuaded while others not.

But if you engage a scholar in public discussion, you’d better be ready to present and defend your own case. Evidently, the protesters were not willing to do that. It is much easier just to make noise to drown out someone you dislike than to prepare a set of arguments and counter-arguments. It is also psychologically safer, since there is always the risk in a public debate that you’ll come off badly—that previously undecided people will decide that your case is weak.

McMaster’s president, Patrick Deane, released a statement after the incident in which he denounced the stifling of debate. Quoted here, Deane said, “Taking the opportunity to listen to a speaker, even one with whom one may vehemently disagree, is an important aspect of education and a cornerstone of academic debate. It has not, therefore, been my approach, nor that of this University, to intervene to shut down events, exclude speakers, or prevent discussion of issues even where controversial topics are under discussion.”

He’s right, but after-the-fact statements of regret from college presidents are not going to stop people such as those who rioted at Berkeley over Milo Yiannopoulos, mobbed Charles Murray at Middlebury, or blew air horns at Jordan Peterson at McMaster. Those who feel that shouting and rioting are acceptable means of registering disagreement aren’t likely to pay any attention to college presidents telling them to respect freedom of speech.

It’s time for college presidents—and indeed educational leaders at all levels—to see that we’re facing a deep educational failure when students won’t listen to someone they’re sure they disagree with and cannot see that they’re doing something wrong in preventing civil discussion. They have been imbued with a primitive, “our side good, your side bad” mentality. That is what college leaders must tackle.

College officials should focus on the grave educational deficiency that some of their students don’t comprehend the crucial role of debate in a civilized society. Instead of larding the curriculum with more “diversity” and “identity” courses, they ought to require students to take a course on the importance of free speech and argumentation.

In that course, students would learn that there can be no progress in society if some people are allowed to use force to silence others. They would learn that their own freedom of speech depends on norms of tolerance and mutual respect. And they would study the history of human intolerance for dissenting ideas, some of which turned out to be perfectly true.

Among the books they’d read should be John Stuart Mill’s On Liberty, with special emphasis on his point that “He who knows only his own side of the case knows little of that. His reasons may be good, and no one may have been able to refute then. But if he is equally unable to refute the reasons on the opposite side, if he does not so much as know what they are, he has no ground for preferring either opinion.”

In sum, the roots of student intolerance must be pulled out. College leaders are in a position to do that. They should recognize this as perhaps their highest priority.