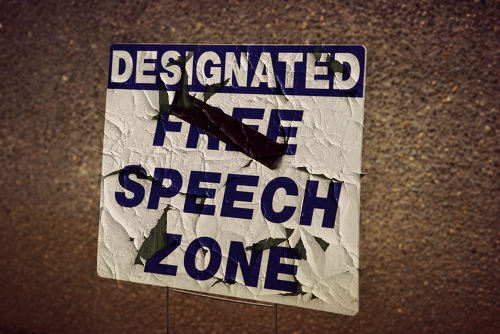 Hostility to free speech has become a salient characteristic of American college campuses.

Speech codes that make it dangerous for students (or anyone else) to say things that might be regarded as offensive or “harassing” are all too common—even though the codes have been found to violate the First Amendment when challenged in court.

Another means of limiting free speech that college officials have used is the “free speech zone” tactic. That allows them to claim that they aren’t against students exercising their First Amendment rights, but are merely imposing a “reasonable” regulation on them. Policies limiting free speech only to small zones on campus are distressingly common. The Foundation for Individual Rights in Education (FIRE) has concluded that roughly one in six colleges and universities have them.

Can administrators at public colleges and universities get away with this? And can they give themselves unfettered power to decide who may use their speech zones and for what purpose? A new case raises those questions.

Officials at Grand Valley State University (GVSU) in Michigan have imposed a speech zone policy. Under university rules, students have full expressive rights, but only inside two very small areas on campus amounting to about .02 percent of its total area.

Moreover, students must first obtain permission from officials before they engage in any speech or expressive activity within the zones. Those officials have complete discretion to approve or reject requests to use the free speech zones.

In short, speech is not free at GVSU, but is subject to strict administrative regulation. For those reasons, FIRE gives GVSU a “yellow” rating, meaning that it has “at least one ambiguous policy that too easily encourages administrative abuse and arbitrary application.”

In October, several GVSU students affiliated with the group Turning Point USA were peacefully talking with other students about the Constitution’s protection of free speech against governmental interference. They also encouraged them to write their ideas about free speech on a large beach ball.

Those activities did not in any way obstruct or interfere with anyone, but they took place outside of the zone.

Before long, administrators and campus security personnel approached the students and told them that they were in violation of the speech zone policy. Unless they stopped immediately, they were told, they’d be arrested for trespassing and subject to penalties under the university’s Code of Conduct for Students—penalties that could be as slight as a written warning or as severe as expulsion.

Rather than meekly complying with the administration, the students are taking them to court, with the able legal assistance of the Alliance Defending Freedom (ADF).

ADF’s complaint (available here) in Turning Point USA v. Trustees of Grand Valley State sets forth all the pertinent facts, including the one that reveals the university’s hypocrisy.

Following the presidential election, groups of students protested against Donald Trump’s election outside of the two free speech zones, but were allowed to continue without interference by school officials. Thus, GVSU not only infringes upon students’ First Amendment rights, but compounds the injury by engaging in viewpoint discrimination, a violation of their rights to equal protection of the law under the Fourteenth Amendment.

The university might respond that its policy does not violate the First Amendment rights of students because it is a reasonable restriction on speech. It is true that the First Amendment doesn’t forbid every possible speech restraint, but allows those that reasonably restrict the “time, place, and manner” of speech. Other schools have tried claiming that their speech zones are merely time, place, manner restrictions—and lost.

For example, in University of Cincinnati Chapter Young Americans for Liberty v. Williams, Judge Black of the Western District of Ohio ruled against the university’s speech zone policy (which limited free speech to an area less than one tenth the size of a football field). He wrote that the university’s theory “is an anathema to the nature of a university which is ‘peculiarly the marketplace of ideas’ and runs contrary to the Supreme Court’s holding that ‘the vigilant protection of constitutional freedoms is nowhere more vital than in the community of American schools.’” (Citing Healy v. James, 408 U.S. 169.)

Grand Valley State officials might think that their case will fare better in the courts, but it’s hard to see any reason to believe so. Maybe, instead of wasting a lot of money on litigation, they will choose to change their policy.

That has happened before.

When West Virginia University adopted a speech zone policy similar to GVSU’s in 2002, FIRE’s Greg Lukianoff wrote to the president, encouraging him to make “the whole campus a free speech zone, with modest restrictions of time, place, and manner to protect the right of people to conduct their normal activities. WVU should return to its function of cultivating and spreading ideas, rather than limiting them.” WVU subsequently did so.

The GVSU case was filed on November 29 and the university has until February 3 to reply to the complaint. Will school officials waste taxpayer money in a fight to protect their authority to control who may say what and where? Or will they admit that on a university campus, free speech should be the rule, not the exception?