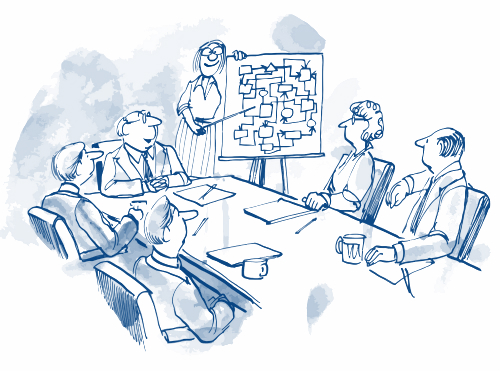 Politics is on many people’s minds this year, so this is a good time to write about that topic.

While shared governance sounds like an oxymoron, large, bureaucratic universities need to ensure an effective interplay between governing boards, administrations, and faculties. But contrary to what some faculty members think, the idea of shared governance does not mean equal authority.

In the interdependent university, Faculty Senate organizes the faculty to facilitate policy in areas such as curriculum and scholarship, and to represent the faculty on issues where collaboration is necessary (e.g. budgets). Required courses and new course approvals are examples of topics in the purview of a Faculty Senate. This all sounds like a reasonable idea, but it comes with a host of issues.

The idea of a senate representing faculty members is an old one, but in the contemporary university full of credentialism and administrative bloat, the relevance of that body is questionable.

With that in mind, I’m entering my fourth year on Faculty Senate at the University of Southern Indiana. The experience has given me much to reflect on, especially because I had the opportunity to be Senate Chair in the 2014-2015 year.

Cynics claim that faculty senates are archaic, useless bodies. From experience, I can’t say I totally disagree, which will make many readers happy. A quick Google search will unearth articles with titles such as “Thankless But Vital,” where a former senate chair asserted:

In my first year, the senate decided to publicly comment on Indiana State Resolution HJR-6 (which defined marriage as one man and one woman). TV cameras showed up, everyone made public statements, and many felt really important.

Yet, as a few of us unsuccessfully pointed out, our handbook specifically forbids faculty from using University premises for organized political activity. Yes, even here in Middle America, faculty members are not immune to the general trend of academic leftists who misuse the university to advance their political goals. We haven’t disinvited any speakers yet, but I worry that is coming.

As chair, aside from a heated discussion over whether the administration went over the faculty in implementing an early alert progress reporting system, the workload for senate was quite light. Thus, as someone who deplores wasting time in pointless meetings, I spent my “political capital” attempting to initiate discussion on how to make the senate more relevant.

There are a few professors who relish the opportunity to be on faculty senate, but many others feel like they “wound up on it” because their door was open at the wrong time. Senate can also attract Marxists who want to act out revolutionary fantasies. All those variables yield much flexing in the mirror but little in the way of actual achievement.

From the chair, I saw the senate as lacking thematic goals to rally around and having poor internal communication. Two-year appointments allowed past presidents to disengage after their term, which hurt organizational memory. Subcommittees report once a year, which stymies the ability to act quickly. We needed to become leaner and meaner.

I didn’t have all the answers, but from side conversations, I knew many senators had much to offer the discussion. Unfortunately, while some fruitful discussion took place, my initiative went nowhere.

If senate were a high priority for everyone, there would have been a sense of urgency about making it more useful. I left the table, however, with a sense that many did not want it to be better so much they just liked having another place to talk. Academics are fantastic at critiquing, not always good at creating.

Management guru John Maxwell notes that leading an unpaid volunteer organization is one of the toughest jobs in management. I concur wholeheartedly.

If my university’s Faculty Senate did not meet for the next year, it’s possible that nobody would notice. Much time in senate meetings is spent deliberating the finer points of Robert’s Rules of Order and wordsmithing motions for the meeting minutes. I appreciate the elegance of Robert’s Rules, but for people who are prone to getting caught up in minutiae, they are like drinks for a recovering alcoholic.

There is no hope for getting into important academic matters (such as how to elevate standards or strengthen the curriculum) when there are some in the room wondering who made a motion and whether we need two weeks to ponder it.

This was the case during my first year when changes were made to USI’s core curriculum. While that sounds like a fruitful undertaking, the end product kept the same required courses, merely renaming their corresponding categories. “The Arts” and “History” now fall under “Ways of Knowing,” yet students still can graduate with one course in history and minimal study of Western Civilization. Furthermore, it failed to address the many students who don’t understand why they have to take a core curriculum. “How will this help me get a job” is a common phrase I hear from my advisees.

Looking back on those meetings, there were so many cooks in the kitchen organizing the shelves that there was no hope of productive reform getting off the ground.

So yes, the experience was time-siphoning, unproductive, and painful—but only if I focus on the bad.

Faculty senate is an acquired taste that faculty members should try at least once. I learned a great deal about my university from serving on the senate. Senate gives you access to important people. If you don’t have the Marxist/Union “us against them” mindset, such an experience can be a great learning experience.

While it is common to believe that everything that happens in higher education is lefty-approved—such as the HJR-6 ordeal—I have experienced some diversity of thought. After a student with a concealed carry permit accidently carried a gun to a classroom, not all of my colleagues were in favor of “gun free zone” signs on campus. When students from Brother Jed pestered quite a few students on campus, most senate members respected the views of the Foundation for Individual Rights in Education when discussing a proposal for a statement of free speech. (A statement about that is now in the works, but who knows when it will be finished, if ever.)

I developed great rapport with my provost through one-on-one meetings and by demonstrating my composure (most of the time) during senate meetings. Senate meetings are open to the public and the chair is a bit of a shock absorber when faculty get upset. I learned not to add fuel to the fire because what I say can wind up at a minimum in the campus newspaper.

I also had the opportunity to network with our board of trustees at a level I’d never envisioned. Even though it was more of a formality, the senate chair gives a report at all trustee meetings and attends an event in Indianapolis with state legislators. I was pleased to find that the USI trustees are genuinely interested in students and learning.

My experience leads me to conclude that faculty senates are de facto social clubs where people don’t actually socialize. Professors lose interest in this service role when they feel powerless, especially when their “service” doesn’t count for much toward promotion or tenure.

Some MBA Programs Are an Overpriced Credential, but Others Give Real Value

Are Students Addicted to Distraction?