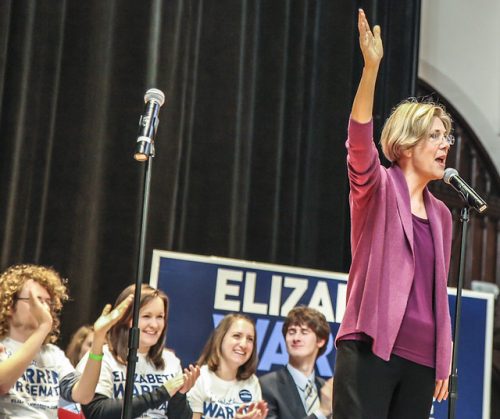 The time-honored American tradition of outlandish political promises continues apace. Now, the spotlight is on student debt. Democratic presidential candidate Elizabeth Warren added to the debate recently when she put forward a proposal to cancel $640 billion worth of federal and private student loans. Warren touts her plan as a way to boost the economy, redistribute wealth, and help struggling borrowers.

But as justifications for canceling nearly half the outstanding $1.5 trillion balance of student debt, these arguments are woefully inadequate.

To her credit, Warren has recognized and partially addressed one of the major problems with canceling all outstanding student debt. Since student loans finance education, and education is associated with higher earnings, student debt is concentrated among high-income people—meaning that the benefits of loan forgiveness would flow disproportionately to the rich. Warren proposes forgiving smaller amounts of student debt for richer households, partially addressing this issue.

Though this feature makes Warren’s plan slightly less problematic than other loan forgiveness proposals, it is still inherently flawed as a policy. That wealthier families benefit more from it only scratches the surface of the problems with student loan forgiveness. Nearly every argument offered in its favor is wrong.

The first argument Warren offers for her debt forgiveness plan is that it would boost the economy. She writes that student debt is “an anchor on our economy” which is “reducing homeownership rates” and “leading fewer people to start businesses.” Boiled down, this argument essentially stipulates that student loan payments are keeping borrowers from spending their money on other things that would spur economic growth, such as home mortgages or business formation.

Forgiving student debt would undoubtedly increase purchasing power for the people receiving forgiveness. But the money required to pay for debt cancellation has to come out of the economy somewhere else, either through taxes or borrowing. Student debt forgiveness might provide the economy a temporary sugar high as debtors spend the windfall they’ve received from canceled loan payments, but eventually the bill has to be paid.

Spending now and paying later isn’t so bad, though, if the spending finances new investments that pay dividends later on. Perhaps spending on education fits this criterion: Proponents of large increases in spending on higher education programs argue that college is an investment in the future, so the future returns from a better-educated workforce are worth the daunting price tag today.

But one cannot use this reasoning to justify student debt forgiveness because it does not encourage any new investments in education. By definition, everyone with a student loan has already been to college and either received a degree or dropped out while attempting to earn one. Their educational decisions, which will determine whether tomorrow’s economy gets a boost from their learning, have already been made. With the cake already baked for those borrowers, there’s little that student debt forgiveness can do to encourage productive future investments.

It’s true that student debt cancellation as formulated under Warren’s plan would redistribute wealth downwards along the income ladder (though experts worry about the unintended consequences her wealth tax would have on the economy). But as a form of wealth redistribution, student loan forgiveness is inefficient, arbitrary, and unfair.

This article will remain agnostic on the questions of whether redistribution of wealth is a good thing and how much redistribution is appropriate. But suppose, for argument’s sake, that policymakers desire to redistribute $640 billion—the total cost of Warren’s loan forgiveness plan—from the rich to everyone else. Why should that $640 billion be redistributed on the basis of how much student debt each household has?

Warren’s student loan forgiveness plan, along with many others like it, is a solution in search of a problem.

Dividing up the $640 billion based on the amount of student debt each person has leaves some poor and middle-class families with windfalls, and others with nothing. Consider three people who each earn $35,000 per year, and therefore have roughly the same position on the economic ladder. One attended an expensive private college and has $50,000 in debt, one went to community college and owes $10,000, and the third did not attend college and owes nothing. Though these people all have the same income, Warren’s plan would give $50,000 to one person, $10,000 to another, and nothing to the third.

Moreover, lower-income people are less likely to have attended college in the first place, and thus are less likely to have student debt to cancel. Though she includes limitations on forgiveness for the highest earners, the primary beneficiaries of Warren’s plan are still upper-middle-class professionals, who need assistance far less than their peers further down the income scale. The highest-income quartile holds nearly three times the amount of student debt as does the lowest-income quartile.

Finally, if redistribution is the goal of student loan forgiveness, why is student debt part of the plan at all? Student debt is not a strong predictor of economic need. A more effective redistribution program—should policymakers see the need for it—would simply pick a household income threshold and divide the money equally among every person below it. There’s no reason debt cancellation is superior to a redistribution program of similar magnitude that allocates benefits purely by economic status, rather than indebtedness.

The final argument offered in favor of debt cancellation is that it will help borrowers struggling to repay their student loans. Near-universal loan forgiveness is quite an inefficient way to go about that, however, because most borrowers are not struggling—in fact, 70 percent will pay off their loans within the standard 10-year time frame.

A better way to help the minority of borrowers who have trouble meeting their loan obligations is to make them aware of the existing options to make their debt more manageable, such as repayment plans that tie monthly loan payments to income. According to Department of Education surveys, less than one-third of college students even know this is an option; surely we should try to increase awareness before we embark on a $640 billion loan forgiveness adventure.

Warren’s student loan forgiveness plan, along with many others like it, is a solution in search of a problem. For $640 billion, it will neither boost the economy, nor encourage investments in education, nor fairly redistribute wealth, nor efficiently help struggling borrowers. It is a third-rate solution to every problem it supposedly addresses.

Student loan forgiveness might succeed as a presidential campaign’s bumper sticker, but it fails as a serious policy.