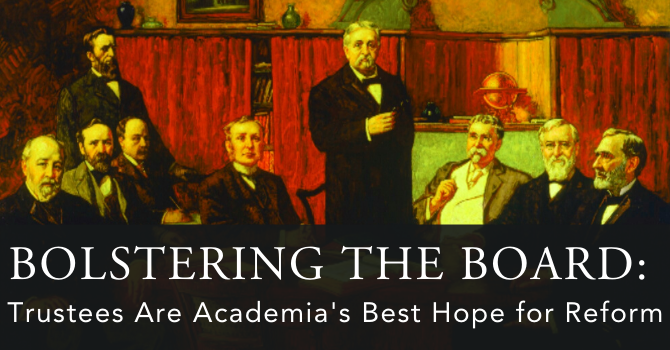 Academia is a troubled institution plagued by financial problems, falling academic standards, and poor educational outcomes. Especially concerning is its politicization; it increasingly sows racial discord, advocates for anti-American and anti-Western perspectives, and promotes socialism. At times, it even rejects its most important value—the pursuit of truth—for a distorted vision of social justice.

How has such a heralded institution come to such a dismal reality? And can it be restored to a more promising future?

In a newly published report titled Bolstering the Board: Trustees Are Academia’s Best Hope for Reform, the Martin Center’s Jay Schalin provides an answer to the first question and solutions for the second.

He does not just recommend tinkering around the edges as do so many analyses of higher education. Instead, he investigates the basic incentive structure that underlies academia. As a result, the report is bold, imaginative, and goes right at the single biggest obstacle to higher education reform—today’s system of “shared” academic governance thwarts positive change.

Colleges and universities almost always subscribe to shared governance, in which each of the three main stakeholder groups—boards of trustees, administrations, and faculty—have control over their own sphere of activities and influence over other spheres. It has resulted in a tangled mess of distortions, inefficiencies, perverse incentives, and the vesting of special interests. “Shared governance is a sacred cow that needs to be gored,” Schalin writes.

The complexity of shared governance clogs the gears of decision-making, according to Schalin. Instead of leadership, academia runs on manipulation, horse-trading, secrecy, and intimidation.

Making things worse, given the steady infusion of government dollars propping it up, is academia’s lack of a natural correcting force, the way profit and loss reward and punish decisions in the private sector. Nobody is in control; as a result, academia is permitted to continually slide in negative directions.

Legally, for the most part, boards are still the ultimate authorities. The statutes and charters that put them there are still in force. But, in practice, they have been shoved aside by more self-interested factions. Decisions made at lower governance levels are given no scrutiny before boards vote them into policy. And policies enacted at the board level are ignored by consensus or by obstinate individual employees—or are negated by the need to conform to accrediting agencies or federal guidelines. Today, most college and university boards have been reduced to rubber-stamp committees.

Some may say nothing can be done: academia is just naturally organized in this way. It’s how it has always been, stretching all the way back to England, or so the story goes. Furthermore, the faculty must control the curriculum or else academic freedom will disappear and the search for truth will be frustrated, just like it was back in the 19th century.

However, Schalin explains that those are false narratives.

For the first 250 years of North American higher education, dating back to 1636, college governance was conducted by “external lay boards instead of internal governance by scholars.” Furthermore, shared governance has outlived the reason for which it developed: to protect free inquiry (or, if you prefer, academic freedom). Today, the greatest threat to academic freedom comes from within academia, not from outside as occurred in the past. Additionally, there are now many other protections for academic freedom that didn’t exist in the period that shared governance came to be.

As for how to restore higher education, although the situation is dire, it is not yet hopeless. Schalin also provides solutions, most of them centered on restoring control to the governing boards of trustees, regents, governors, and visitors.

The main reason that boards need to be in control for higher education, Schalin says, is that many important decisions in higher education must be made at the societal level. The board is the only major stakeholder that is more in tune with the rest of society than with academia; it is they who should have the final word on the intellectual direction of the institution. The faculty originally was able to force shared governance because they had intellectual expertise that the board lacked; it was assumed that such expertise was necessary to make good decisions about the curriculum. But it is becoming all too apparent that such expertise is often subject to tunnel vision and groupthink.

The latter is especially a major problem in academia: Studies of faculty voter registrations reveal a constant movement toward the political left. Republicans are already a rarity in most departments. And voter registrations hardly scratch the surface of the extreme degree of radicalization that is occurring. Somebody at a higher level of authority must step in and say “enough;” that can only be the boards.

Some of Schalin’s solutions are already commonplace, some are new. Some can be implemented incrementally, while others are foundational. One that will cause outrage in academia is requiring university trustees, officers, and employees to take a loyalty oath: “not mandating allegiance to any particular ideology or religion, but to academia’s most treasured values—the pursuit of truth and the free expression of ideas.”

The board’s retreat from their obligation to ensure a quality education has proven disastrous.

Such a requirement sets a powerful positive tone. It moves academia away from its disturbing social justice trend and back toward its real goal, the pursuit of truth. It also gives justification to remove those who would silence serious discussion.

Two of Schalin’s most promising ideas for reform are to bolster board oversight over the academic side of operations and to give boards a source of information other than their school’s or system’s administration.

The faculty has long dominated educational and intellectual matters. They hire and promote faculty, create courses, and help to determine the general education curriculum. While boards have a right—or even a fiduciary duty—to closely supervise these activities, they almost always sign off on faculty actions without even a cursory investigation. The board’s retreat from their obligation to ensure a quality education has proven disastrous; they are the ones who can stop horrendous hires performed by radicalized academic departments before the prospective faculty member has academic freedom protections.

Administrations have natural possession of the most minute information on their campuses. Board members, on the other hand, are naturally removed. As a result, administrators are able to manipulate board decision-making through their control of the information; interrupting their monopoly over information is paramount to good board governance.

Schalin writes that the best way to do so is to let boards hire their own staff so that they are not beholden to the administration in any way. (Today, most board staff are shared with administrations, creating a conflict of interest.) Furthermore, at least one board staff member should be a knowledgeable policy expert who can “not only inform the board about higher education’s innovations, trends, traditions, and ideals but should conduct new member orientation and ongoing training for all members.”

Of course, no matter how well governance policies are crafted, a major part of the problem is getting good trustees who understand how important it is to reform the system. And that may not be easy, according to Schalin. Private institutions tend to have “self-perpetuating” boards, in which the trustees elect their own successors, and they tend to choose people who will continue their current practices. At many schools, that spells trouble: “Many self-perpetuating boards are actively attempting to dismantle their school’s ideals and traditions, aggressively replacing them with the ideology of the left,” he writes.

Public university boards are usually politically appointed; trustees tend to reflect the politics of the state. In many states that are politically dominated by the left, reform of public universities is likely out of reach.

Yet, there is still some hope. The spirit of reform is growing in many states; good trustees are sometimes appointed by politicians. And the alumni—who tend to be less radical than the administration or faculty—could play a bigger role at both private and public schools. Additionally, many less-prestigious private institutions are struggling financially and may be more amenable to serious change than they historically have been.

Plus, if the position of academic trustee is treated seriously, perhaps it will attract better candidates. Too often today, trustees are appointed with a sense of mild contempt as boards are crafted for easy manipulation rather than for leadership.

Schalin even provides a solution if all else fails: Voters and alumni should stop giving universities their money and create new independent colleges with good governance policies and procedures.

For anybody with an interest in reforming higher education, Schalin’s Bolstering the Board is a must-read. Rarely does anyone approach university governance with such originality and depth.