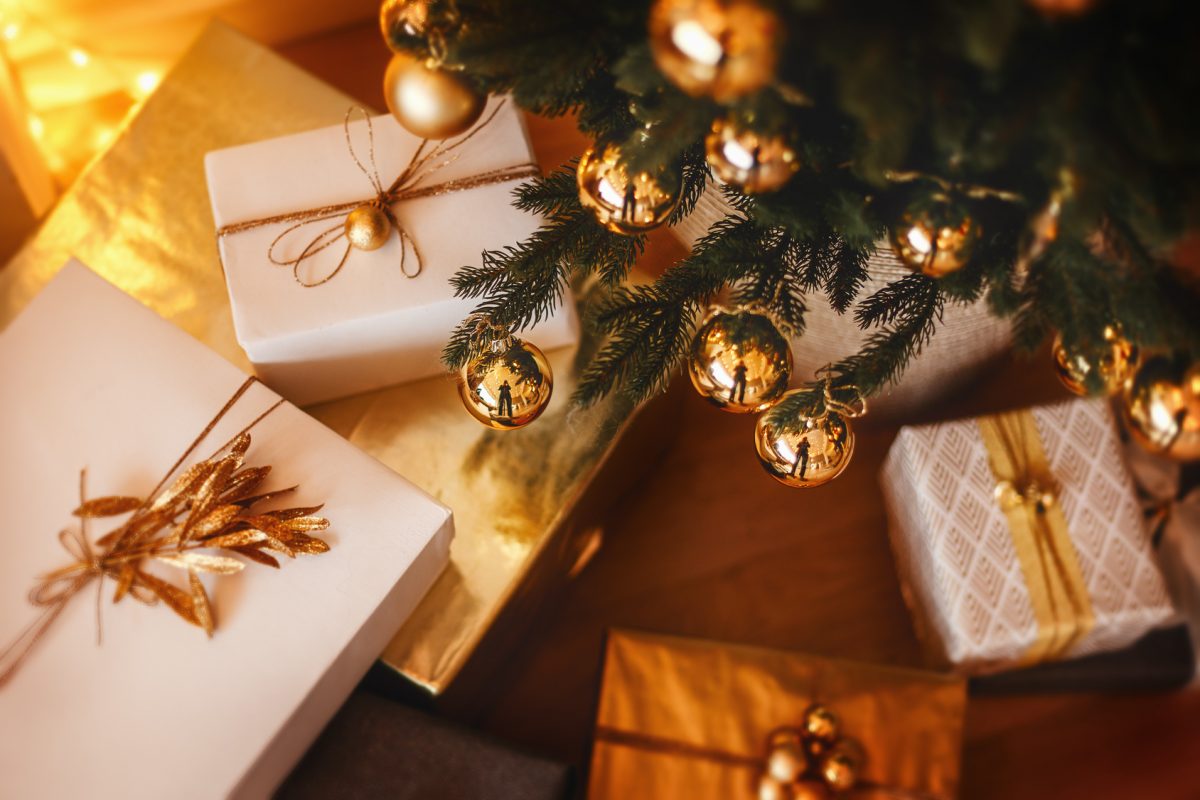 When I was a child, I always thought that some of the best presents under the tree were books. Whether it was a matching set of Laura Ingalls Wilder’s Little House books or a beautiful hardcover copy of Pride and Prejudice, books were always a delight. One year, I received Tolkien’s The Lord of the Rings—a masterpiece in three parts that I couldn’t put down. What better way to spend the rest of the chilly Christmas vacation than sitting by the fire with a stack of new books?

Not much has changed since then. I still love getting books for Christmas, and others on the Martin Center staff agree. This year, we’ve compiled a list of ten books we’d love to wake up to tomorrow. Some are well-known classics that we’d like to revisit. Others are new additions to the higher education conversation. All of them would be welcome additions to the Martin Center library.

Education and Jobs: The Great Training Robbery by Ivar Berg and Sherry Gorelick 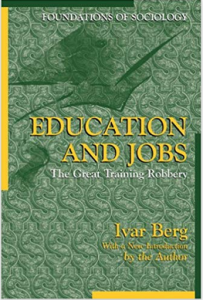 From the publisher: “In this famous study, selected by the New York Times Book Review as one of the most important social science books of 1971, the author argues that the familiar correlation between educational training and job performance is a myth and that the upgrading of the supply of labor is meaningless unless we reconsider the nature of the demand. A lengthy new introduction by the author extends his critique into the 1990s. Originally published by Praeger in 1970.”

Searching for Utopia: Universities and Their Histories by Hanna Holborn Gray 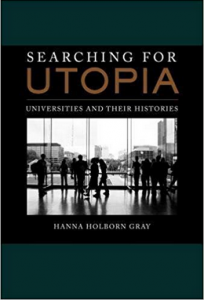 From the publisher: “In Searching for Utopia, Hanna Holborn Gray reflects on the nature of the university from the perspective of today’s research institutions. In particular, she examines the ideas of former University of California president Clark Kerr as expressed in The Uses of the University, written during the tumultuous 1960s. She contrasts Kerr’s vision of the research-driven ‘multiversity’ with the traditional liberal educational philosophy espoused by Kerr’s contemporary, former University of Chicago president Robert Maynard Hutchins. Gray’s insightful analysis shows that both Kerr, widely considered a realist, and Hutchins, seen as an oppositional idealist, were utopians. She then surveys the liberal arts tradition and the current state of liberal learning in the undergraduate curriculum within research universities. As Gray reflects on major trends and debates since the 1960s, she illuminates the continuum of utopian thinking about higher education over time, revealing how it applies even in today’s climate of challenge.”

Education in a Free Society by Anne Husted Burleigh 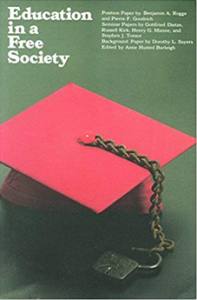 From the publisher: “A position paper by Benjamin A. Rogge and Pierre F. Goodrich leads off this fine collection advocating an educational system based strictly on private and voluntary institutions. Anne Husted Burleigh is a writer and a contributing editor for Crisis.” 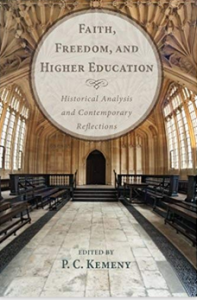 From the publisher: “Faith, Freedom, and Higher Education argues that Christianity can still play an important role in contemporary American higher education. George M. Marsden, D. G. Hart, and George H. Nash, among its authors, analyze the debate over the secularization of the university and the impact of liberal Protestantism and fundamentalism on the American academy during the twentieth century. Contributors also assess how the ideas of Dorothy Sayers, C. S. Lewis, Wendell Berry, and Allan Bloom can be used to improve Christian higher education. Finally, the volume examines the contributions Christian faith can make to collegiate education and outlines how Christian institutions can preserve their religious mission while striving for academic excellence.”

Inside American Education: The Decline, the Deception, the Dogmas by Thomas Sowell 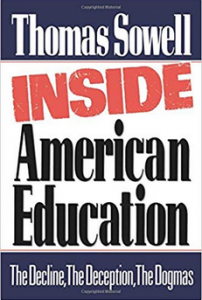 From the publisher: “An indictment of the American educational system criticizes the fact that the system has discarded the traditional goals of transmitting knowledge and fostering cognitive skills in favor of building self-esteem and promoting social harmony.” 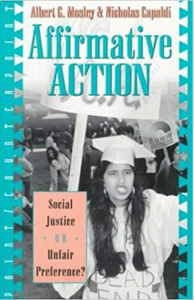 From the publisher: “In this book, two distinguished philosophers debate one of the most controversial public policy issues of the late 20th century. Each begins by making a case for or against affirmative action, laying out the major arguments on both sides. Each author then responds to the other’s essay. Written in an engaging, accessible style, Affirmative Action is an excellent text for junior level philosophy, political theory, public policy, and African-American studies courses as well as a guide for professionals navigating this important debate.”

Beyond the Hoax: Science, Philosophy, and Culture by Alan Sokal 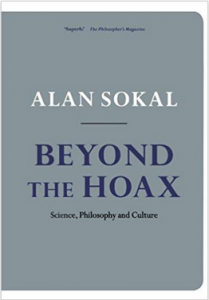 From the publisher: “Sokal is one of the most powerful voices in the continuing debate about the status of evidence-based knowledge. In Beyond the Hoax he turns his attention to a new set of targets – pseudo-science, religion, and misinformation in public life. ‘Whether my targets are the postmodernists of the left, the fundamentalists of the right, or the muddle-headed of all political and apolitical stripes, the bottom line is that clear thinking, combined with a respect for evidence, are of the utmost importance to the survival of the human race in the twenty-first century.’ The book also includes a hugely illuminating annotated text of the Hoax itself, and a reflection on the furor it provoked.” 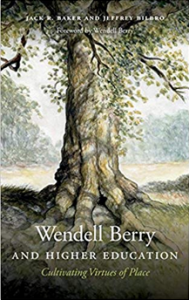 From the publisher: “Drawing on Berry’s essays, fiction, and poetry, Jack R. Baker and Jeffrey Bilbro illuminate the influential thinker’s vision for higher education in this pathbreaking study. Each chapter begins with an examination of one of Berry’s fictional narratives and then goes on to consider how the passage inspires new ways of thinking about the university’s mission. Throughout, Baker and Bilbro argue that instead of training students to live in their careers, universities should educate students to inhabit and serve their places. The authors also offer practical suggestions for how students, teachers, and administrators might begin implementing these ideas.”

The Splintering of the American Mind: Identity Politics, Inequality, and Community on Today’s College Campuses by William Eggington 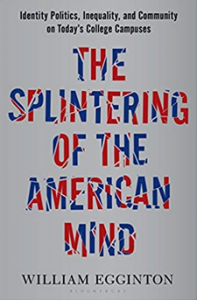 From the publisher: “A timely, provocative, necessary look at how identity politics has come to dominate college campuses and higher education in America at the expense of a more essential commitment to equality….Egginton argues that our colleges and universities have become exclusive, expensive clubs for the cultural and economic elite instead of a national, publicly funded project for the betterment of the country. Only a return to the goals of community, and the egalitarian values underlying a liberal arts education, can head off the further fracturing of the body politic and the splintering of the American mind.”

Mission of the University by José Ortega y Gasset 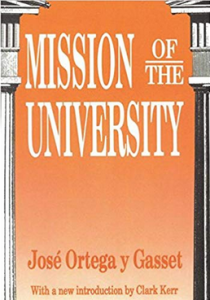 From the publisher: “In this volume Ortega sought to answer two essential questions: what is the knowledge most worth knowing by all students and what is the function of the university in a modern democracy? Basing his answers on his own deep personal culture and an extensive knowledge of the various European university systems, Ortega defined four primary missions: the teaching of the learned professions, the fostering of scientific research, training for political leadership, and finally the creation of cultured persons with the ability to make intellectual interpretations of the world. Ortega’s understanding of “general culture” is set out in great detail here. He meant an active engagement in ideas and issues that were both historical and contemporary. His concern is with the classical problems of justice, the good society, who should rule, and the responsibilities of citizenship.”