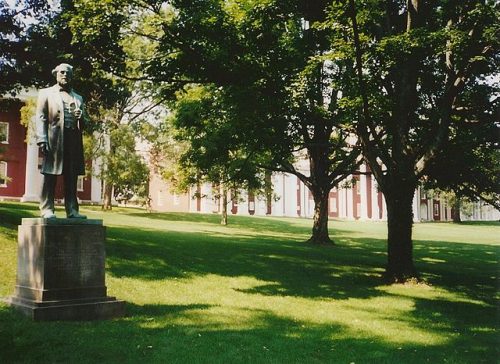 The violent events in Charlottesville, Virginia in 2017 have fueled a deep-seated leftist desire to re-write American history. Demands to topple statues, remove portraits, rename buildings, and repudiate founders—all in an effort to cleanse any objectionable reality from our history—have reached a fever pitch.

Consider recent events at my college alma mater, Washington & Lee University. Founded in 1749, W&L has a history that is longer than most American colleges and as rich as any. Established as Augusta Academy on what was then the western frontier of colonial America, the school was elevated from obscurity in 1796 by a gift from General George Washington. The name was promptly changed to Washington College and it survived as a provincial, liberal arts college until the outbreak of the Civil War. With the war-torn devastation of the Shenandoah Valley, Washington College was threatened with imminent extinction in 1865.

Shortly after Appomattox, in an inspired action, the trustees approached General Robert E. Lee with an offer of the presidency of Washington College. Lee had already received several far more lucrative and prestigious offers from corporate interests seeking to capitalize on his status as a hero, but he recoiled at lending his good name to any endeavor for which he did not feel qualified. Instead, he intended to use his final years to heal the sectional wounds inflicted by the war. Lee’s final five years rescued the college and did much to bring healing to the nation. After Lee’s death in 1870, the college became Washington & Lee University and has become one of America’s great liberal arts colleges.

For almost 150 years, the legacy of general Lee appeared well established; however, in the aftermath of the Charlottesville incident, the Board recently announced several troubling changes. Portraits of generals Washington and Lee in military uniform will be removed from Lee Chapel, fire doors will be installed in Lee Chapel to screen off the famous recumbent statue of Lee during university events, and the names of Robinson Hall and Lee-Jackson House will be changed. Presumably, such a screen will ensure that no student feels threatened or uncomfortable during university events.

The university also plans to hire a director of institutional history whose job it will be to tell the college’s story. This announcement has given rise to concerns about possibly re-writing the college’s history. In addition, the director of institutional history will advise on how best “to reclaim the original vision of the chapel.” Lee oversaw the construction of the chapel, relentlessly promoted daily attendance at religious services for students, and regularly seated himself prominently in the front pew. His vision was clear: “I dread the thought of any student going away from the college without becoming a sincere Christian.” This is probably not the “original vision” sought by the new director.

Lee became a hero as a Confederate general and, without that achievement, he would have never been president of Washington College. Lee’s transition from military hero to civilian educational leader defined him as a major historical figure. Similarly, George Washington’s gift to the college was a direct result of his military leadership in the American Revolution. To honor his military service to the nation, the state of Virginia granted stock to Washington in the James River Canal Company, which he, in turn, gave to the college. To remove their portraits represents a repudiation of these men’s military service and is a denial of the university’s history.

For generations, the main campus has included Lee-Jackson House and Robinson Hall for sound historical reasons. Lee-Jackson will now be known as Simpson House, in honor of the school’s first tenured female professor. Robinson Hall honored John Robinson in 1826 in commemoration of “the largest legacy received by a college below the Potomac up to that time.”  A bachelor, Robinson bequeathed to the college his entire estate, which included several slaves. While no one would defend Robinson as a slaveholder, it is quite possible that, without his gift, Washington College would not have remained open in the antebellum years and would not exist today. Robinson Hall will now be known as Chavis Hall to commemorate John Chavis, the first black American to graduate from any college (Washington College, 1799). The university should honor Chavis and Simpson, but not by “cleansing” Robinson and Lee-Jackson from the school’s history.

Walter Williams, a professor at George Mason University and a black American scholar, has written persuasively on this topic. I regret that W&L has not heeded his warning:

Slavery is an undeniable fact of our history. The costly war fought to end it is also a part of the nation’s history. Neither will go away through cultural cleansing. Removing statues of Confederates and renaming buildings are just a small part of the true agenda of America’s leftists. The job of tyrants and busybodies is never done. When they accomplish one goal, they move their agenda to something else. If we Americans give them an inch, they’ll take a yard. So I say, don’t give them an inch in the first place.

The Fight Being Waged on the Academic Battlefield