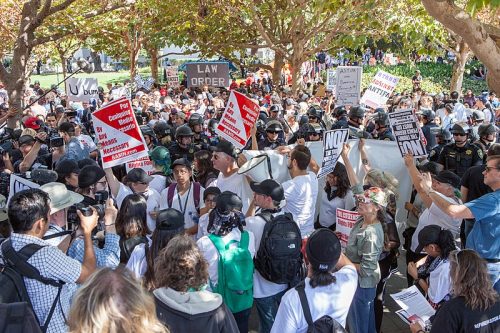 He is the president of a student group at Williams called Uncomfortable Learning (UL), which has the mission of bringing to campus notable speakers who can articulate a wide range of perspectives.

Recently, UL sponsored a talk by philosophy professor Christina Hoff Sommers, who is a well-known critic of many of the claims of feminism (see her video blog, The Factual Feminist). She calmly and rationally argues a case that many young liberal students find jarring. Her opinions clash with so much they’ve been taught. That is what makes her an ideal campus speaker.

How did the students at Williams react to Sommers? Many of them reacted like angry children, snickering, yelling insults, and ranting instead of listening, thinking, and asking questions.

You can see the video of Professor Sommers’ talk here.

Responding to her treatment, Wood wrote a superb piece in the Nov. 17th Wall Street Journal entitled “At Williams, a Funny Way of ‘Listening.’” He expressed his disappointment in both the students and the Williams administration.

“After one student shouted ’f-you!’ at the speaker, an administrator seemed to affirm the heckler’s veto, signaling to me with a timeout gesture that it was time to end the event,” Wood wrote. “In an effort to give as many students as possible a chance to engage the speaker, I approached the administrator and negotiated another 15 minutes for questions. But the remainder of the Q&A consisted mostly of bellicose rhetoric and long-winded stories of personal trauma, many of which had little to do with the topic at hand.”

Most disappointing of all was the response of the school’s president, Adam Falk. Wood explains that following that UL event, Falk wrote in the Washington Post that “our students listened closely, then responded with challenging questions and in some cases blunt critiques.”

The problem with that characterization, Wood wrote, is that it “grossly misrepresents what happened.” Many students acted disruptively during Sommers’ talk and as for those “challenging questions,” there were far more “personal attacks, directed either at her or at me for inviting her.” Perhaps the most egregious affront of all was that a group of students yelled that she was “stupid, harmful, and white supremacist.”

Christina Hoff Sommers is not stupid, not a white supremacist, and if she’s “harmful,” that harm is confined to the small minds of college students who can’t stand it when people disagree with the beliefs that have been instilled in them.

Wood himself is getting blowback from some of his fellow students for what they regard as his treasonous act of bringing to campus a speaker who disagrees with the leftist belief system. He reports that members of the Black Student Union are shunning him. “I expect this kind of recrimination. But I can’t speak for other students who’ve told me they worry about how their interest in my group (UL) may affect their relationship with their black classmates,” he wrote.

“In my time at Williams, I cannot name a single conservative speaker that has been brought to campus by the administration.”

The intolerant academic Left has a determined foe in Zachary Wood and that is especially remarkable because he describes himself as a liberal Democrat. Last summer he testified before the Senate Judiciary Committee’s hearings on the state of free speech on our college campuses. This Heterodox Academy article contains a link to the video of his testimony.

Alerting the members of the Committee (and anyone else who is willing to listen) about the way college campuses have become hostile terrain for anyone who questions leftist beliefs, Wood stated, “At Williams, the administration promotes social tolerance at the expense of political tolerance. In my time at Williams, I cannot name a single conservative speaker that has been brought to campus by the administration. In classrooms, liberal arguments are often treated as unquestionable truths. In some cases, conservative students even feel the need to refrain from stating their opinion in fear of being shutdown, or strongly disliked for doing so.”

It’s a deplorable state of affairs when college students – especially at an elite school – won’t listen respectfully to speakers and indulge in virtue signaling by turning their backs on other students who favor dialogue and civility.

Wood is a senior, so it will fall to other students to keep up the battle to bring non-leftist speakers to Williams after he graduates. Will others be willing to face the slings and arrows that leftist zealots direct at anyone who dares to challenge their beliefs and tells them that they ought to listen to what conservatives and libertarians have to say?

Williams will be much the worse off if no one will continue to speak up for “Uncomfortable Learning” the way Zachary Wood has.